Rebecca Roanhorse has gifted the literary world and middle school readers with her epic tale of the courageous Nizhoni Begay, and how she finds the ability to accept herself and save the world from monsters in Race to the Sun. 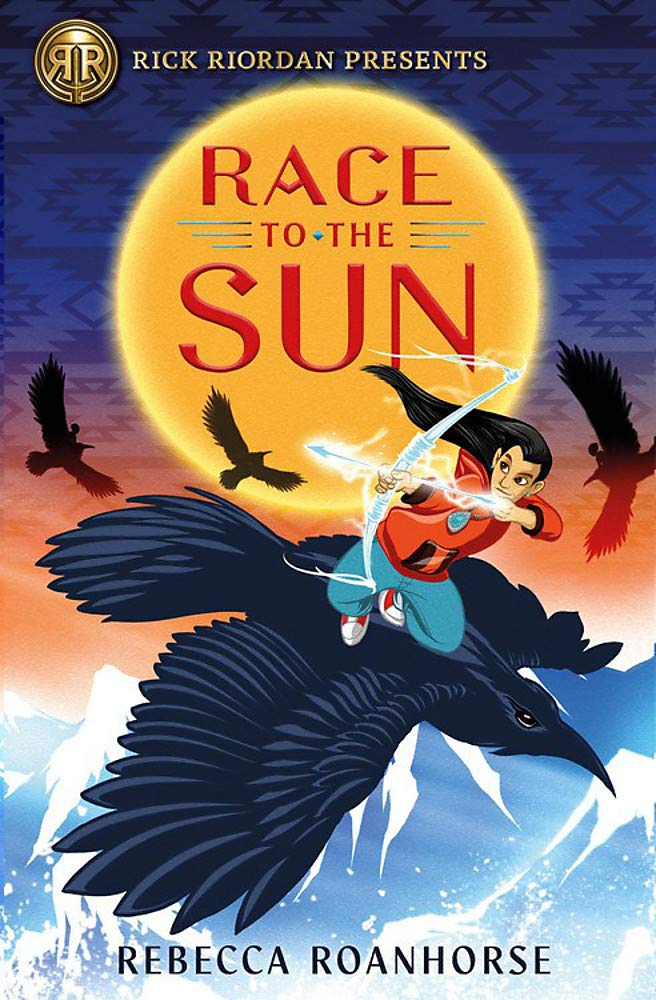 Nizhoni has moved schools, been ‘abandoned’ by her mother, and her father is less accepting of the family’s traditional Navajo heritage. Roanhorse has started the story off with a bang as we stand in Nizhoni’s shoes at the end of a very important basketball game where if she makes the last shot, it will win the game and bring her school fame, which is what Nizhoni wants. Instead, the worst happens, and rather than being glorified for scoring the game-winning basket, she is laughed at for missing the ball.

Being a child with a missing parent makes Nizhoni’s angst and doubt so much more gut-wrenching to read. Nizhoni has lived her life feeling like she wasn’t good enough because she blamed herself for her mother leaving. She carries this burden with her into her teenage years.

To make matters even worse, Nizhoni can see monsters. Real live monsters in the flesh disguised as humans. We see how Nizhoni shares her worries and fears about the monsters in the most typical teenage way with her best friend Davery. He listens to what Nizhoni says, believes her, and helps.

Her dad wasn’t listening to her, so the best friend is the next most logical choice to tell. Once the secret is shared the action picks up and the story catapults readers in the mythology of the Navajo people. It’s time when family history and cultural heritage merge together to create a powerful story about redemption and family lineage. We also learn the truth about Nizhoni Begay.

She is a monster slayer, and it is her time to fight.

Nizhoni’s father has been kidnapped by a mysterious businessman/monster named Mr. Charles. Nizhoni barely survives her first encounter with Mr. Charles and with Davery, and her little brother Mac, who has the ability to manipulate water, they set out to find mythological beings like Spider Woman, walk the path of the Rainbow Road, and hopefully gain special weapons made by the Sun. Nizhoni, Davery, and Mac have a long journey and a short time to save her dad.

Roanhorse’s version of the odyssey on the Rainbow Road forces the three to confront challenges that they must pass. For Nizhoni and Davery, the prom of thorns trial takes them to a school prom, which might be the most difficult challenge anyone could face. To the teenagers that don’t fit in, the prom trial plays on the one thing that Nizhoni has talked about since the beginning of the book; she just wants to be liked. So would Davery.

There is so much happening in the prom of thorns challenge, and while it is not dangerous it emphasizes the issues that many kids who feel like outsiders encounter. Nizhoni and Davery walk into a school gym where everyone is nicely dressed, their favorite music is being played and people welcome them. No one is standing at the back, or playing pranks, and not one fight occurs. The crowd knows their names and engages with them. They convince Nizhoni and Davery to dance, and in a short few pages Rebecca Roanhorse captures the angst of what many teens experience. Davery and Nizhoni feel welcomed, like they belong.

Part of the joy that I get from reading these middle school mythology books is that by the time I reach the last page I am thoroughly entertained, informed, and educated. Rebecca Roanhorse has crafted a neatly honed perfectly structured narrative at 298 pages.

Race to the Sun has plenty of room to expand and grow into a whole series of books. There is something also comforting in seeing how Roanhorse has tied up all the loose ends in Race to the Sun. Should this be a one-off in the “Rick Riordan Presents” banner, then it is a one a kind jewel that continues to promote the message of the book imprint. Every mythology is unique and exciting, and we should all learn about the cultures and heritages of everyone.

If you are looking for a quick read that will keep you glued to the page from beginning to end, Race to the Sun is your book. Should you be the reader who wants to learn something new while being entertained and remembering some of those difficult moments of being a teenager, Race to the Sun is the book. Check out this 4 star book from Rebecca Roanhorse. Fans of all things Percy Jackson have a new avenue to explore and must-read Race to the Sun.