“Anytime that you are a pioneer or part of the beginning of something it is very exciting.”

Diary of a Future President

“Dear Diary…It feels amazing. Disney is such a big company. So it is cool I am able to join them on their new platform.” That could very well be the diary entry for Tess Romero the charming young actress of the new Disney+ series Diary of a Future President. Romero stars as 12-year-old Cuban-American Elena Canero-Reed who takes viewers on the ups and downs of those awkward days of middle school and the formative years in the Miami suburbs that ultimately set Elena on the path to becoming the president of the United States.

Veteran actress Selenis Leyva stars as Gabi, Elena's mom in an acting departure from her breakout role as Gloria Mendoza in Netflix's Orange is the New Black. Leyva says her new series is a “celebration, a coming of age story of this Cuban-American girl and it really, I feel, is going to motivate a lot of young people to feel powerful, to really kinda go for it and to think and feel anything is possible.”

The young actress is quick to add that she hopes the show speaks to viewers who have big dreams and want to be a leader. “You can lead, you can do whatever you set your mind to, you can follow your dreams,” Romero says. “Whatever you want to do, you can do that,” observing that is what her series is all about.

Elena's life is something that youngsters and their parents can relate to regardless of how old or where they live. Romero says her character is in middle school, “she is losing friends, she is trying to figure her way in the world, what the purpose of her life is.” The actress shares that viewers will get to see Elena develop as a middle school student and experience all of the challenges she has to overcome.

Leyva agrees that the series is not just a kids show adding, “it is something that mothers and fathers can enjoy and watch and sit with their children and have an honest conversation.“ 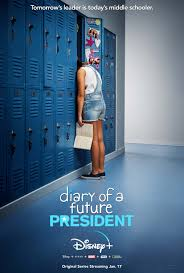 One of the plot lines in season one finds Elena's mom, a widow, dating again and Romero says “that is scary for the whole family, which is new territory.” Leyva says her character “suddenly finds herself back in the dating world and what does that mean to her family and what does that mean to the security of her family.” The actress says the audience will see Gabi struggle with those adult issues throughout the season in an honest but humorous way.

“This is exciting to show people that times are changing and the series in particular is showing this family in such a new light, a positive light that we have not seen before,” Leyva reflects.

The acting veteran adds that she is excited “for little girls to look at Tess and her journeys and her role in the show as Elena and how this little girl is unapologetic about her strengths and her voice.” Despite her extensive acting resume, Leyva says she “is in awe of Tess and the actors on the series.”

With so much going on in her professional life has Tess managed to keep her own diary? “Friends have given me diaries but it is very difficult to keep one. You have to set aside time, write down all of your feelings and then do that everyday. I couldn't. I tried but it is so hard and also I have siblings so they could always get into that.” Her Disney+ mother on the other hand has kept many diaries over the years. “I have a box full of diaries starting from nine-years-old and I have a diary until this day.” Leyva adds “maybe someday I will get it all together and have a nice interesting memoir.”

The series is inspired by creator and executive producer Illana Pena's childhood and is produced by Golden Globe winner Gina Rodriguez, who directs the first episode and guest stars as the grown-up Elena who is now the Commander-in-Chief. Romero gushes over her opportunity to work with Rodriguez on the series. “She taught me so much, she is so full of knowledge of the industry and life,” the young actress notes. Romero, whose credits include Alternatino and Blind Spot, says working with Rodriguez has inspired her to look at other show business opportunities that may present themselves to her in the future. Diary of a Future President is now streaming on Disney+.