The complexity of marriage and parent-child relationships are comically explored in Downhill, a Searchlight Pictures film coming to theaters on February 14th. Premiering as part of the Sundance Film Festival, Downhill is an English remake of an internationally produced film called Force Majeure (it’s on Hulu) that was critically acclaimed and took home the Jury Prize at the 2014 Cannes Film Festival. While Downhill’s critical consensus is not putting this adaptation on a path to a full trophy case, I found it to be a funny and touching film about parental and spousal responsibilities set against a family vacation. And I do believe there’s an award-worthy performance to be found, as well.

Billie (Julia Louis-Dreyfus – a bug’s life, Geppetto, Onward) and Pete (Will Ferrell – Melinda and Melinda) arrive for a much-needed vacation at a high-end skiing resort in the Swiss Alps with their two sons. The marriage already seems tense, with Pete having spent the past eight months grieving over the loss of his father and Billie putting her own needs aside to support him. But the threads begin to unravel during a small avalanche where Peter grabs his phone and runs, leaving Billie and the boys in the path of potential disaster. 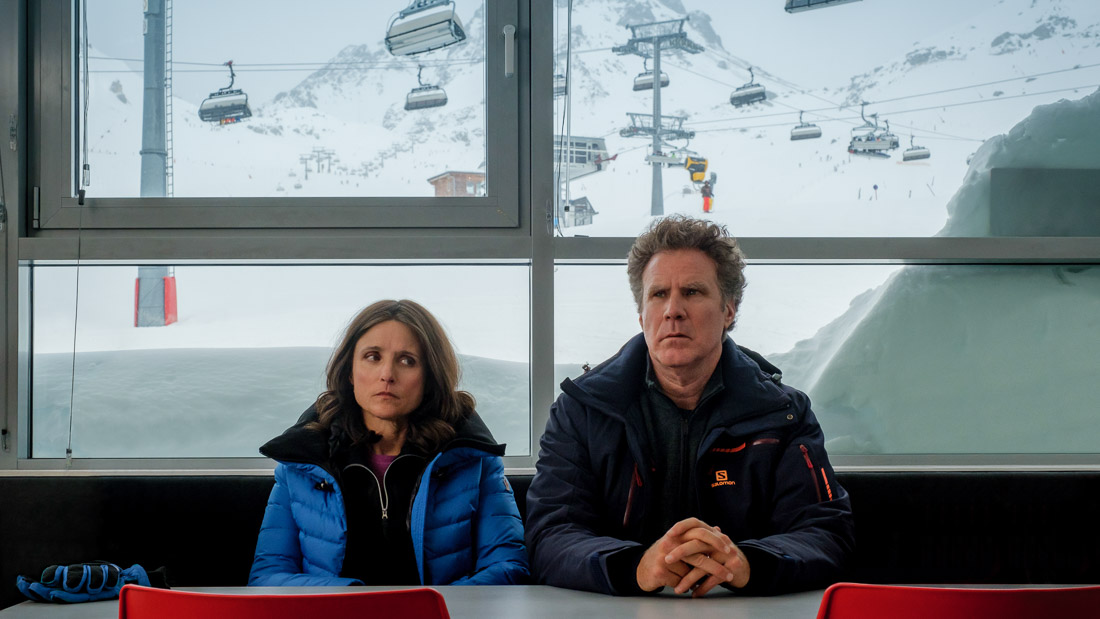 That may not sound like a comedy, but Downhill manages to make tense moments shockingly funny and surrounds the cast with some highly comical characters. Among them is Charlotte, a manager at the resort who forces herself on Billie and Pete as an instant friend and refers to the party vibe of the resort as “Ibiza in the Alps.” She is played by Miranda Otto (The Thin Red Line) in an unforgettable scene stealing performance.

Will Ferrell offers a more toned down performance in this, a different kind of comedy than his typical over-the-top brand. He’s more sympathetic and pitiful here than I’ve seen him before, but it’s hard to distance his natural mannerisms from some of the characters he injected them into like Mugatu, Ron Burgundy, and Buddy the Elf. He’s able to pull off sympathy and humor well, which are the character’s main traits, but when a scene calls for more emotional gravitas it ultimately falls a little flat. 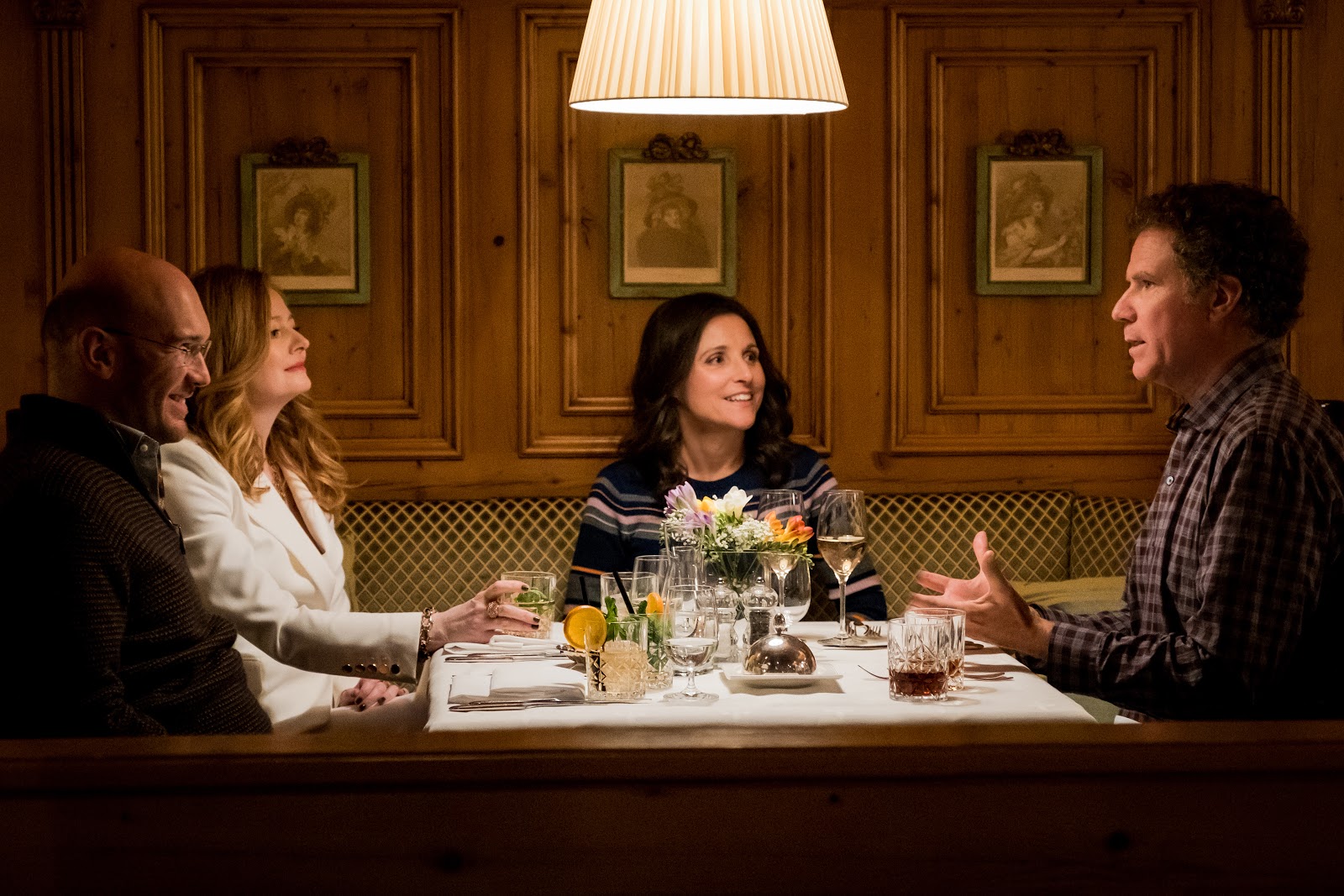 Julia Louis-Dreyfus absolutely shines in this film and deserves consideration for Lead Actress prizes. Pay close attention to her eyes as you watch the film. She lets you know exactly what Billie is thinking and feeling in every scene. She’s a fairly well controlled individual with a few moments of outburst and every character choice is perfectly executed along the way to create something truly beautiful. The entire film really rests on her shoulders and she carries it so well.

Veep co-star Zach Woods plays a colleague of Pete’s who is on a more exciting European adventure with his girlfriend. Pete is often distracted by Zach’s Instagram posts and eventually gets him to come to the same resort, resulting in some of the film’s most hilarious moments for he and Ferrell when the couple decides to spend some time apart at the resort. These separated sequences are hilarious on Billie’s side as well, with more delightful moments from the eccentric hostess Charlotte. 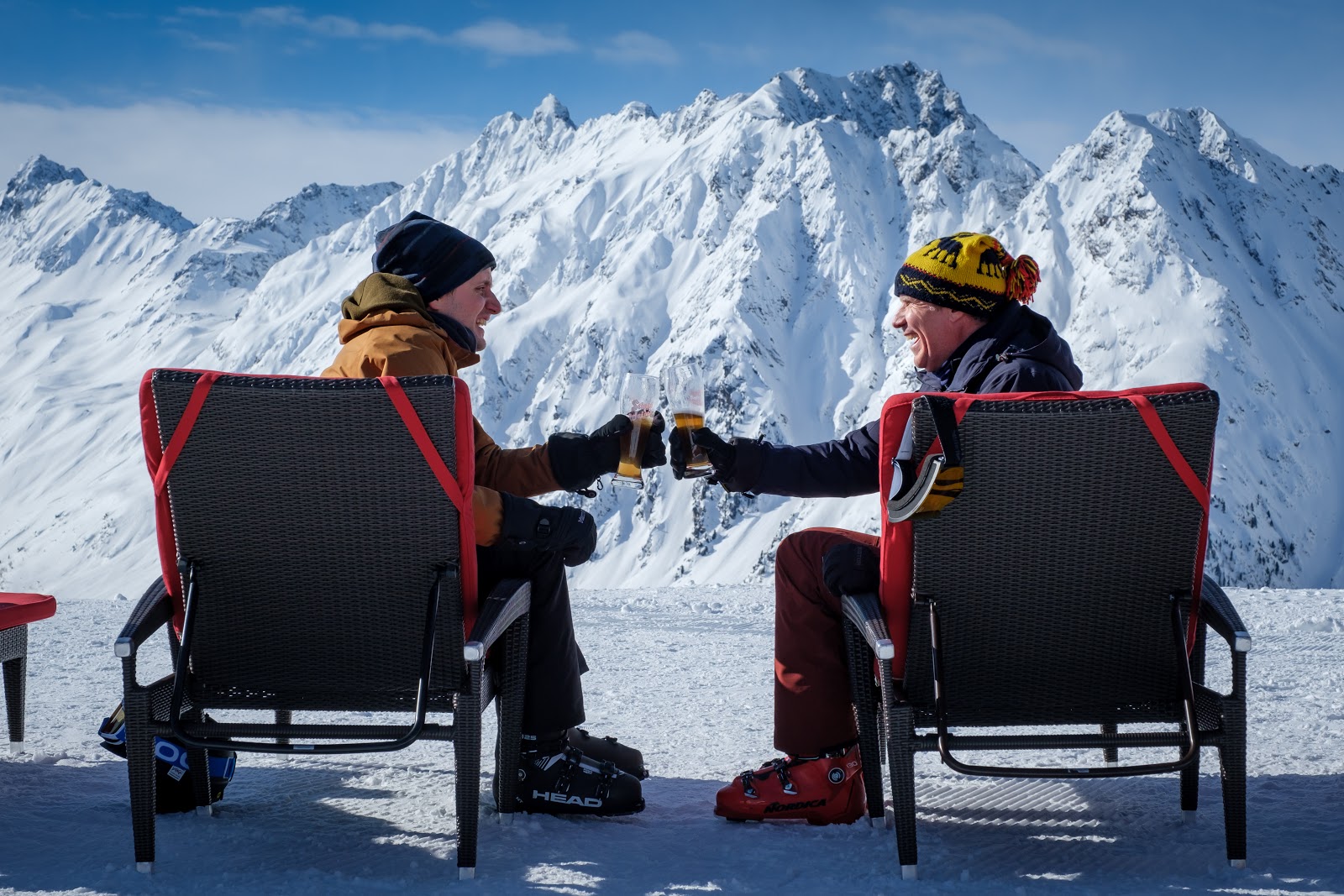 Downhill mixes elements of National Lampoon’s Vacation and The Out of Towners in a new comedy about marriage and family. It’s not the most original film you’ve seen this year and it doesn’t exactly break the genre, but it offers a sincere film that isn’t afraid to sugarcoat the potential outcome for this family. It may not be the most romantic of Valentine’s Day weekend films, but is one that married couples will likely identify with and can perhaps inspire more open and honest communication.

I give Downhill 5 out of 5 Disney Skyliner gondolas without character wraps.