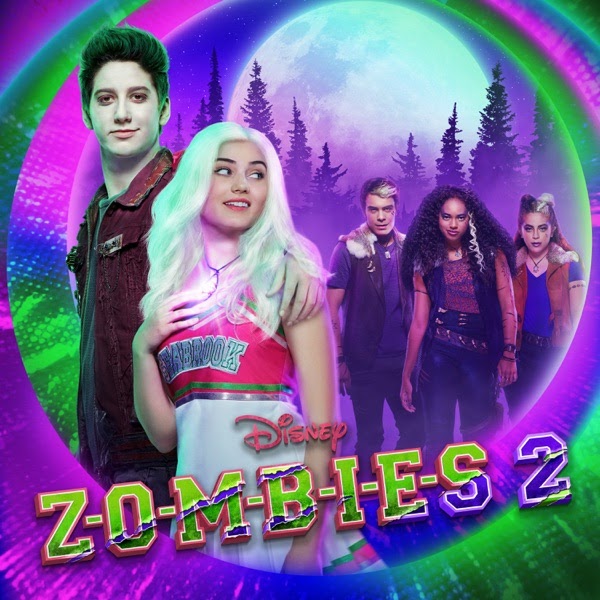 Disney Channel’s Zombies was a huge hit when it premiered in 2018, introducing great songs like “Someday,” “Fired Up,” and “BAMM.” With the premiere of Zombies 2 comes ten new songs sung by returning cast members Megan Donnelly and Milo Manheim as well as new “pack members” Chandler Kinny, Pearce Joza, and Baby Ariel. Get your coolest dance shoes out, because the Zombies 2 soundtrack is full of dance-heavy bops!

The album opens with “We Got This,” which uses a marching band drum beat to catch you up on everything that happened between the two films. It has a similar vibe to “My Year” from the first film, but is an all around better song and one of the standouts on the soundtrack.

Next up is “We Own the Night” from the wolf pack trio. The film may premiere on Valentine’s Day, but this is a new Halloween hit that should come right after China Ann McClain’s “Calling All the Monsters” on your spookiest playlist.

“Like the Zombies Do” is a Bruno Mars-style track full of hand-claps that allows Milo to show his vocal range more than the first film did. It’s one of the most fun songs on the track and sure to be the inspiration for many a TikTok video.

There’s a duet ballad for Meg Donnelly and Milo Manheim called “Gotta Find Where I Belong” that ironically sounds a little bit like “Gotta Go My Own Way” from High School Musical in more of a Selena Gomez style. It’s okay, but doesn’t hold a candle to “Someday” from the first film.

“Call to the Wild” is not a song from the 20th Century Studios dog film but a salsa-fusion song where the wolf boys try to get Addison on their side. It sounds like a Becky G./Pitbull collaboration at times and it’s a lot of fun.

If you love Lin Manuel Miranda’s Hamilton, then “I’m Winning is the track for you. It’s a hip-hop rap between two opposing teams that feels inspired by “My Shot.”

“Flesh & Bone” is a unity song with a whistled melody. It’s one of the few songs on the soundtrack that doesn’t feel like it lifts the style of another artist or production to plant it in the Zombies universe. That being said, there are a few moments that verge a little on the Taylor Swift side.

“One For All” is like a nightclub dubstep/samba fusion climactic track. It feels edgy in comparison to the rest of the album and the lyrics make it sound like the goal has been achieved, but it’s not reflected in the actual song itself.

“Someday (Reprise)” is the only song from the first film that has a moment on the soundtrack with Meg Donelly and Milo Manheim adding new emotion to the fan favorite song.

The album closes with a pop song from Baby Ariel called “The New Kid in Town,” a love song fitting for Valentine’s Day. It’s about a girl with a crush on the new boy at school.

My top three tracks from the Zombies 2 soundtrack are “We Got This,” “Call to the Wild,” and “We Own the Night” in that order. The album offers more fun dance tracks perfect for your next workout or party. Wherever you take it, you’re sure to have a wild time.