Enesco brings you some of the most collectable Disney figures on earth and this year, they had a lot to showcase at Toy Fair. Their brands include Disney Showcase, Miss Mindy, Jim Shore, Britto, Couture de Force, and more. Whether you’re giving a special gift or adding magic to your home, there are some incredible items coming your way.

The Nightmare Before Christmas

There’s something new from Halloweentown with a collection of figures including Sally in a ball gown, Jack Skelligton in an evening cloak, Oogey Boogey in a vest and sport coat, and Lock, Shock, and Barrel in their finest costumes. Even more impressive is a figure of Jack Skellington and Zero where Jack’s ghost dog magnetically floats and glows. This was one of the most eye-popping pieces in all of Toy Fair. Ms. Mindy’s line of vinyl figures include Jessica Rabbit with a mini Roger, Alice, Jack Skellington, Sally, Cheshire Cat, Mickey Mouse, Minnie Mouse, Ariel, and Tinker Bell. New this year is a miniature line of Disney Princesses and Disney Villains that make these figures even easier to collect. Holiday variations of Jack and Sally are also coming later this year. In celebration of the 70th Anniversary of Cinderella, a figure of the title character is coming soon with an opening in the dress that reveals a three dimensional pumpkin coach. Her mice friends, Jaq and Gus, will be available in a two-pack. For the 10th Anniversary of Tangled, a similar collectible features Rapunzel with the floating lanterns scene inside her dress. She pairs well with Pascal, who has changed colors to look like a flower. Enesco’s line of light-up holiday houses adds Halloweentown to the mix this fall with the courthouse from The Nightmare Before Christmas and new character figures, like the puking town fountain and the vampire trio making a fanged duck toy. The newest Couture de Force figures were on display, including Belle, Tiana, Ariel, and Cinderella. Anna and Elsa in their Frozen 2 costumes recently joined the line, along with Jessica Rabbit, and Will Smith as the Genie. Upcoming figures include Mickey Mouse’s Couture de Force debut as Sorcerer Mickey, Rapunzel, Snow White, Mulan, and the first couple paired together, Belle and Beast. One of the highlights of the Grand Jester Studios table is a Maleficent figure mid-spell, with glowing green flames around her. This figure is limited to 2,500 pieces and is expected to sell out quickly. New from Jim Shore is a fall release of Ichabod Crane running from the Headless Horseman from The Adventures of Ichabod and Mr. Toad. Cinderella is on her way to the ball in her pumpkin coach in this charming carved figure. Thomas O’Malley and Duchess and her kittens pose for a family photo in a rare figure from The Aristocats. Other similarly posed scenes are inspired by Pocahontas and Mulan. 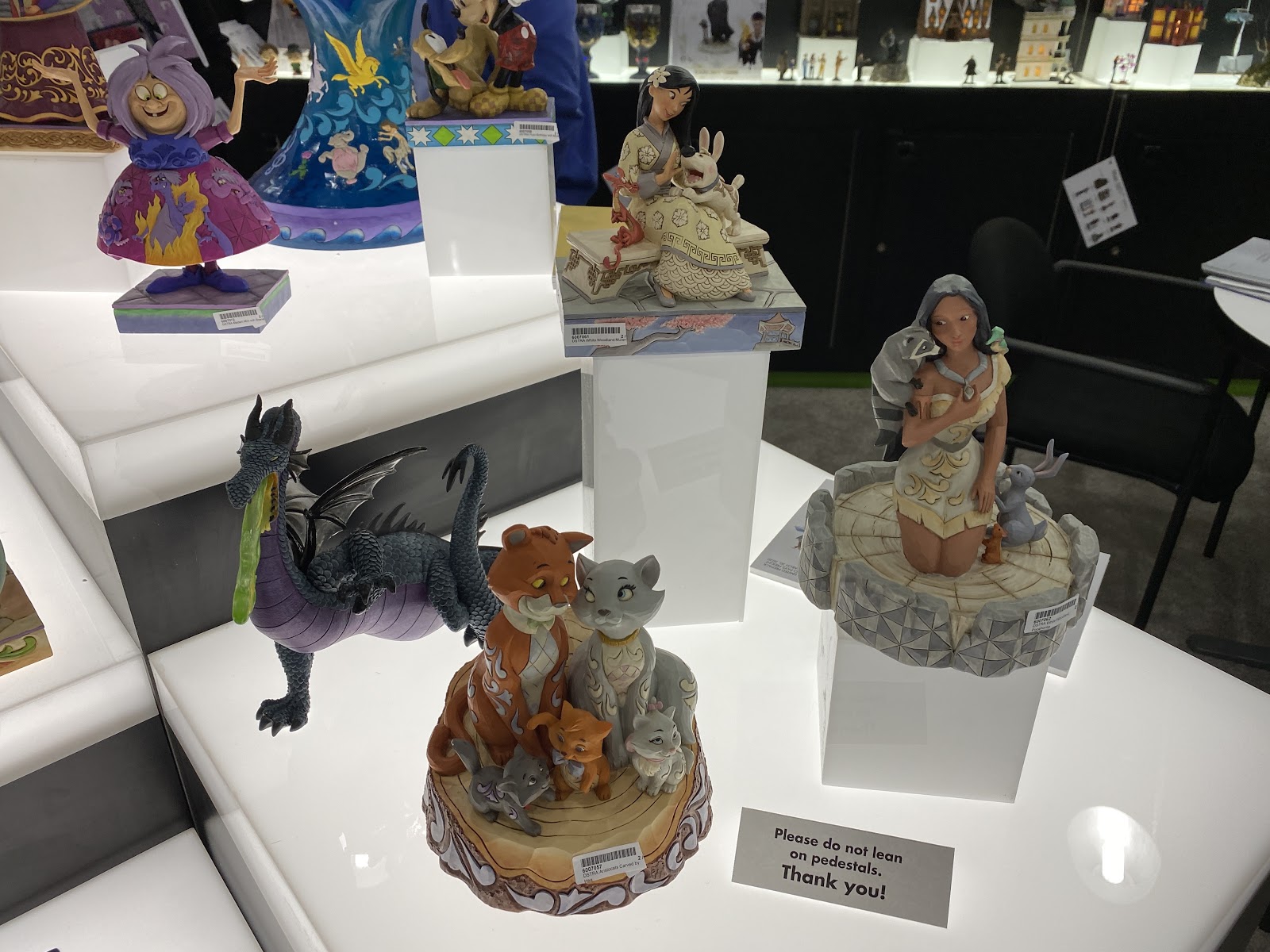 Mad Madam Mim from The Sword in the Stone has been carved by Jim Shore and her skirt features all of the animals she transforms into, including a dragon. For Fantasia’s 80th anniversary, Jim Shore has created a tall figure with Sorcerer Mickey perched on his rock with translucent water splashing around it, with other characters from the musical package feature around the base. 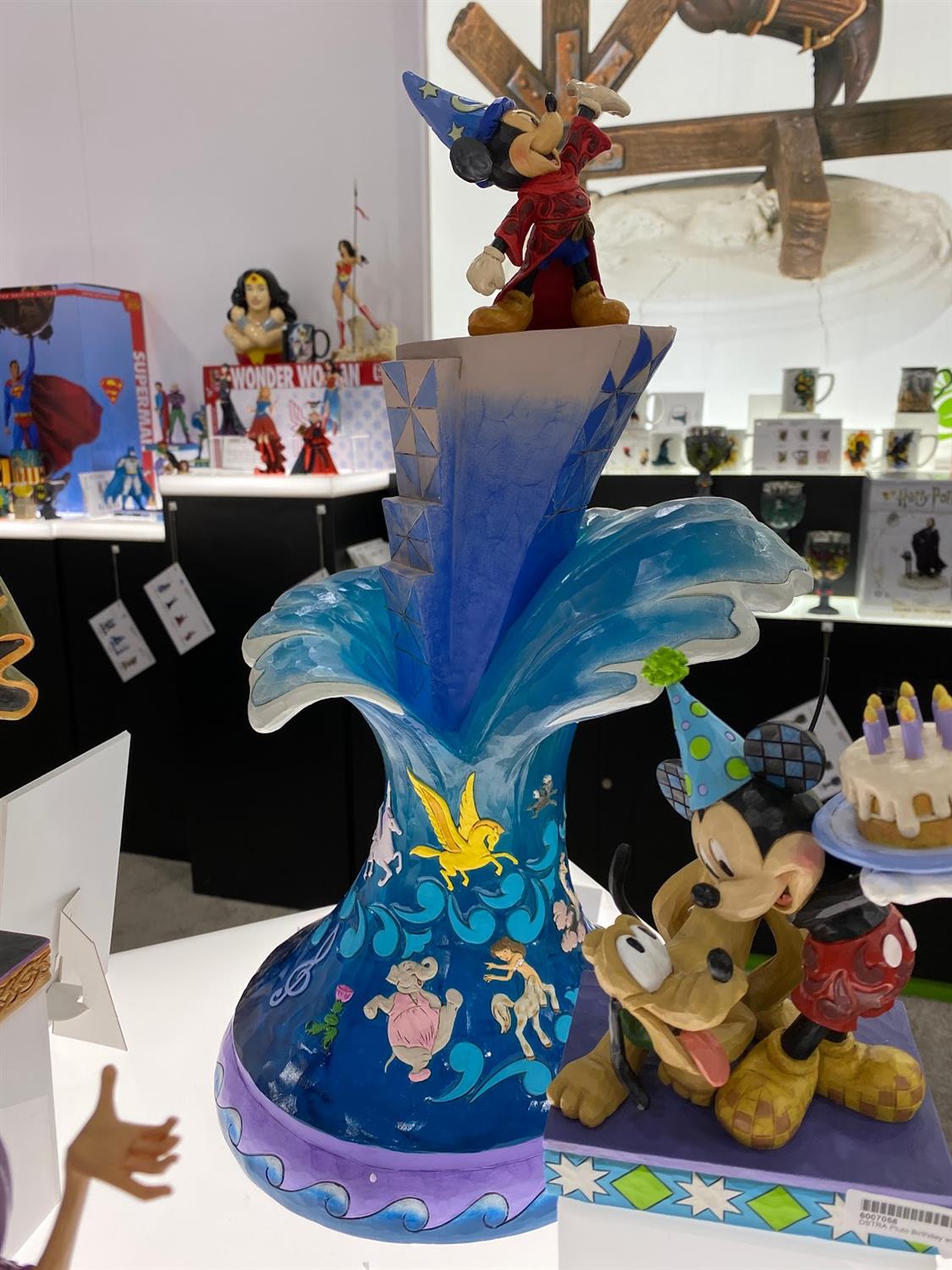 New from Britto is an Angel figure to go along with the already available Stitch. A dwarf collection is also coming, perfectly to scale with a Snow White figure that’s sold separately. In celebration of the 80th anniversary of Fantasia, a special Sorcerer Mickey is also coming in bright Britto colors. And who can resist the charm of the upcoming Dumbo figure with a glittery inner ear? 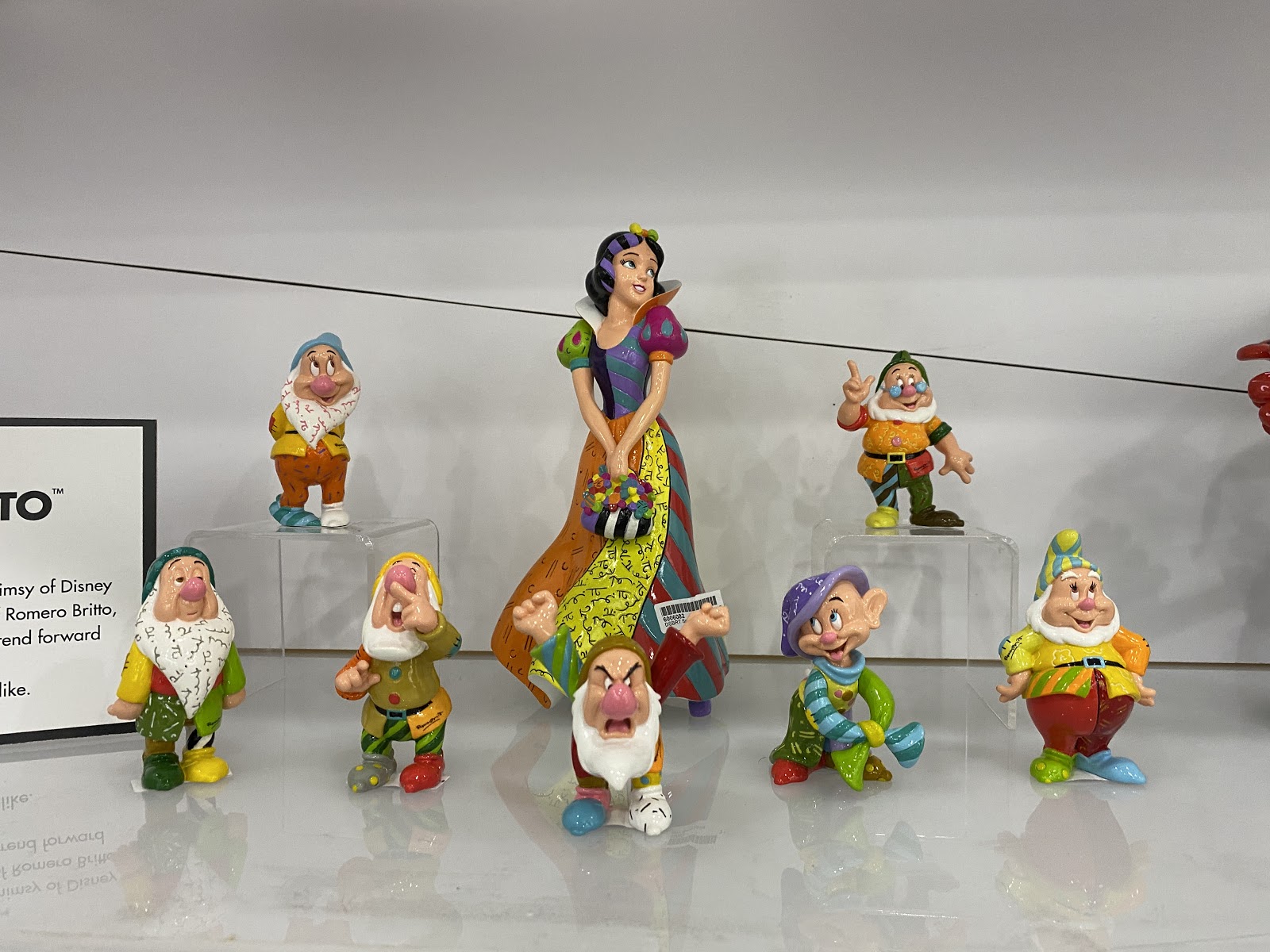 Whether you’re commemorating a special occasion, giving the perfect gift, or adding a touch of magic and whimsy to your home, the perfect products are delivered by Enesco. There were so many highlights from this year’s Toy Fair visit and I have a hard time picking a favorite, but I think it’s a tie between the Jim Shore Fantasia figure and the floating Zero with Jack Skellington from The Nightmare Before Christmas through Disney Showcase. Be sure to check out the rest of our Toy Fair coverage to make sure you don’t miss any of this year’s big Disney reveals.