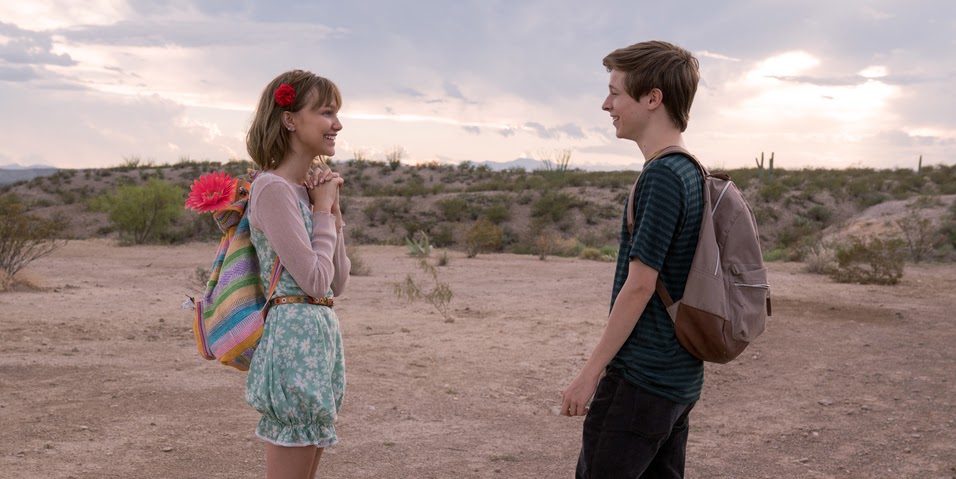 When audiences watch Stargirl, the new Disney+ original film that’s now streaming, they’ll take away messages of being a force for change in the world around them. But there’s also a subplot about conformity and bullying and the different ways it can manifest, which is an important discussion for kids and teens in the digital age. In November of 2018, I got to visit the set of Stargirl to interview the young actors about their own experiences with trying to fit in at school.

“In the beginning [of the film], I’m too scared of having anything different about me,” Graham Verchere shared about his character Leo, who is the film’s main character and narrator. “And then Stargirl comes and she’s so different and she doesn’t care. He can see how free she is and how big of an effect she has and it does start to change him. But eventually, he realizes once things start to go downhill that he can either choose to be himself or to fit in and that’s a really hard choice. I don’t think he makes the right choice because he asks Stargirl to change to fit in with him and I’m really glad she doesn’t because I think it teaches kids that if you want to be happy then you should.”

Even though Stargirl is confident in herself and who she is, even she falls victim to the same peer pressures as Leo. “It would be so easy to say she’s so true to herself or anything like that,” Grace shared on set. “But personally, I think her best quality is her awareness and just how incredibly aware and in the moment she is about everything in her life. And I think what i love about this movie is she’s so sure of herself but then she falls in love and she changes herself for that and I think it’s really cool how it shows what people sacrifice for people they care about. So I definitely hope people take away from it just self care and your happiness is most important.”

Disney Channel veteran Karan Brar plays Kevin, Leo’s best friend who hosts a school interview show called ‘Hot Seat’ where kids have to answer any question they’re asked while being broadcast to the entire school. “We explore more of it,” Karan shared about one of the film’s differences from the book. “I think what’s really cool is that Graham and I did a scene and it’s my favorite scene to have acted in thus far because it’s the thread that holds them together. The ‘Hot Seat’ is their sports to them, it’s their Fantasy Football, it’s their thing. And that really is what their friendship is really founded on a little bit. We kind of see where everyone’s motivations lie. Because at the end of the day, Kevin, as supportive as he wants to be of Leo and Stargirl’s relationship, he also just wants Stargirl to be on the show for his own popularity, to get to whatever he wants to get to. And so it’s really interesting to see how Leo’s motives change.”

“It’s funny because as an actor you’re supposed to justify everything in a very positive light,” Karan added about his character’s exploitative streak. “You’re supposed to be like ‘I’m a serial killer but I’m doing it for a good reason.’ And I think the cool thing about Kevin is it’s been a really interesting character to play because ‘Hot Seat’ isn’t exactly the kindest show. You’re just ripping people to shreds a little bit about the gossip happening in school, but it’s really interesting to play a selfish character. It’s kind of fun as an actor just to play talk show, like we were doing some of the ‘Hot Seat’ scenes earlier and improvising, which was really cool. It was nice just to be with the whole cast in a small room and hang out and do scenes. And also I think we get to see a lot more of Leo and Kevin’s dynamic very clearly laid out in that show.”

Artemis plays Mallory, one of the cheerleaders in the film who became a bully in a less obvious way. “Even though Mallory isn’t as direct with her bullying, it is still a form of bullying because once Stargirl does something she doesn’t agree with she completely shuns her. All the other cheerleaders shun her probably because Mallory shunned her as well, so it’s another kind of bullying that probably isn’t really thought of as strongly as the rest that can really affect someone as well. So I’m really glad to be a part of shedding light on that.”

The character who becomes the biggest opposition to Stargirl is Hillary, played by Shelby Simmons. “I really hope that once [people] see the film, they’re able to be more comfortable in their own skin. To see, look, Stargirl went through this horrible experience and yet she still loves herself. She’s still herself. She didn’t change herself to fit other people and stay that way. She still loved her. But I also want them to want to spread love and joy for people.”

“Now more than ever, it’s really important for people to know you need to be strong in who you are,” Anna Brown shared, who plays Leo’s friend Tess. “Don’t let societal pressure make you feel like you’re not good enough or you need to change any particular way you’re moving through this earth just because that’s not how everybody else does it. That’s the main message we get from the book and the movie. It’s super important because it’s so easy to get lost in the shuffle these days. Everyone has their own uniqueness to them, you just have to own it.”

Collin Beckford plays Benny, another one of Leo’s core friends, who opened up about the cyber bullying implications that follow Stargirl’s turn on ‘Hot Seat.’ “There are some points in the movie where they film things that she does and then it really affects her because it gets out there. Today’s age with social media is so important. It’s insane how any little thing you can do can be shown to millions of people and I really think this shows that one little video you do can really hurt someone. Or that one little post you make can change someone’s life. In today’s day and age it’s true, it can happen, and I think this film portrays it in a very realistic way.”

“I still go to school but it’s not a normal school at all,” Grace VanderWaal shared about her own school experience. “I went to public school, but public school sucks as you may know, so then I tried homeschooling but homeschooling sucks more, which no one would expect. I thought it was going to be so cool. It is not, it’s just a bunch of homework that you have to do every day. It wasn’t for me, but now I go to this super cool artsy small private school in upstate New York. But for my public school, I definitely see a lot of it in this movie and even some of the school shots that we did, like, even though it was for a movie, it was just so many kids and that was in a real big public school again.”

Both the book and movie use Leo’s porcupine ties as a symbol for his character’s progression throughout the story. “I think porcupine ties are the individuality that he crushed down. Because when he was a little kid, he wore it all the time. When he loses his dad, he doesn’t have anyone but he has the ties and then he loses that. And then after Stargirl comes into his life and flips everything upside down, he starts bringing it back a little bit.”

When asked what the meaning of the film is to him, Karan Brar had this to say. “As cheesy as it sounds, a reminder to be kind to one another. I think in this climate right now, with everything that’s going on from like politics just to society, with social media playing interesting roles in the high school experience, I think it just reminds us to be human beings and that it goes a long way to change ourselves as well as the environment of other people. Because you look at characters like Dori and Alan, who’ve never had friends before really, and they befriend Stargirl and you just see these special sparks. And you get to see what it’s like when this school turns from this kind of very segregated to something that’s so communal and about holding each other up. And I think to see that is very inspiring and it’s an old lesson that we need to remind our generation of. It’s really important.”