Camp Jupiter Classified: A Probatio’s Journal is the latest addition to the Rick Riordan Companion books series. This light-hearted and humorous look at the home of Roman demigod children will entertain fans of Rick Riordan’s mythological world from the first page to the last. Today’s demigod children of Roman deities are learning survival skills and building a life as a member of the 12th Legion in the foothills of Oakland and Berkeley California in the last vestige of Ancient Rome at Camp Jupiter. 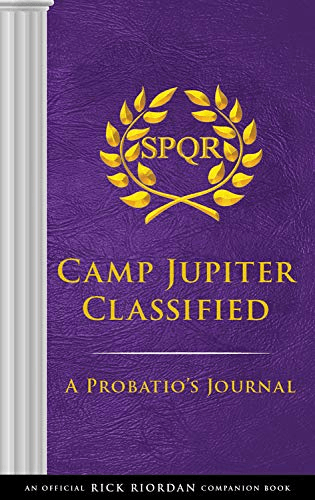 Camp Jupiter Classified: A Probatio’s Journal is the story of a young Roman demigod named Claudia, the great granddaughter of Mercury, and follows her journey as she arrives at camp and learns the ways of the Twelfth Legion. The story is set just after the defeat of Gaea in the ‘Heroes of Olympus’ series, and odd things are happening at the camp.

Told in diary format from Claudia’s point of view, we get a behind the scenes look from a demigod who comes to the world of epic battles and quests with fresh eyes, and her own story to tell. This child of a lesser known god in the Roman world, Claudia like any new member of the Twelfth Legion is not sure what to expect at her new home.

The camp itself is beautifully described through her first-hand account. She adapts to life at Camp Jupiter in typical fashion and struggles to meet friends, but ultimately does. The rules and expectations for life in the Twelfth Legion take some getting used to, and as Claudia takes us through her new world, we get to see snapshots of what it’s like to be an unknown demigod that shares the world with characters like Frank Zhang and Reyna Ramirez-Arellano .

Frank and Reyna are respected and revered by the members of the Twelfth Legion, and through our protagonist, we get to see how others view these important characters that readers have embraced for years. The book details Claudia’s discovery of a missing ancient Roman shield that if destroyed will result in the end of Camp Jupiter and the Roman gods. The camp is still recovering from the recent battle with Gaea, and no one else has noticed the missing shield.

There are bits of humor, and a fun spotlight on the lesser known characters that are in the background of Riordan’s books, but what makes Camp Jupiter Classified: A Probatio’s Journal so enjoyable to read is that it focuses entirely on Claudia’s experiences at Camp Jupiter. She is a breath of fresh air in an already well-established world.

Camp Jupiter Classified: A Probatio’s Journal is a wonderful read about what it’s like for a Roman demigod who must find her place in an unfamiliar world. Claudia’s arc is complete as the book ends. She learns to embrace her new life, finds a place in Camp Jupiter and learns the truth about her lineage. We may only get a short journey with Claudia, but she leaves an impression on the reader that won’t be forgotten. This newest offering in the Riordan world will help tide over fans who are eagerly waiting for the fall release of The Tower of Nero.