Leslie Iwerks needs no introduction, but here’s one anyway. Her grandfather, Ub Iwerks, was a technical wizard behind many of the Walt Disney Company’s earliest innovations and was the co-creator of Mickey Mouse. Her father, Don Iwerks, became a Disney executive after following in his father’s filmmaking footsteps and also helped develop the Circle-Vision 360 format for the Disney Parks. As a documentary filmmaker, Leslie Iwerks’ films include The Hand Behind the Mouse: The Ub Iwerks Story, The Pixar Story, and most recently, the Disney+ docuseries The Imagineering Story. Leslie Iwerks was recently a guest during the Walt Disney Family Museum’s guest speaker series, Happily Ever After Hours. Here are ten things we learned during her live Q&A. 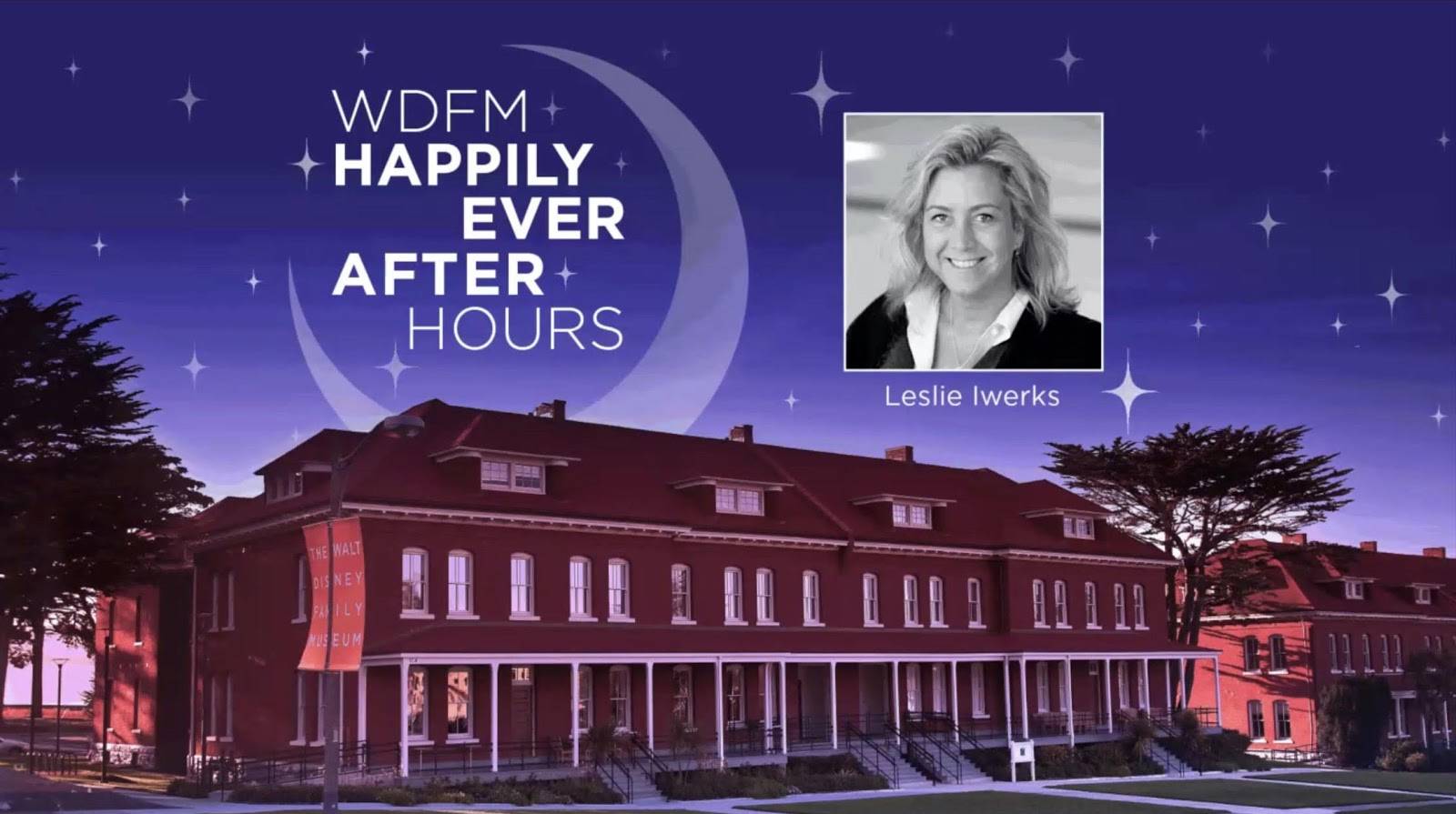 1. She has fond memories of visiting the Disney lot as a kid.

“I remember… my dad would take me every now and then to the Disney lot when he was working on the weekends,” Leslie Iwerks recalled, sharing that she would run around the backlot when it wasn’t in use. “That was really magic to a little kid. I remember The Shaggy D.A. was in production and Herbie was sitting on the backlot, a celebrity car.” Being exposed to movie making magic at such a young age, Leslie set her sights on going to film school at USC when she was a child.

2. Leslie thought she wanted to be an Art Director.

“I was always really into art and I had a window painting business in high school,” she explained. “I learned to paint characters on windows and it was a little silly, but it taught me to be an entrepreneur and to establish contracts and what my work was worth.” Because of that experience and her dreams of going to film school, she thought becoming an Art Director would be the perfect role for her. The first class she took when she went to USC was about art direction and she was surprised to find she didn’t like it. Her best advice for students in film school is to try and learn a little bit of each discipline to find what you really like. Surprisingly, she never took a class on documentary filmmaking.

3. She had animation dreams.

One of Leslie Iwerks’ first projects after finishing school was developing her own animated feature. “I just studied animated films. It never got made, maybe someday, but I would study animated films and I would write scene-by-scene within that structure.” Her process is to start with the structure of the storytelling format and try to work within it. “Once you understand the structure to these things, then it all falls into place. And you’re always learning new things.”

4.  Wishes she could interview her grandfather, Ub Iwerks.

One of the questions Leslie was asked was about her dream interview subject, living or dead. Not surprisingly, her answer was her grandfather, Ub Iwerks. “I’d ask him a lot of questions that I can’t get out of my dad… It’s interesting because when I screened The Hand Behind the Mouse at Pixar, John [Lasseter] and Ed [Catmull] were in the audience and somebody asked if you did anything different what would it be and I said it would’ve been to actually be a fly on the wall and film what it was like in the room when [Ub] and Walt created Mickey Mouse.”

5. The Imagineering Story was meant to be a film.

“It was commissioned as a 90-minute film, really at the request of Marty Sklar,” Leslie explained about how the project came to be. She was at Walt Disney Imagineering to introduce a screening of her film, The Pixar Story, when Marty Sklar approached her and asked when she was going to do the same thing for WDI. “Long story short, it was commissioned as a 90-minute film and then it became a five-year project to document all around the world, all of the parks… The last year or so was editing and by five years in we had a 6-hour cut and… my two awesome editors, we basically said let’s just go long.” They had captured so much footage and had access to unseen archival films from the Imagineering Archives, so it was hard to narrow it down into something more compressed.

6. How The Imagineering Story became a series.

“At that point, I was worried about cutting it down to 90,” Leslie explained about the decision to ask Disney if the film could become a series. “I had gotten myself into a tough pickle… We could’ve given everybody 90-minutes, but thanks to Disney+, we were able to give Disney fans what they really wanted.” Still, the committee had to weigh in on the format change, a decision that went all the way to the top with Bob Iger weighing in. “Bob Weiss really believed that this was a good way to share it.”

7. Making the series was like a return to her childhood.

“We had so much fun. Who gets paid to ride rides at Disneyland and hold a camera and get POV shots?” Leslie’s years on the project included five trips to Shanghai Disneyland, both before and after opening, and magic moments like going into the top of the Matterhorn with Disney Legend Bob Gurr. As a child, her dad would sometimes bring her to Disneyland and take her backstage, something she got to bring viewers along for on this project. “As much as I grew up with this, it’s all still super cool to me.. .It was a privilege and a responsibility to ride the line of the Imagineers trusting me… and also the fans who know this stuff so well.”

“We interviewed Susan Hoose, one of the mermaids who was in the lagoon. We flew her out, we interviewed her in front of the lagoon and she was so charming… She talked about how they had to swim in fifty degree water and their hair was turning green and they thought they would get sucked into the propeller on the submarine ride… We cut together a whole scene of her story and it was fantastic. We found footage of her getting suited up in her test, it was so ‘50’s, but we ended up not putting it in because it felt like it was going astray from the Imagineering story. It was more of a cast and operations, but I do hope we can include it in some future episodes if we do more.”

9. She has lots of ideas for other Disney documentaries.

“I love the disney films,” Leslie Iwerkes shared when asked about other subjects she’d like to make films about. “I love the story of technology within the Disney company, I love the story of animation, I love animatronics, I’d love to do a story on animatronics. What’s so cool about Disney and with Disney+ now is they have a backlog of content that’s not mined yet, it’s untapped. That’s what’s so exciting and going forward with the research that’s been done already, we know what we’d like to tap into.”

“I seek out things that have never been told,” Leslie Iwerkes shared about how she chooses her film subjects. “I try to look at things that have a lot of contrast to them, the unexpected stories that you would be surprised by… The most recent one, outside of The Imagineering Story, was a short I did called Selling Lies.” Leslie happened upon a WIRED Magazine story about the fake news cottage industry in Macedonia. “I was outraged and fascinated by it… We just went to Macedonia within four weeks. We hired a producer, he did the groundwork for us… in ten days we got all these interviews and it was just so fun. That’s what I love about doing what I do in docs is you uncover things, you explore, it’s an adventure. You don’t know what you’re going to get… It’s a lot of work, it’s not always easy and it’s sometimes very stressful and dangerous.” Selling Lies is currently making the festival circuit, winning awards and