On June 26th, Disney+ invites subscribers inside the Walt Disney Animation Studios in Burbank, California, to be a fly on the wall for the last year of production on Frozen 2. Director Megan Harding was no stranger to this world before working on Into the Unknown: Making Frozen 2 because she produced The Story of Frozen: Making a Disney Animated Classic, an hour-long ABC special that aired in 2014. “It was a year after the film had come out, it had become this big success, it had won Oscars. That was the first time I met [Jennifer Lee] and Chris [Buck] and the Lopez’s.” Megan was joined by some of the creative team and vocal talent from the film during a recent virtual press conference.

Having worked closely with the creative collaborators who gave Frozen to the world, Megan regretted not being able to film the subjects while they were making the first film. “So when we heard that Frozen 2 was happening, we approached the animation studio and said would you be interested in allowing us to do this? But right from the very start, I think there was an incredible commitment that we all wanted to make something that was very different to a traditional behind-the-scenes special. It had to be true, it had to be honest, and it would tell you how animated movies are made. But more than that, it would really be about that creativity is really hard, these movies don’t just come out fully formed, they are hard won by many talented people and that meant that people had to be honest and brave and fearless when we came by, which everyone was.”

“In terms of letting people come in and film us, I loved, when I grew up, The Wonderful World of Disney whenever you get to go behind the scenes and see what they did,” Writer, Co-Director, and Chief Creative Officer of Walt Disney Animation Studios Jennifer Lee shared. “I’m so overwhelmed by what the studio does, what every artist, every technician does to get these films going. And it’s such a unique process, I think in my head, forgetting that we were going to end up on camera was people are going to get to see us do it and I loved those things as a kid.”

Producer Peter Del Vecho was also excited to open the door and allow audiences to see the process. “You get to see the animators, the lighters, the effects artists, all the departments, everything together that has to work like clockwork to make the film. And I think you don’t… most people don’t understand the number of people it takes and the hard work it takes to put these films together. So I think initially that is what we wanted to show the world, although I will say be careful what you wish for sometimes. Actually having them there for that year was a tough process.” 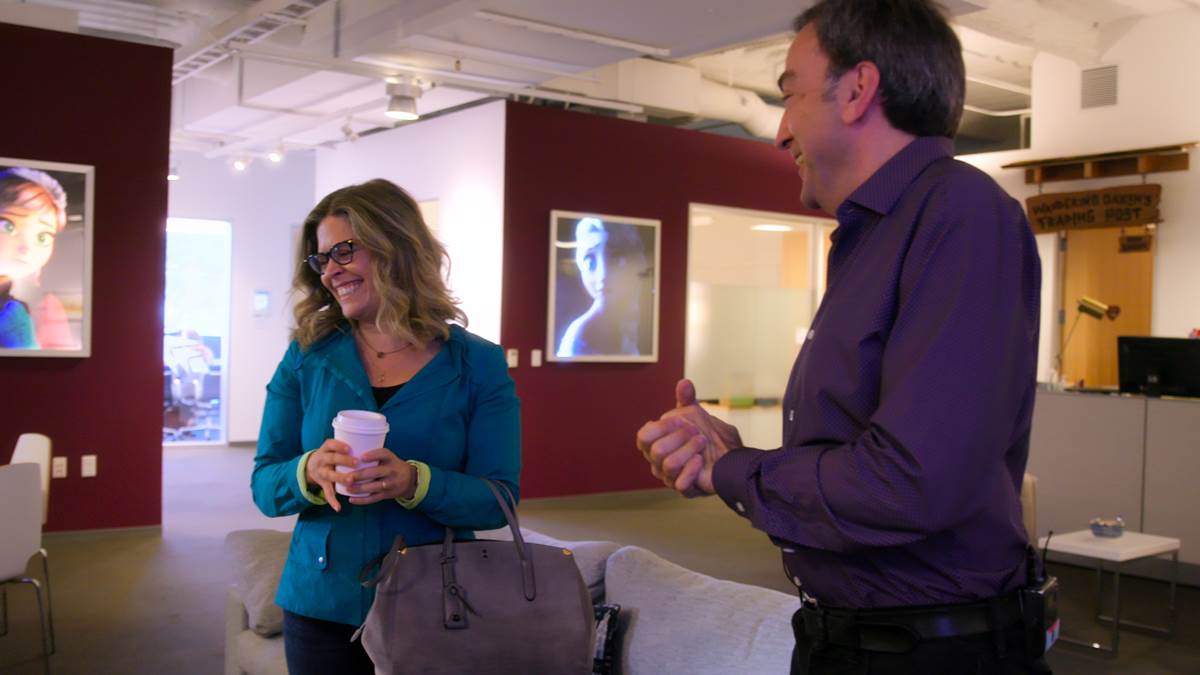 Idina Menzel speaks for Elsa in the film and also played a key role in helping to create the character. “What I loved watching this was how vulnerable Jen and Chris or Kristen and Bobby would make themselves in these creative processes,” the Broadway legend shared. “Just knowing as actors getting on a stage and what we do, it’s just so terrifying bringing ideas and to have to sit there and have all those people in a room criticizing and you guys, you’re so brave to do that and to throw your heart in it and to remain open to allow the work to keep progressing. I’m so glad you all have each other because you support each other in such a beautiful way that I don’t think is always the case in a lot of projects that I’ve been a part of. It’s such a good example for people to see this documentary and to see what it’s like to love the people you work with and how everyone can thrive in their ideas, whether they end up sticking or not. Everyone’s in a very safe place.”

For Josh Gad, the vocal mastermind behind Olaf, he found the presence of a documentary crew to be too much one day. “My Frozen process is so intimate and when I’m creating music or lines for Olaf, my brain just like, it needs to be this or I start to feel naked and I can’t experiment or play.” The actor had to redo one of his recording sessions on another day to be able to perform the way the film needed. “Put him in front of a microphone and he will create gold,” Songwriter Kristen Anderson-Lopez shared, coming to Josh Gad’s defense. “But that particular day reminded me of in the documentary Free Solo when the guy goes up to climb and he decides ‘I’m not going to do this today. If I do this today I’m going to die.’ And then he says to the guy on the radio ‘Having the cameras there is making me not able to do the thing you have the cameras there to film.’ And there were a few moments where that would happen where you would just realize whatever energy shift is happening is actually making it impossible to do the thing we’re all here to see.”

Another intimate process for cameras to record is songwriting, but Kristen and her husband Robert “Bobby” Lopez found a creative solution. “What we would do often is say ‘We’re so busy,’ we’d write the bulk of the song and then we would let them come while we were recording because a lot of creativity happens when we’re recording a demo,” she shared about the part of the process the audience will get to see. “We make a lot of the small tweaks, but it’s not like sitting in a room sitting with more camera people than the two of us going ‘Okay, what do we want to say here?’ Because that’s such a private kind of playdate kind of experience. You have to be free to jump up on the couch and be Anna and it would’ve felt really strange to have cameras there.” 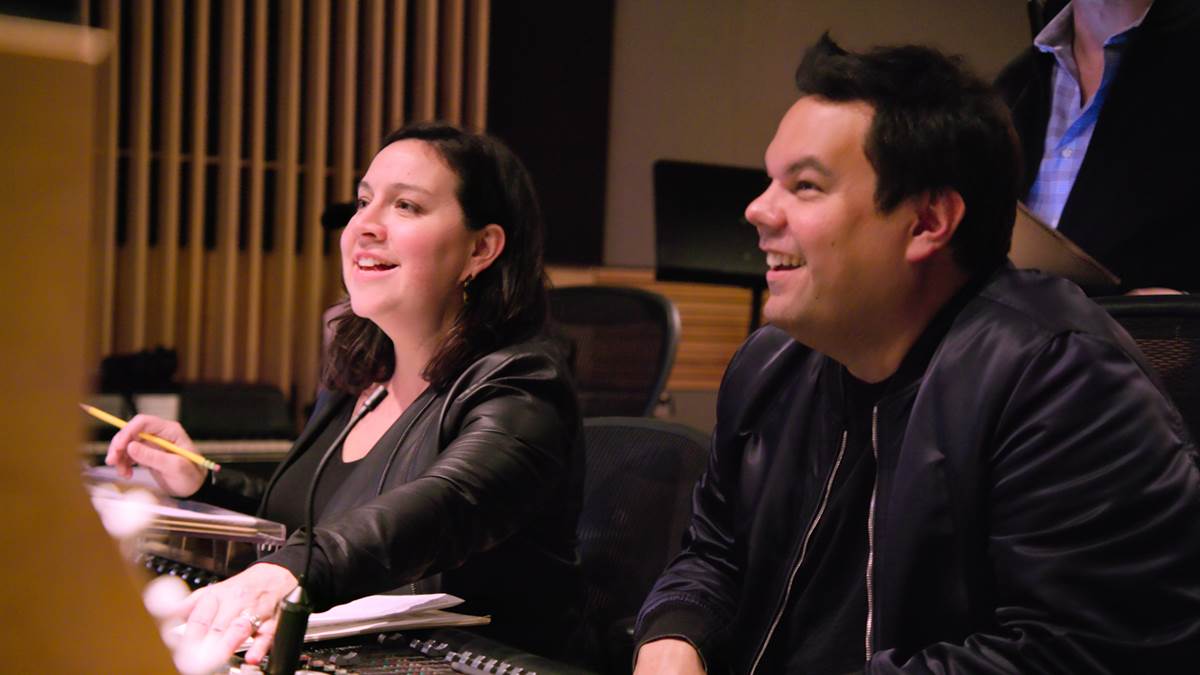 Because Kristen and Bobby do a lot of their work on the film remotely from their apartment in Brooklyn, the documentary crew had to come into their home to capture a lot of their work. Audiences with a keen eye may notice their trophy case, which includes several smartly dressed Oscars. “A friend of ours makes these clothes, she has other friends who have won Oscars, I think it was Joel Gray,” Robert shared about the festooned awards. “And she knitted Joel an Oscar sweater and then when we won, she knitted two little sweaters with a K and a B on them for them to wear. And then she made some more, she made some hats for them.” Kristen added more details about the headwear for each statue. “She made some pink pussycat hats for the Women’s March, the Frozen Oscars wear the pussycat hats and the Coco Oscars have tiny sombreros.”

Disney is all about storytelling and Into the Unknown: The Making of Frozen 2 has a narrative that carries it from start to finish. “We had months of footage and we had to really whittle it down into the 6 episodes so a lot of sacrifices had to be made there,” explained Director Megan Harding. “Luckily, the main series arc is ‘Show Yourself’ and the coming together of that, which is so great for a viewer to witness. Just that process that it goes through from the very start to the final orchestral session on that.”

The series makes it clear that an animated feature like Frozen 2 is the result of years of work from a large number of collaborators bringing something unique to the table. “It says animation on the side of the building, it really should say collaboration because it is this huge collaborative effort and that’s what makes it so special,” shared Supervising Animator Wayne Unten. “I feel like we see so much, but there’s so many moments where we’re having conversations. I would be having a conversation with an effects artist when Elsa’s running on the water and I’m in her office, Erin Ramons’ office, and I see math on glass… there’s so much genius from everyone that makes these things possible and it’s just such an honor just to be a small part of that and it’s fun.” 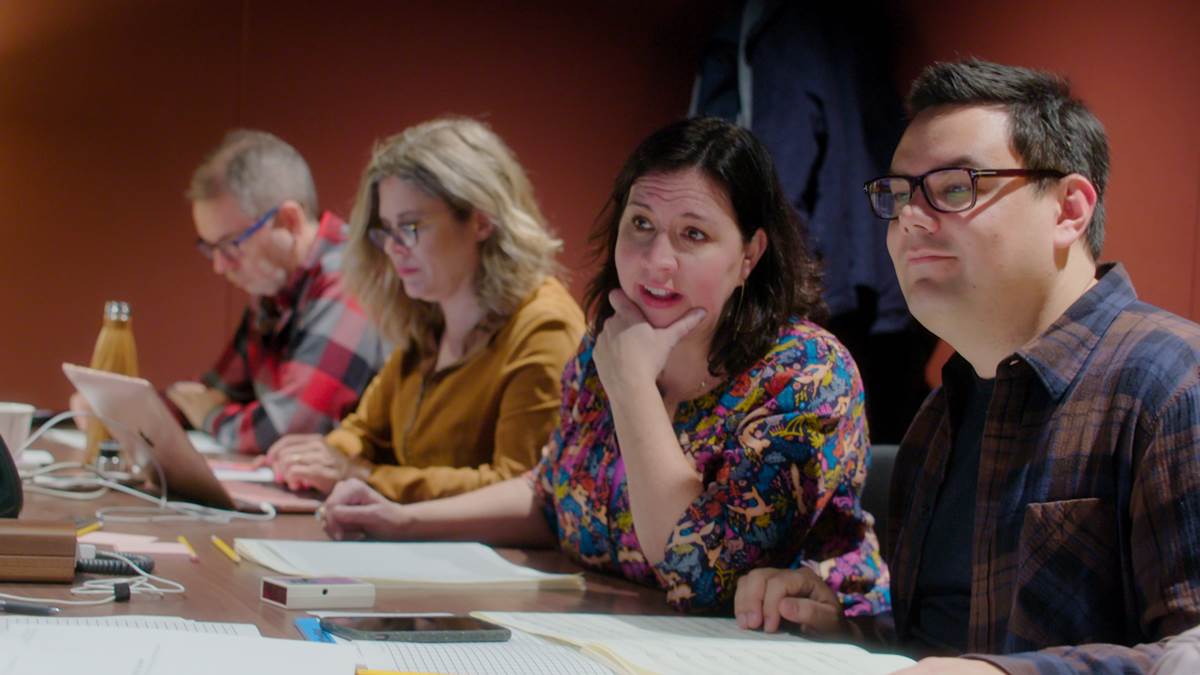 As audiences learn the challenges of bringing Frozen 2 to life, Josh Gad also hopes that recent events allow the film to play differently for viewers. “What’s been really fascinating about Frozen 2 for me is how it’s almost become something else as coronavirus sort of locked us in our homes, as we’re dealing with… so many different issues that are so difficult,” the voice of Olaf shared. “The themes of Frozen 2 have seemingly taken on a new life of their own. I find myself no longer singing ironically “This Will All Make Sense When I Am Older” or thinking about stepping into the unknown, or even the profoundness of something like “Show Yourself in this moment. It’s really taken on a different life. Even from the brilliant perception it had when it was first released.”

Fans can see what it took to bring Frozen 2 to life on Friday, June 26th, with the launch of all six episodes of Into the Unknown: Making Frozen 2 on Disney+.