Screenwriter and Playwright Linda Woolverton joined the Walt Disney Family Museum for their Happily Ever After Hours virtual speaker series on July 1st, sharing behind-the-scenes stories behind some of the biggest Disney films of the past three decades. Her writing credits include Beauty and the Beast (1991), The Lion King (1994), Alice in Wonderland (2010), and Maleficent, as well as Disney’s stage adaptations of Beauty and the Beast and Aida. Here are 10 things we learned from Linda Woolverton. 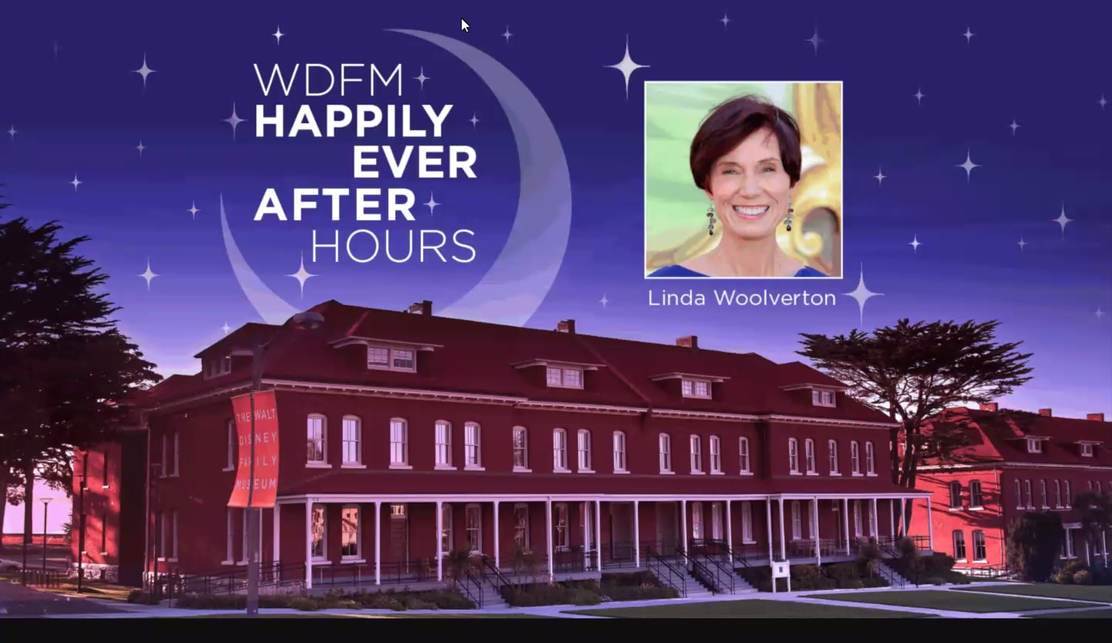 1. The book that turned her into a writer also got her in with Disney.

“The book Running Before the Wind was really my story written in fiction and I wrote it because I had to write it,” Linda Woolverton explained. “I had to write it to put away what happened and free me up. So I wrote this book and what happened for me was it enabled me to be a writer. But it got published, which was a shocker. I had an agent who was in animation and I saw a Disney movie that I didn’t think was great and I thought I could do better.” At the time, Linda was writing for Saturday Morning Cartoons and Disney wasn’t interested in TV writers for feature films. “I had this book that I had written so I took it over myself. I took it over myself, which wasn’t on the Disney lot. It was over in Glendale. There was no guard to stop me and I walked in the door and put it on the desk and I said maybe somebody here wants to read this. Because it was about something real in a fictionalized story, I think that’s what touched the executive who called me.” After that, Linda found herself with an offer to work on a little film called Beauty and the Beast.

“It was Jeffrey Katzenburg who brought in a new way of doing animated features that was more akin to doing live action films,” the screenwriter shared about Katzenburg’s introduction of a screenwriter to the Disney animation process. “They weren’t used to having a screenwriter, they weren’t used to having a single voice… That was a little different for me. And being a woman, because it was a male dominated environment, but with the story of Beauty and the Beast, I felt it was important to bring a modern Disney heroine to the world.” Having grown up through the Women’s Liberation Movement in the 1970’s, Linda hadn’t seen a Disney heroine that felt modern. “That was another pure drive for me and it made it worth it to stand for who I believed she was.”

3. Howard Ashman passed on his knowledge to her.

“I learned so much from Howard,” Linda shared about working with Howard Ashman. “We didn’t know it was the end of his life. I think Howard did and it’s very bittersweet to think about it now. He was passing things to me and he never would’ve handed them to me, I just landed there… There was a moment when we were talking about Disney movies, animated films, and he was talking about every single scene in an animated film has an umbrella of emotion around it.” The mentor brought up Pinocchio as an example. “He talked a lot about Geppetto’s workshop. The light in the workshop, the warmth in the workshop, the home of it.” Linda Woolverton uses the lessons Howard Ashman taught her on every project. “Sometimes I’m writing something and I think Howard would think this is terrible, I should not do this.”

4. Beauty and the Beast became a musical because of Howard Ashman.

“Howard came from the musical world and he was the one that actually brought the idea of musicalizing the Disney animated feature. It was his whole inspiration that changed everything.” When Linda Woolverton was assigned to Beauty and the Beast, it wasn’t intended to be a musical and she wrote an entire version of the film without any musical moments. But the success of The Little Mermaid, which became a phenomenon while she was working on the film, changed everything. “We just threw that script out and started again… How it would work for Howard with me, he would say ‘Just write through the scene as if it’s not a musical.’” With Howard in New York, Linda would fax her new treatments to him and wait for his reply. “I would fax that to him and it would come back as this incredible song…. The thing about Belle reading all came about because Howard and I wanted to make her a reader. When we set about doing this, we got a lot of pushback that reading was too static of a hobby because you would just sit.” To solve the problem, Linda drew on her own childhood where she was such an avid reader that she would sometimes walk and read while running errands for her mom. “I thought that’s what we’re going to do to make her active, literally move while she reads.”

5. Critics hated the Broadway version of Beauty and the Beast.

“We were Disneys’ first foray into Broadway and there was a lot of resistance and we did not get good reviews at all,” the playwright laughed about the experience. “We got terrible reviews, but the people came and it changed the nature of Broadway itself. There are people who would say that’s a bad thing, but for me, it opened the doors of the theater. It had always been this very adult thing and it blew open the doors and invited children in. But the initial reaction to Beauty the stage production, they were not happy with it.” Linda Woolverton also talked a lot about her education in children’s theater before she became a writer.

6. Disney is working on a new stage production of Beauty and the Beast.

“We’re doing a whole new version of it,” Linda Woolverton broke the news during the Q&A that Disney is bringing Beauty and the Beast back to the stage, but it’s not just your typical revival. “They brought back the original team and we’re reimagining the show, redesigning and reconceptualizing many things and basically doing another version. Which has really been fun for me because there are cringe moments for me that I get to fix now.”

7. She was brought on to help fix The Lion King.

“There was a screenplay before I came on and it was really interesting because there were hyenas and this rogue lion and the hyenas were the antagonists,” Linda shared about the state of the project when she joined The Lion King team, “To me, the hyenas weren’t a worthy opponent. You need a worthy opponent to vanquish.” She morphed the rogue lion into the leader of the hyenas and added a Shakespearean element, making him the hero’s uncle to make the ending more exciting. “There was a lion that Simba had to be stronger than to be a victor.”

8. Aida was supposed to be an animated feature.

“Disney likes to make things in a lot of different forms,” Linda laughed when she was asked about the animated version of Aida, which became a Broadway show instead with music by Elton John and Tim Rice. “ It was meant to be animated. Actually it was Michael Eisner who decided that it should be a stage version instead. It doesn’t really fit in animation in my view.” She also talked about some story changes that she made to the classic tale for this version. “It was really interesting for me because if you know the story at all, these two women are fighting over a man and I wasn’t going to do that. So I took some license and these two women learn to care for each other very much because they’re both princesses and then there’s this one man that they both love, but it wasn’t exactly a traditional approach.”

9. Tim Burton was the best director she’s ever collaborated with.

“My best collaboration was with TIm Burton,” the Alice in Wonderland screenwriter shared. “He didn’t force me to see it his way. If he had an idea he would say ‘Just try it, let’s just try it this way.; He was not an autocrat. Some directors are autocrats and just throw the screenplay out… I fought really hard for my vision because I believe in it and I think it’s important. The best of both worlds is when you work together and make magic together.”

10. The hardest scenes she’s ever written is from Homeward Bound.

While moments in The Lion King were certainly a challenge, the scene that Linda Woolverton had to rewrite the most was the ending to Homeward Bound: The Incredible Journey. “The old dog didn’t make it,” she said, recalling the final scene of the film. “Everybody’s home and they’re going to turn the light out and the old dog, Shadow, comes over the hill. I actually wept onto the keyboard everytime I had to rewrite that scene.”