Carole Holliday has spent most of her career in animation and a large chunk of it at Disney. Her animation credits include Oliver & Company and The Little Mermaid before becoming a Character Designer and Story Artist for Disney Television Animation on shows like The Little Mermaid animated series. Her designs have been featured in films including A Goofy Movie and Tarzan. Carole recently participated in the Walt Disney Family Museum’s Happily Ever After Hours virtual speaker series. Here are 10 things we learned from Carole Holliday. 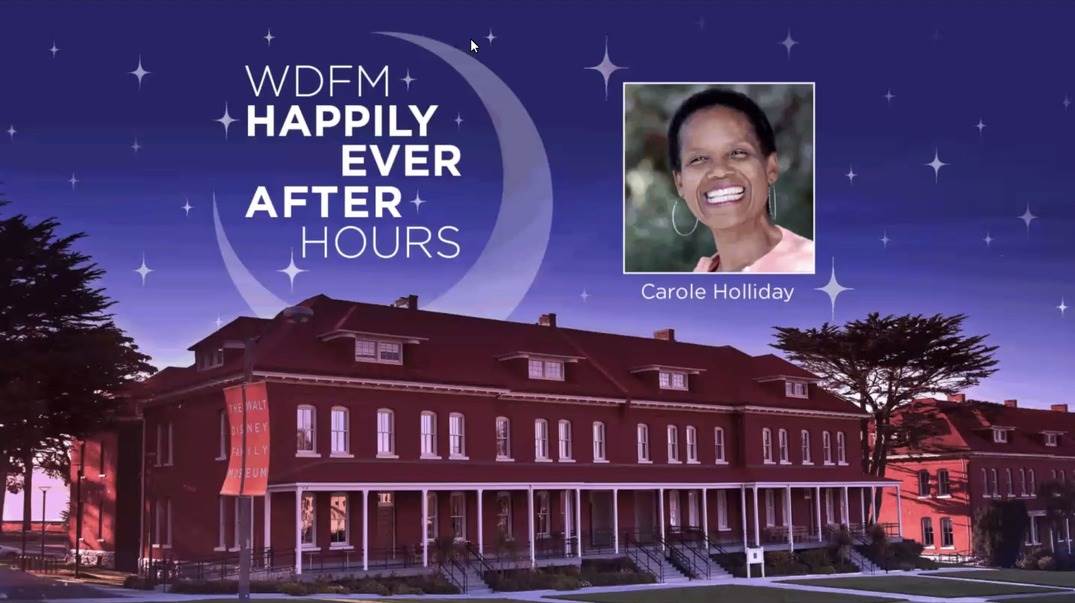 1. She studied at CalArts, but started in theater.

Growing up with an artistic mother, Carole had a passion for theater and was accepted into CalArts in their theater arts program. While there, she became friends with a peer studying animation who told her that Chuck Jones came to give them a lecture. The creator of Looney Tunes was a hero of hers. “It wasn’t until I became a Christian and I realized I was going to have to compromise too much of what I believed,” Carole explained about her conflict between her faith and pursuing acting. She felt like animation was the right path for her and changed her major. “Unlike my classmates, who grew up drawing all the time and loving animation, I doodled. But the most I animated was drawing in the corner of pads that my mother had in her office.”

2. It took three times before she was accepted into Disney Animation.

“It was a trial and error effort,” Carole shared about her attempts at getting hired at Disney Animation. Don Hahn was the person reviewing her portfolio and the first time, he gave her advice that she didn’t take. “The first two times he said you draw really well, you should do quick sketches.” After the second time applying, she met a friend at church who knew Glen Keane and connected the two. Glen shared with her his own story of being rejected by Disney and how he took the advice and filled five notebooks full of quick sketches and got hired. “I drew people at the mall, the beach, bowling alleys, kids.” Glen’s advice worked and she was hired her third time applying.

3. She decided to move to Disney Television Animation.

“When I went initially from Disney Feature to Disney Television, I was going from an animation trainee to being an animator for their bumpers,” she shared about creating bits of animation for Goof Troop and Marsupilami that would be used to promote the shows. “I was like my own little person at that point, whereas as a trainee I would get a little piece of a scene and then I would give it to my mentor and they would make corrections on it… My footage for that time didn’t really count against me. Now I was it. I was the person who was responsible for cranking out the footage.” Carole was also responsible for coming up with ideas for what the characters would do during the bumpers, nobody told her what they should be doing.

4. She became a Character Designer on The Little Mermaid animated series.

“When those were over, they were like, well, you can do character design,” she explained about the job creating bumpers coming to an end. Director and Producer Jamie Mitchell originally hired her for a different role on The Little Mermaid animated series. “He just brought me as a revisionist, but the person that they had was too busy so he was like can you do some designs?” The first character she designed for the show was Hans Christien Anderson, but Jamie taught her a new technique when she was tasked with creating a mean manta ray. Her designs were too light, he taught her how to put more passion into her drawings.

5. She designed Roxanne from A Goofy Movie for free.

“Because of the things that I was doing on The Little Mermaid, because of Jamie, it’s one of those things.” Director Kevin Lima saw Carole’s drawings and wanted her on the team for A Goofy Movie, but with tight budgetary restrictions, he wasn’t able to hire her yet. He asked her to design the character of Roxanne for free. “I was like sure, why not. I drew that and that’s why she has the swoopy hair, because I was working on The Little Mermaid. At the time, I was putting a mole on every character so that’s why she has that mole. Kevin took that to the person in charge and they said ‘I want her to be on my project.’” Officially hired to work on A Goofy Movie, Carole was transferred to Paris where she designed additional characters for the film, including Roxanne’s friend Stacy. “When that was done, that’s when I started going into storyboarding as a revisionist.”

6. Tarzan started as a Disney Television Animation project and saved her job.

Everyone knew that when production on A Goofy Movie ended, their jobs would be over. Carole shared how she received a fax message in Paris announcing that her contract on the film was done, but Kevin Lima had another trick up his sleeve. “Originally it was a TV one before it went to features,” Carole shared about Kevin Lima’s next film, Tarzan. He requested that the team from A Goofy Movie be kept on and moved to that project, which saved Carole’s job. And when the film moved to Disney Feature Animation, she found herself back where her Disney career started.

7. She left Dreamworks’ The Prince of Egypt for religious reasons.

While on a break between projects at Disney, Carole joined Dreamworks Animation’s first film project on a six-month contract by her own request. “It was a beautiful film that was a huge challenge for me because as a Christian, the Bible is very important to me and they initially took liberties that I didn’t feel comfortable with. At the end of six-months when they said we want to renew your option but you have the option to leave, I said I really have enjoyed being here, but I just can’t rewrite the Bible. I ended up leaving… It’s a gorgeous film, but at the time, for me as a story artist, I couldn’t continue.”

“Technically, Glen was not my mentor,” Carole clarified after mentioning the Legendary animator behind Ariel and Aladdin. “I didn’t necessarily have a mentor. They assigned someone to me between The Little Mermaid and when I left, but he didn’t have time to work with me. What I did was set up my own little program where I animated a little scene and did a bunch of drawing and started volunteering… That was my program. I made myself go to the life drawing classes, I animated a little sequence, and I volunteered… It is possible to grow without necessarily having a mentor, but at the same time, learn from the people around you. Be humble. I learned the things I learned from Glen because I just listened. He was super kind.” She was handpicked by Glen to be an Assistant Animator after working hard on preparing photostat drawings for him to work on. He even gave her a scene to animate all on her own of Ariel and Flounder swimming up away from the camera.

9. Trying to pitch an animated movie with a Black lead character in the early 1990’s.

“Fish Out of Water is a project that’s very dear to my heart because when I originally came up with the idea, it was right after When Harry Met Sally came out.” The story was set in the 1940’s about a Black girl who loves big band and wants to play jazz. “I wanted to do something that was set in that time period… I had written the idea and was trying to pitch it around town and people were like it’s a charming idea, but it’s hard because it's Black.” Carole shared that it’s one of only a few moments in her career when she would say she experienced true racism. This was well before the popular Madea film franchise, Disney’s The Princess and the Frog, and Pixar’s upcoming film Soul.

10. Turning her film idea into a self-published children’s book.

Carole Holliday’s passion project recently got a second chance through a self-published children’s book. “I pulled out some of the characters and I was doodling them and I thought this is an idea that has to be done.” Carole may not have had experience publishing books, but she worked for four years on Disney Junior’s Sofia the First turning potential scripts into storybooks that could be tested on focus groups of kids. “Storybooks are not like books you would buy in a store, they were like focus testing. I would illustrate a story for a script, then painted by somebody else and they would be taken to a school and read to a group of kids to make sure they understood it…. So I had the capability of telling single panel stories. What I didn’t have was the capability of painting so I taught myself how to paint by finding stuff on the internet… Then I painted the book and Amazon is great because you can self publish and now it’s out there.” You can bring home your own copy of Fish Out of Water here.