The Jim Henson company has a longstanding legacy of producing excellent entertainment with puppets that goes all the way back to its founder. Brian Henson continues that tradition in a new series created exclusively for Disney+, Earth to Ned. The creators, producers, and cast recently gathered together for a virtual press conference to share more about the evolution of the series and some of the secrets behind this new puppet talk show. 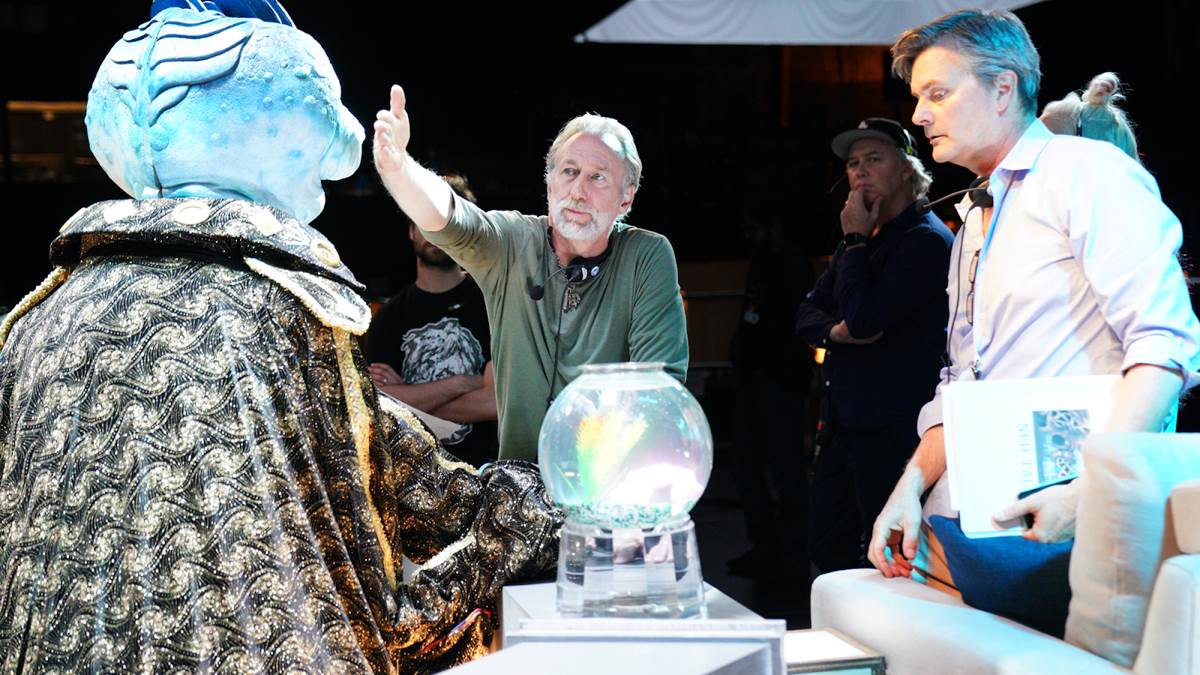 “My dad, he had a talk section of The Muppet Show in season one,” Executive Producer Brian Henson shared. “In season one, Kermit would talk to the guests and in the end, he dropped it because Kermit wasn’t able to push the guests hard enough for it to be exciting… I think what was clear was, with Sesame Street in particular and then The Muppet Show, my dad learned it’s great when I get the Muppets interacting with a celebrity, it really really works because it exposes the celebrity in a more genuine way than a regular interview would… They allow themselves to be vulnerable around puppets much more than they do around people.”

While celebrity guests were a hallmark of both The Muppet Show and Sesame Street, it would take decades for the right team to come together that could make a talk show with puppets not only work, but be highly entertaining. It’s a concept that Brian Henson wasn’t willing to let go of and it almost happened at another network. Most of the creative team behind Earth to Ned had worked on Creature Shop Challenge for the SyFy Network. Two of the producers, Joseph Freed and Allison Berkley, introduced the concept of doing a post-show hosted by a monster. That’s where Ned came from, originally designed as the post-show show’s host with the intention of calling it “Ned Talks,” a play on TED Talks.

A talk show only works if an interesting host has engaging guests and the conversation can flow naturally, but Ned is a large, highly complicated animatronic puppet that takes six people to operate. “Traditionally in our company, we’ve typically said if you have more than two puppeteers on a puppet they can’t improvise,” Brian Henson explained about achieving the impossible on this project. “You can’t get the puppeteers to be able to gel. At that point, you have to be strictly script-bound so you can rehearse and rehearse and rehearse. So definitely six puppeteers on one character improvising, I think we said to Disney ‘Yes, it’s going to be fantastic, of course we’ve done it before.’ We didn’t know how and it was really hard for the first couple of weeks for the performers. And then once they gelled, it worked really well.”

Paul Rugg plays Ned, who has a lot of experience with voice work on shows like Animaniacs and Freakazoid, but never tried his hand at puppetry before. “When we were all cast, Brian is the world’s best puppeteer and I remember when he called me to tell me I got the part, he said, ‘By the way, Paul, this is the most technologically advanced puppet we’ve ever given anyone and you’re the guy, we’re giving you this head so don’t blow it.’ I was like ‘Oh my gosh,’” Ned’s voice and improviser shared. “So for Ned, I operated the mouth from a position, so I’ve got a glove. Next to me is Allan Trautman, one of the world’s best puppeteers, is doing the eyes. We’ve got [Mick Morgana Ignis] inside doing the body, we’ve got Donna Kimball doing the front hands, and then we have [Raymond Carr] and [Jack Venturo] doing the other hands and when we first tried this, I was like ‘This will never work. This is impossible, this will never happen.’ And then one day, we rehearsed for a month just to get it right. One day, I’ll be dog gone if this didn’t look like one character and I can’t tell you how that happened, it was just amazing.” 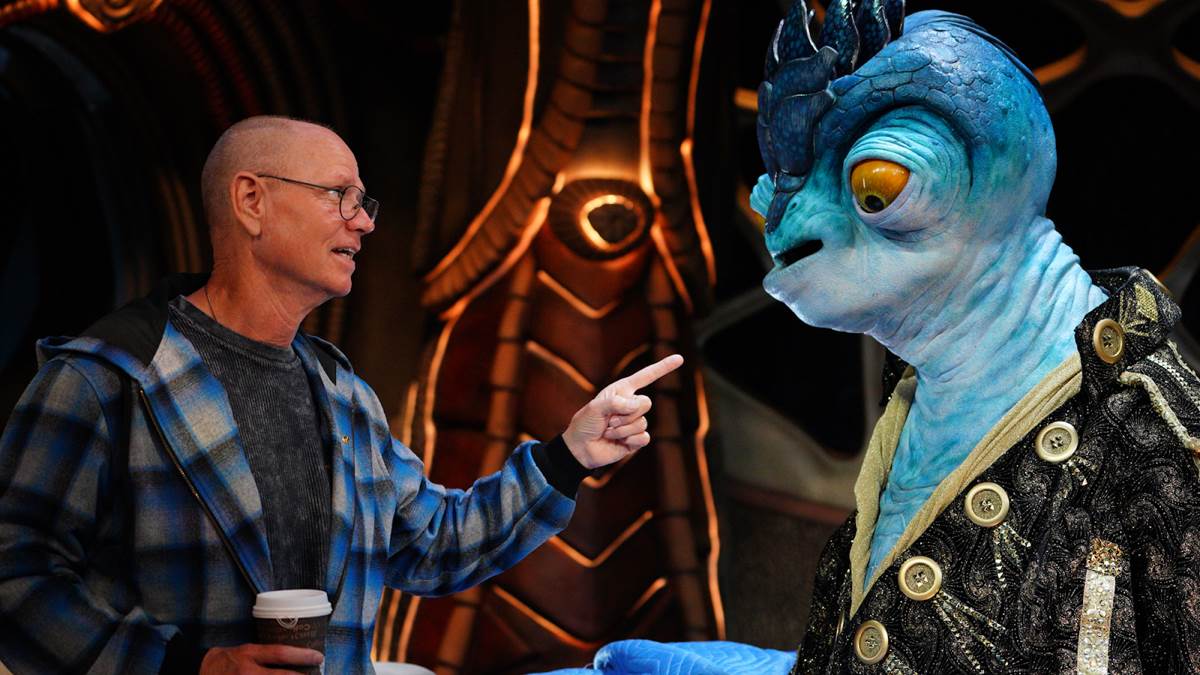 Executive Producer Joseph Freed gives the team that brought Ned to life a lot of credit for achieving the impossible. “If you watch those scenes knowing it’s improvised, it is kind of a magic ballet that I still don’t quite understand how they do it,” Joseph said. “Because if Ned spontaneously decides to laugh, which means the person inside the body leans backward and the person controlling the eyes squints the eyes and the people controlling the hands throw the hands up in the air and all of it happens simultaneously as if they’re all sharing Ned’s brain. Watch the show with that in mind sometimes and it really is amazing what they’re able to accomplish bringing that character to life.”

Like most projects bearing Jim Henson’s name, Earth to Ned keeps the tone light and fun, but the cast was very aware of the legacy they were following in the wake of. “We shot on the Henson lot, which was also the Chaplin lot, so every morning when you get there and every night when you walk out, there’s a giant Kermit dressed like the Tramp,” explained Colleen Smith, who plays the sentient computer system B.E.T.I., a digital puppet that came with its own challenges for the improv expert. “You never forget where you are and both legacies. It’s amazing, you just really want to do it proud because you know there’s a lot of very vocal fans who have a lot of opinions and you don’t want to let them down because you know how invested they are in it.”

Michael Oosterom plays Cornelius, Ned’s servant and sidekick who steals the show. “In my time working at the Henson Creature Shop, I got to work with a lot of people who knew Jim,” Michael shared. “The greatest compliment is when you’re working on a project and when working on this project, one of those people who's been around since the beginning would say ‘Jim would’ve really liked this, Jim would’ve loved this.’ That’s when you feel like you’re on the right track. And I think this show is definitely that.”

Even the puppet of Ned has his own evolution that can be tracked through past Henson productions, as Brian Henson shared. “Ned as a puppet is a further development of Pilot from Farscape and Pilot was a further development of Richfield from Dinosaurs. So it started on Dinosaurs, this idea of making a really big animatronic puppet, which allows you to do more inside the faces. But the only way you can do it is if you can come up with a reason why the character can never move because now it’s got so much structure underneath it and people underneath it that it can’t walk around. So all three of those characters, Richfield and then Pilot and now Ned, we had to come up with a justification of why they never moved. I think we are reserving the right to explain why Ned never moves so we all have our theories, but we haven’t committed to anything yet on the show.” In the tradition of Disney and Henson storytelling, Earth to Ned isn’t just a talk show. There’s an actual plot that progresses the characters and their dynamics as they move through each episode’s topic, which created a whole other set of challenges for the cast. “Knowing that we sort of had a story that we were telling, we didn’t always do all these interviews in order,” Paul Rugg shared about the struggle to keep continuity in an improvised setting. “So we would have to remind ourselves within the structure of the series what Ned’s arc is and what Cornelius’ arc is and B.E.T.I.’s arc is. So that was sort of a challenge to know in every episode what was going on with Ned or B.E.T.I. or Cornelius in the overriding story of them trying to destroy the earth. But it turned out to provide a little engine for the show that there’s something bigger going on as we progressed through. But it was a challenge to remind ourselves what their personal headspace was for each episode.”

While most of Earth to Ned is unscripted, there was a team of writers present to help craft the stories, come up with themes for each episode, and also help to make sure the show maintained a family-friendly level of humor while also being aimed at a more elevated audience than Disney+ typically aims for. “I give a lot of credit to our writers, in particular Eliza Skinner, who has this very whimsical adult sensibility,” producer Vince Raisa explained. “Holding onto the adultness of it, making something that makes us laugh rather than looking down on an audience or rather coming from a younger perspective and looking up. That’s something we always try and do to kind of capture that tone, something that is funny for everybody. And it’s not something that many people can pull off. I think we’re really successful with that kind of humor.”

Booking guests for the show was harder than you might think since the host wasn’t another actor or a celebrity that the guests were familiar with. Executive producer Allison Berkley, who had experience working on The Rachael Ray Show, set about finding guests for the first season with a specific vision in mind. “We came up with a wish list and we did some test shooting, sent them around to agencies and were really fortunate that we got incredible guests who really wanted to come play on the show and improv,” Allison explained. “I think after our first rehearsal or two, we really figured out how to produce those guests and give them space and time because the puppeteers also have to stop every eight or ten minutes, too. So you really have a different type of talk show where you’re asking a guest to come and sit for a little bit longer and every single one of them left saying, ‘When can I post, when’s the show?’”

Knowing that the end destination was Disney+, the producers also injected some fun Easter Eggs for Disney fans to spot. “There are little drops in there for hardcore Disney fans,” explained executive producer Joseph Freed. “In the horror episode, there are sound effects from The Haunted Mansion that are in there if you notice them. There are little touches like that through the episodes where if you’re really a Disney devotee, you’ll recognize some things in there… I think we wanted to feel like we’re at home on Disney+ and at home in the Disney universe as well as our own universe.” 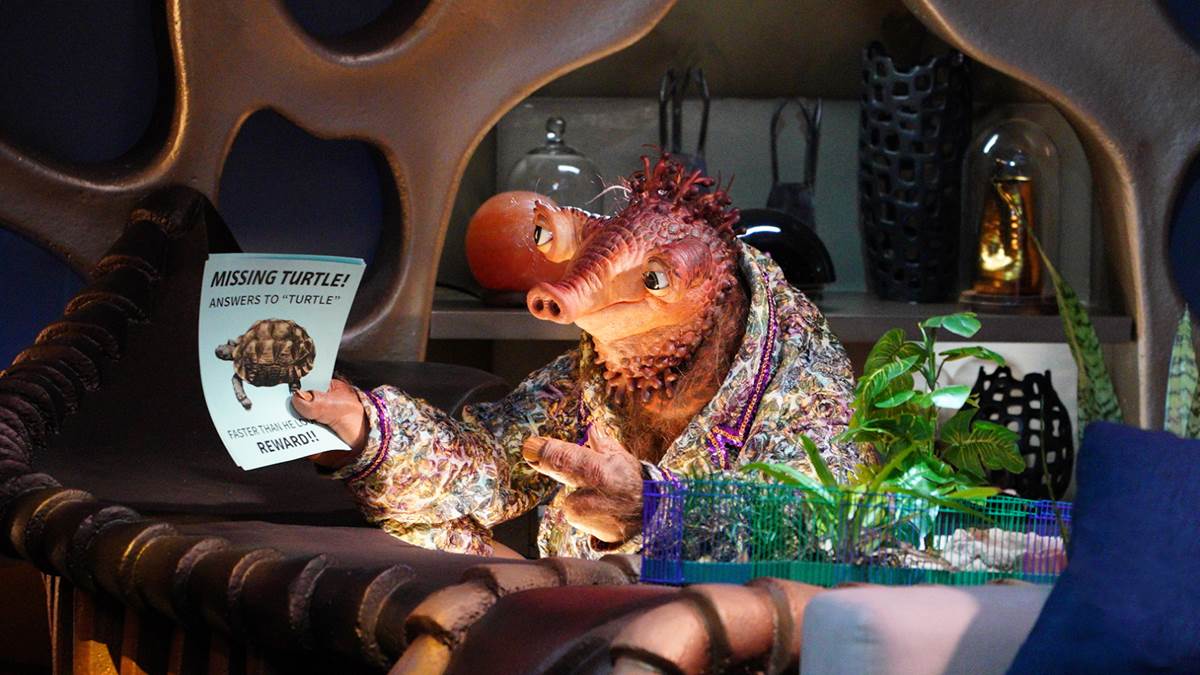 Believe it or not, for a talk show hosted by aliens sent to destroy earth, there’s a message that the creators hope audiences take away from the series. “I want people to laugh at themselves,” Brian Henson explained. “To me, what we were really trying to do is get people to laugh at themselves. Laugh at mankind and that’s what I hope. Maybe if this show can just a little bit get inside of people’s skin so that they’re not as hard on themselves and not as hard on other people… It’s dark times right now, but a lot of it is how hard people are on themselves and on other people. How unforgiving people are both to themselves and to other people and I hope coming out of this, they can catch that thing that we’re trying to do on Earth to Ned that you can always laugh. You can laugh at yourself and you can laugh at each other and that laughter is so healing vs. just being hard on yourself and hard on each other.”

The first ten episodes of Earth to Ned are now streaming on Disney+.