Legendary Disney Animation Directors Ron Clements and John Musker have spent the majority of their careers co-directing some of the best animated films of the modern era, including The Little Mermaid, Aladdin, Hercules, Treasure Planet, The Princess and the Frog, and Moana. Earlier this summer, the duo held a virtual presentation at the Annecy Film Festival where they talked a lot about their careers and what they’re doing now (click here to read our full coverage). The Walt Disney Family Museum recently hosted them for a virtual Happily Ever After Hours, which retread a lot of the same ground as their Annecy event. Below are a few new things we learned. 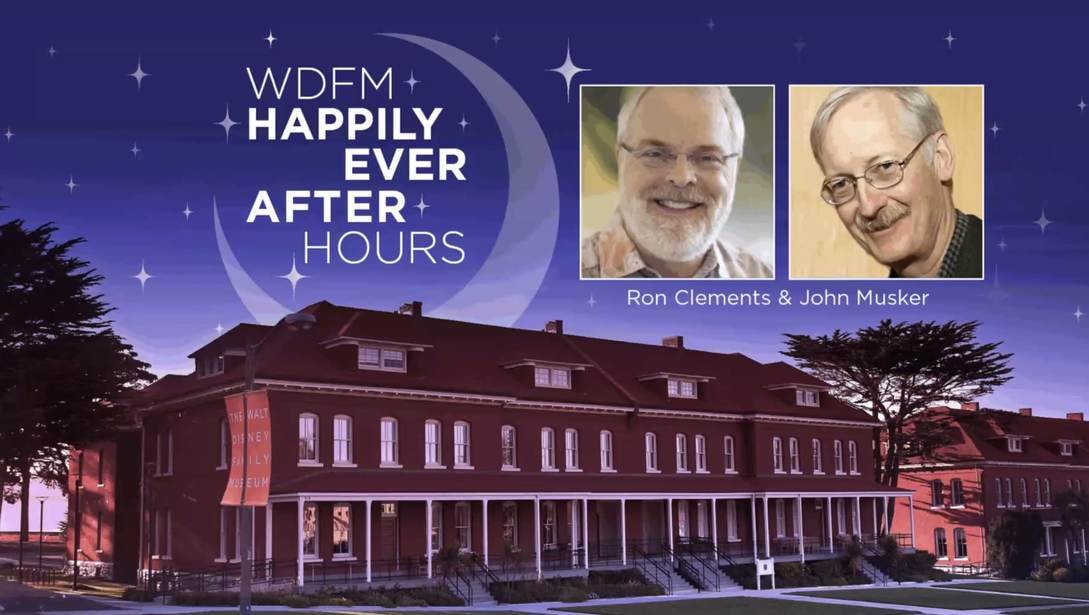 “Ron was the one who suggested making a movie about Basil of Baker Street,” John Musker shared. “he was a big Sherlock Holmes fan.” Ron Clements pitched the idea while working on The Black Cauldron, which is also the film where Ron and John first started working together. Ron was working on the story team, but clashed with the other writers. He was a big fan of the Lloyd Alexander books and was unhappy with the direction the film was taking. John Musker had been assigned as a director on what became The Great Mouse Detective and the rest is history.

“Me being a director, I really owe that to Burny Mattinson,” Ron Clements said. Burny Mattinson was going to co-direct The Great Mouse Detective while Ron was working in the story department. Ron Miller was a producer on the film, but when he left Disney, Burny Mattinson took over that role and could no longer fulfill his directing duties. He recommended Ron for the job, which is how he became a director. After that film, Ron and John put their heads together on The Little Mermaid.

“Under the Sea” Was Supposed to Open The Little Mermaid

When Ron and John first met with Howard Ashman before the story for The Little Mermaid was fully formed, the Broadway legend had an idea for a song to welcome audiences to the undersea world. “For a little time, ‘Under the Sea’ was going to introduce the movie, kind of welcome you to the world,” Ron Clements explained. “So we had another song later called ‘Merman,’ like look how wonderful the guys around here are and Howard hated that.” The cut song “Merman” would’ve been sung by Sebastian after discovering that Ariel was in love with a human. Instead, “Under the Sea” was moved to that place in the film and another song written for the sailors, “Fathoms Below,” was shortened and moved to the opening of the film. John Musker also recalled how influential Howard Ashman was on their approach to storytelling. “He ended up becoming a mentor to us and he was really only a year or two older than us, but he had all this experience in musicals.”

The Little Mermaid Was Supposed to be the First CAPS Film

Amongst all of the technological advancements on their films, one of them didn’t go according to plan. The CAPS system, designed to move the cel painting process into the computer, was meant to be used on The Little Mermaid. In the end, it would go down as the last film to use the traditional painting process with just one shot in the film using the new digital method. “Little Mermaid was a very complicated film in terms of effect animation,” Ron Clements explained, citing things like the ocean waves rolling as being too complicated for the earliest version of the CAPS system to handle. He also squashed rumors about the films actual budget, which was around $20 million, contrary to online rumors that typically double that.

“We wrote the script for Robin Williams in his style without knowing if he would do it or not, we took a big risk,” Ron Clements explained about their hopes that Robin Williams would be pleased with the script and accept the part. “We pitched it to Robin after we’d written the script and had some experimental animation.” Disney animators had used audio from one of William’s stand-up comedy specials set to Genie transforming into different impersonations. “Fortunately, he liked it because if he hadn’t, I don’t know what we would’ve done.” Ron also shared that Williams would do 4-hour recording sessions, first using the script and giving them lots of variations on every line, then dishing out adlibs that were often used in place of their written dialogue. “We’ve had a lot of fun with voice actors, but I’ve never seen anything like Robin Williams.”