The Space Race in the 1960s was one of the most critical battle lines during the Cold War. The United States would win this battle but would suffer many defeats as they scraped together the people and equipment that created NASA. The Right Stuff based on the Tom Wolfe book and the 1983 film aims to fill in the gaps about the people and what they did as America reached for the stars. 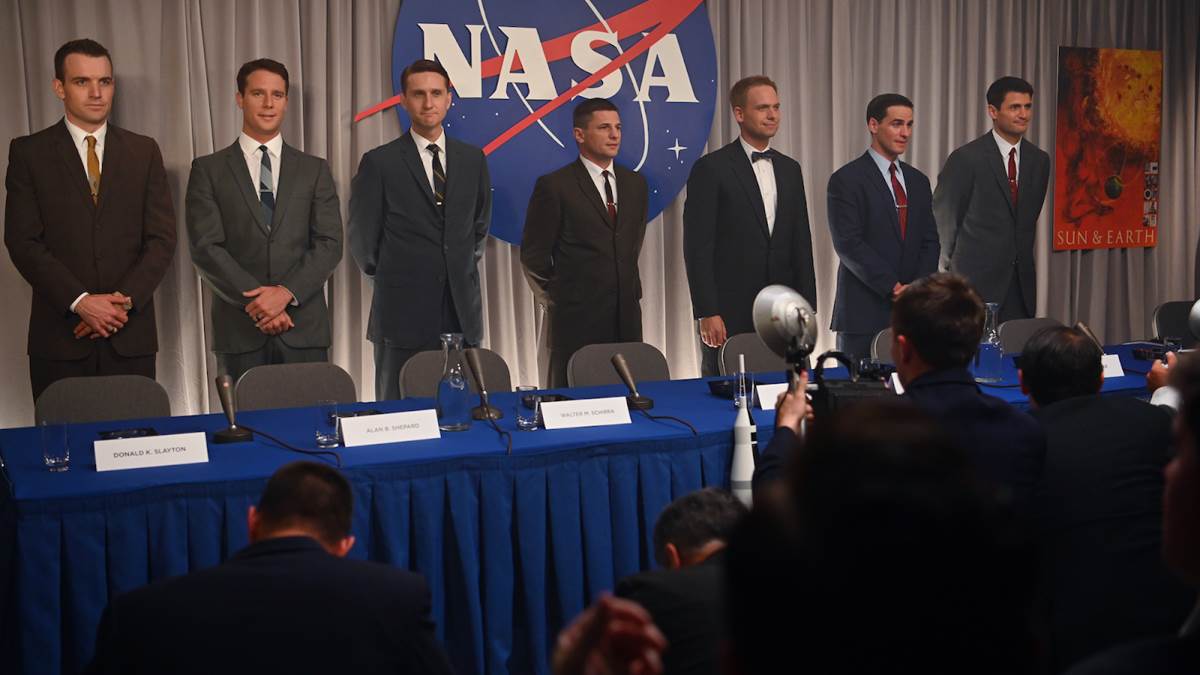 Opening on the cusp of Alan Shepard’s historic first flight into space in 1961, we meet Shepard and John Glenn, and a whole lot of tension between the two legendary figures. From there we jump back in time to the formation of NASA and the rigorous testing the astronaut candidates had to endure before being chosen for the Mercury Seven program.

The first five episodes of the series focus on the formation of the program, the testing the seven men endure, and the toll this new role has on the men and their families. The original 1983 film had to pick and choose certain elements of Wolfe’s book in order to make a feature film. The 2020 series has the latitude and luxury to explore and flesh out so many fascinating aspects of the story that would have been left on the cutting room floor.

We meet John Glenn, Alan Shepard, and Gordo Cooper, played by Patrick J. Adams, Jake McDorman, and Colin O’Donoghue. While viewers get to see the other astronauts on the periphery of the story, it’s Glenn, Shepard, and Cooper who occupy the storyline. The rivalry between Glenn and Shepard to be the best and the first in space fills the air from the first moment of the show and throughout the subsequent episodes. Glenn and Shepard couldn’t be two different people. Shepard is constantly searching for companionship in numerous affairs while Glenn is strengthened by the love and support of his wife Annie, played by Nora Zehetner, whom he never strays from.

Patrick J. Adams captures the essence and look of the legendary Glenn. Adams may not look exactly like Glenn, but he does bring the famed Ohioan to the screen with his character and charm that captivated the country. Adams brings a soulful presentation of Glenn as a hard-working, popular man, who struggled to interact with his fellow astronauts. 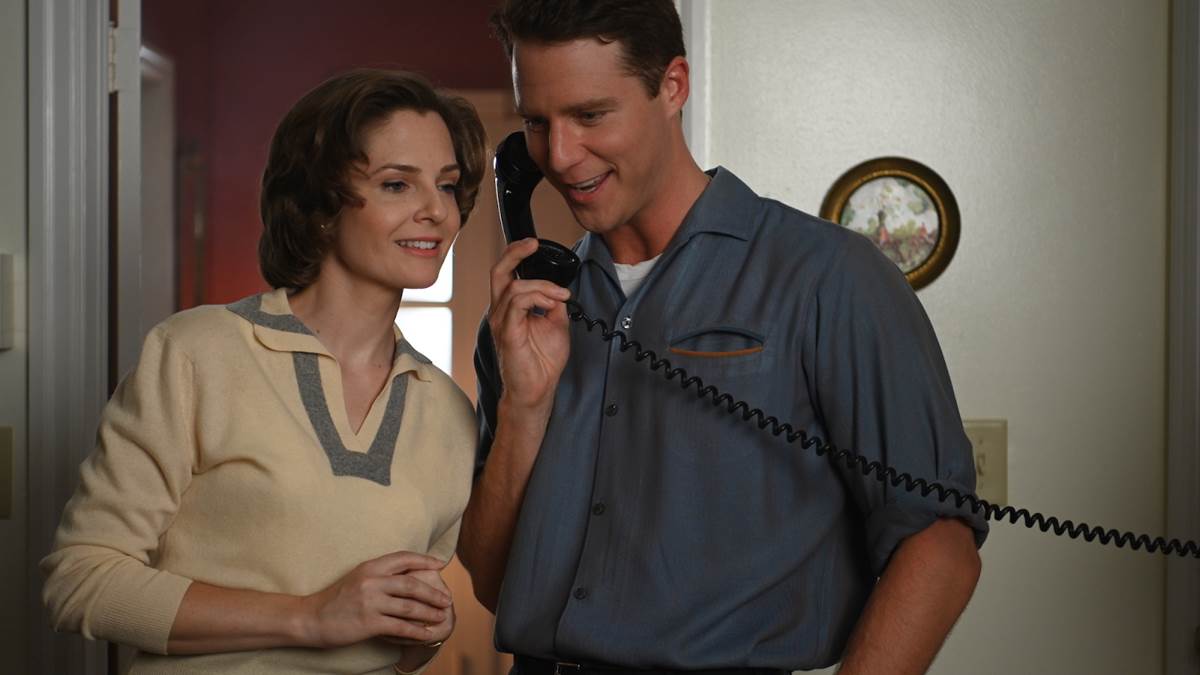 McDorman has a difficult task in making Shepard, a legendary womanizer and famed test pilot, human. For moments the viewers will loathe Shepard and his childish behavior, but then feel compassion and empathy as Shepard struggles to adapt to the training. McDorman’s portrayal is so good that while you might disagree with Shepard’s private life, we cheer for his success.

Adams and McDorman are perfectly cast in their roles and not only bring these astronauts to life, but they make the viewer compelled to continue watching. Both men portray a version of Glenn and Shepard that feels real and genuine, while using some creative liberties.

Colin O’Donoghue as Gordo Cooper is the third part of this three-part lead. Cooper is one of the most interesting characters on screen, because at the time he is invited to NASA, his wife Trudy, played by Eloise Mumford, has left him. Cooper fears a divorce would end his chances and he begs Trudy to take him back. A feature film would gloss over the relationship issues between the Cooper’s, The Right Stuff, explores their complicated relationship in detail.

O’Donoghue and Mumford sizzle on screen. They are a perfect duo and they play off each other so well that viewers will empathize with them as they try to make their relationship work, but also feel the strength and spirit of Trudy. While the wives of the Mercury Seven were paraded around as the perfect wives who stayed home and prepared their husband’s favorite meal, the printed stories did not tell the full story.

Trudy Cooper was a licensed pilot and had her own dreams piloting. Seeing Trudy speaking with Jerrie Cobb, a member of the Mercury Thirteen, and the first woman to pass the same testing of the male astronauts brings a note of equality that has been glossed over in the history books. Seeing Cobb included in the story and her attempt to recruit Trudy into the female core of astronauts being proposed, shows viewers a more in-depth picture of the reality of women’s desire to join, and the rejection of the all-boys club. 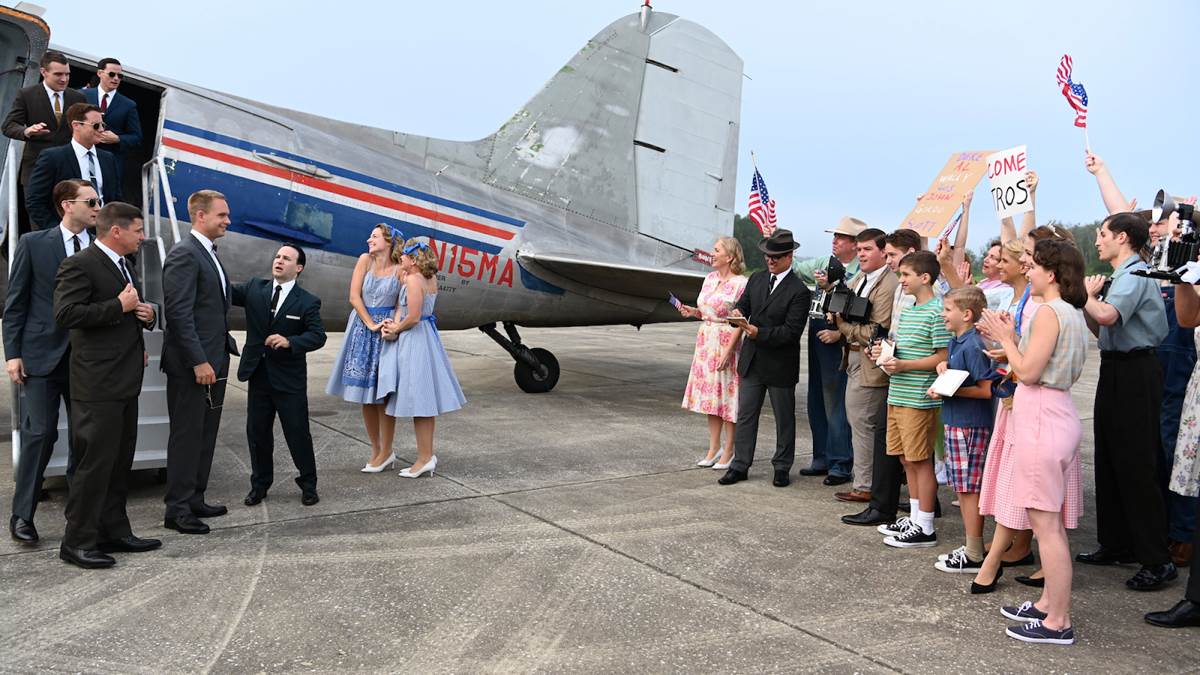 The Right Stuff does not shy away from other controversial issues from the day. Wernher von Braun, the famed scientist and rocket developer is also included in the series, but the truth about von Braun is not skirted around. A former Nazi during World War II, von Braun is not revered as being a genius, rather he is loathed for his arrogance and his Nazi past.

The Right Stuff is a fantastic look back at the race for space. While the focus is on Glenn, Shepard, and the Coopers, viewers meet all the Mercury Seven and get a snapshot of a truer version of the lives they lived.

The Right Stuff gets 4 Mercury Capsules out of 4 for bringing humanity to the mythical figures of the modern day. These seven men were not perfect, they had their faults, and this show gives us a truer version of the people who have been put on a marble pedestal.

With America on the cusp of further lunar landings, and an eventual mission to Mars, The Right Stuff is the perfect show to make everyone excited about space. The best part is that the show will have subsequent seasons about the Gemini and Apollo space missions. I for one cannot wait to see what the producers do in bringing to the screen the whole space program.