‘October Frights’ continues with Hollywood Pictures psychological thriller, The Sixth Sense. The film was a blockbuster juggernaut of 1999, but does the M. Night Shyamalan tale still have what it takes to frighten the audience of 2020? It’s time to see some dead people. 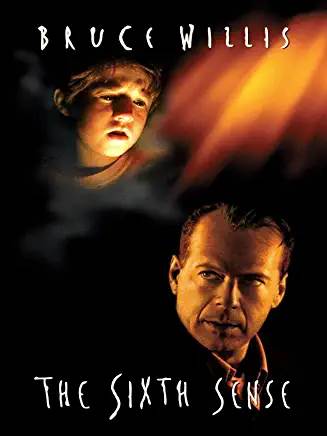 Dr. Malcolm Crowe (Bruce Willis), a noted child psychologist in Philadelphia is looking to redeem himself after a disturbing incident with a former patient named Vincent (Donnie Wahlberg). When he meets Cole Sear (Hayley Joel Osment), Crowe sees a lot of similarities with Vincent and a chance to help a troubled boy while easing his own conscience.

Students and teachers at Cole’s school see him as a freak who doesn’t belong. Cole is having trouble communicating with his mom (Toni Collette) and through a burgeoning friendship with Malcolm, Cole feels comfortable enough to share his secret. Cole can see and communicate with dead people.

At first Malcolm struggles to accept this truth but eventually believes Cole and works to help him deal with this problem. With Malcolm’s assistance, Cole begins to speak to the dead people he sees and even works to help them resolve some issues. As Cole starts to flourish at school, he finds he doesn’t need Malcom anymore. Before they depart as friends, Cole shows Malcolm how he can talk to his wife.

Since the incident with Vincent, Malcolm and his wife Anna (Olivia Williams) have been living different lives and not communicating. As Malcolm returns home from his last visit with Cole, he finally talks with Anna and finds peace.

This is director M. Night Shyamalan’s first film, and almost twenty years after its release, it holds up beautifully. Shyamalan is brilliant at holding a long shot and allowing the actors to control the scene with closeups that set the tone of the film. The creepy factor that Shyamalan induces with ordinary scenery, like Willis walking alone at night, helps establish the fear factor for the movie. Shyamalan also follows his actors in multiple scenes walking right behind with the camera and allowing the audience to experience the fear with the characters.

Bruce Willis is restrained in his performance and he gets to play a part that is caring, thoughtful, and intelligent. Malcolm Crowe knows what he is talking about, and from the first moment he speaks with Cole until the end of the film, Willis is so good in this role that you will believe that he is Malcolm Crowe a noted child psychologist and not an action hero.

Hayley Joel Osment is perfect as Cole Sear. Almost two decades after first seeing this film, there is no one else who could have played Cole with heart and emotion like Osment did. The young actor had a tough road to travel as he was forced to play Cole with a range of emotion, from sweet innocent boy, the tormented child, the skeptic, and then moments of intensity needed to convey the raw emotion of Cole. Osment does all of it in this film with a precision that many seasoned actors would never be able show on the screen.

Toni Collette as Cole’s mom Lynn is a small role, but her screen time shows a single mother who is doing her best to provide for her son. Lynn is someone we can empathize with and root for. In many other films the role of Lynn might have been used to establish how much of a deadbeat she is and how unworthy she is to have Cole as her son. Collette gives Lynn heart and emotion and a shot of normalcy.

I cannot think of anything wrong with The Sixth Sense.

The Sixth Sense is a perfect film that continues to hold up for its chills and thrills. Even though I knew the ending, from the small jump scares to the psychological thrills, The Sixth Sense continues to scare because of a well written script, actors on top of their game, and a writer/director who was up to bat for the first time and swung for the fences.

The Sixth Sense gets a 4 Golden Popcorn Buckets rating for originality, creativity, and for still being scary almost twenty years later.

Next week we have some laughs for our ‘October Frights’ with Jim Varney’s Ernest Scared Stupid.