Rick Riordan brings his epic ‘Trials of Apollo’ series to a close with the fifth and final book in the saga, The Tower of Nero. It’s the concluding act for the god Apollo who has been forced to take on the teenaged form of Lester Papadopoulos. Partnered with Meg, a refuge of Emperor Nero, the two make their way to New York City for a confrontation with Nero and Python in hopes of saving the world from their destructive acts. 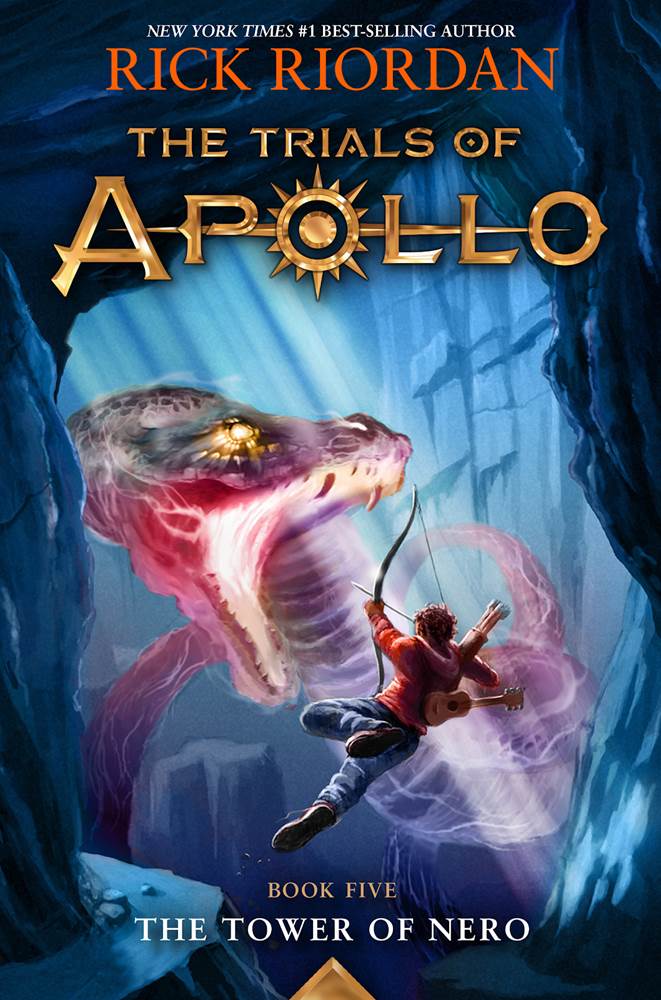 Riordan has made his name for being the king of mythology stories, and for this last act in the ‘Trials of Apollo’, he pulls out all the stops to bring a thoughtful and happy ending for our main characters. From the first page of the first book to the last, Riordan has never strayed from allowing Apollo to learn and grow from those who help him.

In the form Lester, Apollo is cast out of Olympus. Readers have come to empathize with the vain and self-centered immortal, who has learned that there is more to life then being a god. Being all knowing is not all that it is cracked up to be. Riordan does not shy away from having characters make the ultimate sacrifice, and The Tower of Nero sees that happen too, but it is the fantastical level of development we see in Apollo that makes this book and the series so memorable.

The confrontations are as expected, epic clashes of good vs evil, but what really drew me to this series was Apollo. In human form, Apollo is a teenaged Lester Papadopoulos who must learn to be human, while facing the evil of undead Roman Emperors.

As each book in the story has unfolded, Apollo has learned much about himself, the power he had as a god wasn’t as important as the people in our lives. Apollo learns to outgrow the desire to obtain his god status because he finally finds a life worth living.

While he is Lester, the god is a normal human, who learns greater value from his friendship/servitude to Meg. It is her friendship that makes Apollo a better person and enables him to have the will to complete a dangerous quest to restore the oracles and defeat the Emperors. Apollo would never have known his true value were it not for Meg.

When the moment comes that Apollo faces Python, he is alone without help and forced to fight this battle with his own strength. For the immortal god Apollo, who is anything but immortal in this battle, he must make a decision that could have dire consequences. Is Apollo willing to sacrifice himself to defeat Python?

Meg is the opposite of Apollo in every way. It is her guidance and leadership that helps shape Apollo to be the character that he is in The Tower of Nero. His fluctuating character traits are only made whole by the relationship that he has with Meg. On the other hand, it is Meg’s noble character that never waivers and allows a god to find his humanity.

There is one point in the book that Apollo is told to stumble around and cower in fear as a ruse for Nero. Apollo of course says he can play that role easily. This idea says so much about the growth of Apollo. Though the god may not have been in fear when he was in immortal form, Apollo has certainly been stumbling around in existence not contributing much.

Nero is the classic villain that would just as soon burn the entire city he lives in down. This horrid man would kill thousands on a whim, and while Apollo hates Nero, he reconciles with the fact that as a god, Apollo had also committed unspeakable acts. A reader wouldn’t think you can teach an old god new tricks, but Riordan does this superbly through his narrative and his brilliant development in Meg McCaffrey and Apollo.

The Tower of Nero is about sacrifice. How far are you willing to go to achieve a just resolution? To readers they will watch as Meg and Apollo continue to fight this battle together and hope for a positive end.

Favorite characters of the past all make an appearance in one form or another in The Tower of Nero but do not be fooled in thinking that Apollo and Meg need other characters to end this saga. The Tower of Nero is the quintessential cherry on top of ‘The Trials of Apollo’ sundae series.

Sometimes one must travel to the realm of chaos to find their redemption and rebirth. For Apollo, chaos brings the perfect start to a new life.