Universal Orlando Resort has been going above and beyond since the reopening to make sure the Passholders know how much they value them. These efforts include extra discounts, early entry times, and the latest addition: a VIP Thrill Tour. Available through the end of the October, Universal Orlando Passholders are able to reserve their place on this exclusive tour and get front of the line access, a commemorative lanyard, along with some behind the scenes experiences for the discounted rate of $59.99 plus tax. 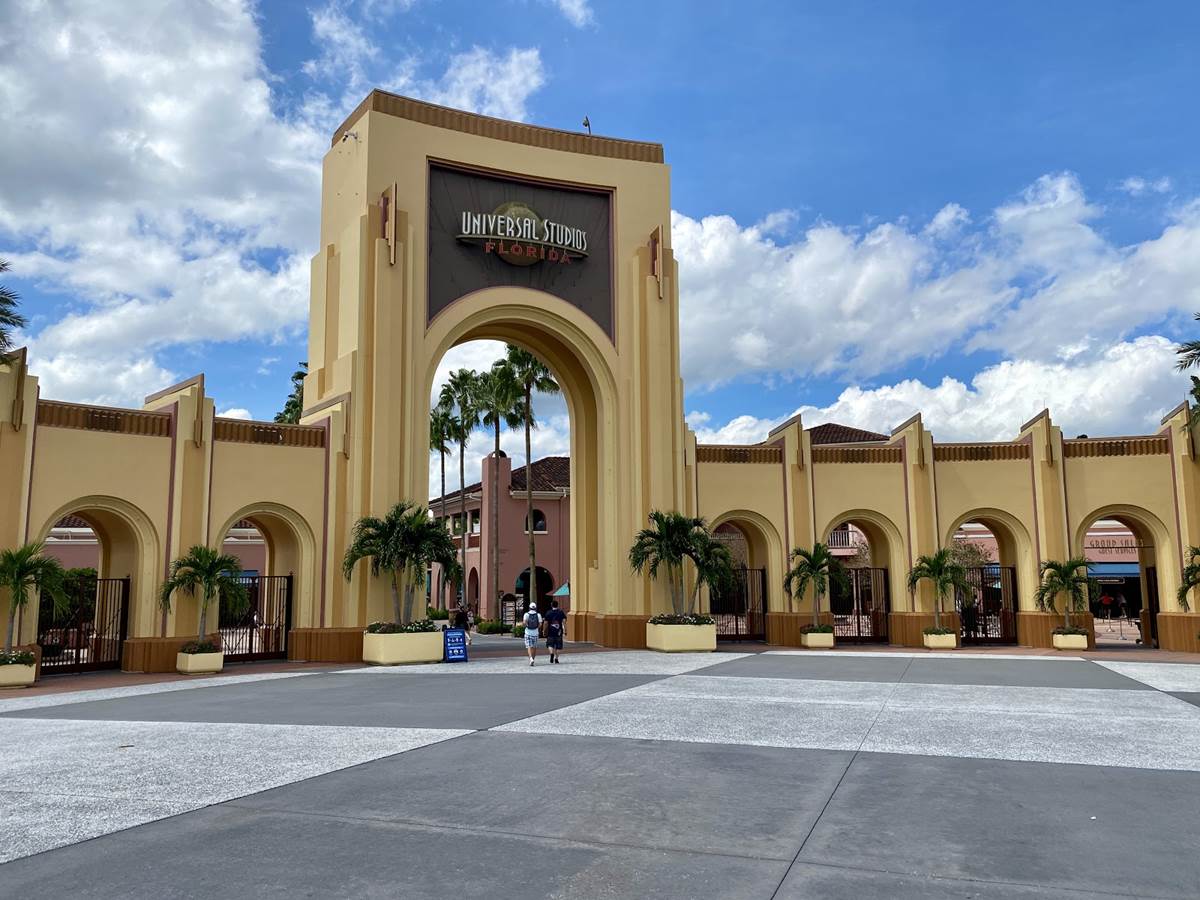 Starting at the VIP Lounge at the entrance of Universal Studios Florida, the tour steps off twice a day at 9:30 a.m. or 2:30 p.m. and can accommodate up to 12 guests per tour. As a theme park nerd, tours are very hit and miss for me. They are either designed for the first time visitor or the diehards that have done everything. Yet, thankfully, this one was set up perfectly for the casual Passholder. After meeting our guide, Jacob, and receiving our VIP lanyard (you really get second looks when you have one of those on) we were off to our first stop — Transformers: The Ride – 3D. 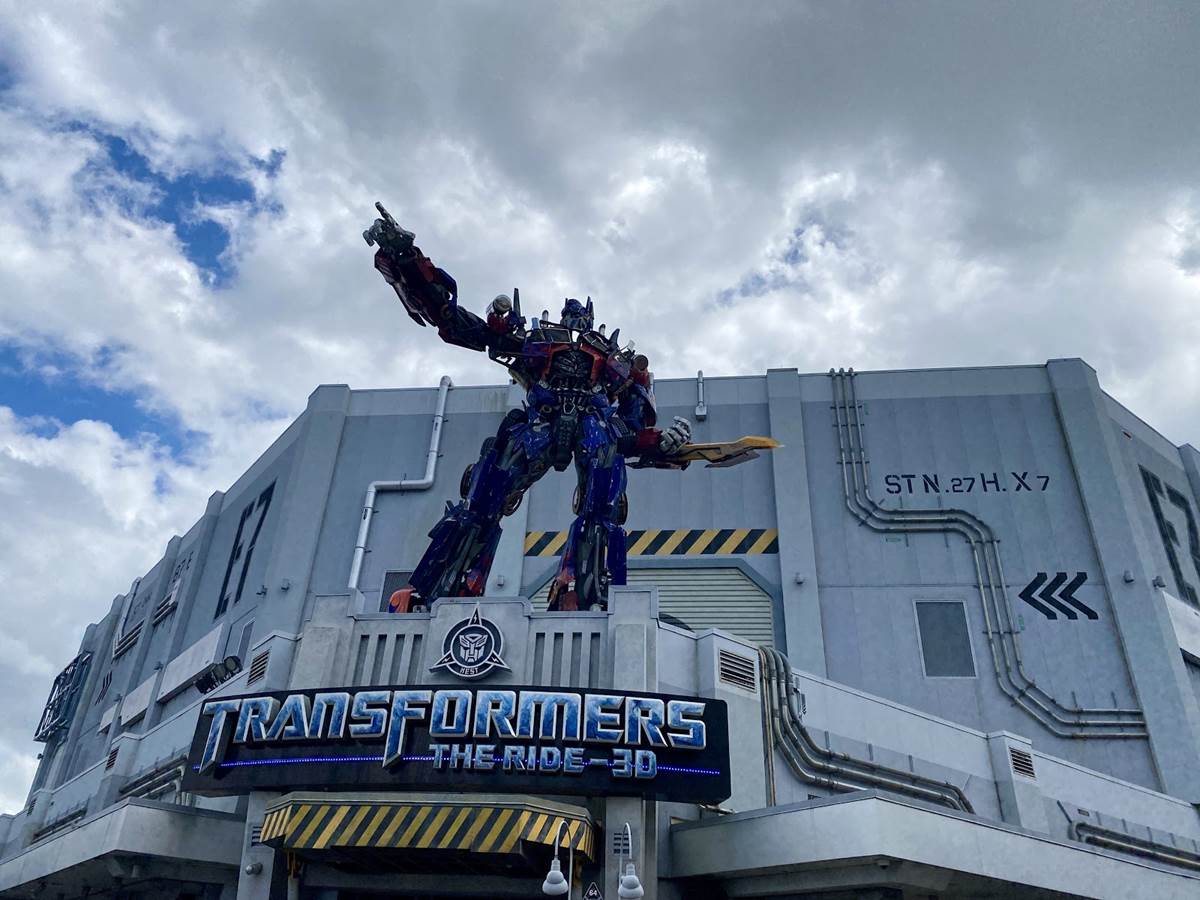 Before we ventured into the ride, we stopped at the back of the building where Jacob gave us some history of the attraction. He also shared a story about how the ride vehicles were too large to bring in a normal way so they had to be helicoptered in to the second story and loaded through special doors — which are still in plain sight. 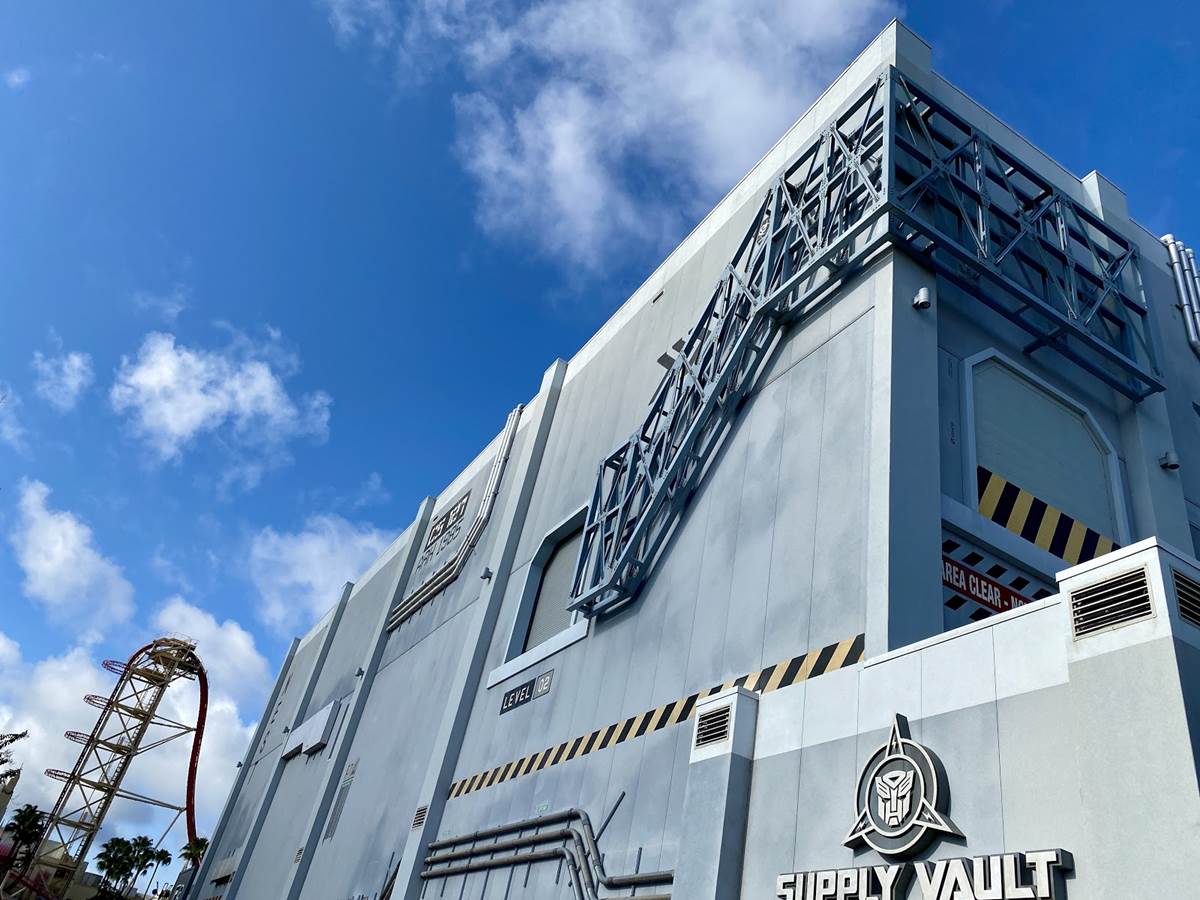 Once inside the Team Member-only area, we were shown a map of the building and were able to get a peek at the control room through the window on the door before we were recruited to help the Autobots defeat the Decepticons! Our next stop was Revenge of the Mummy and, for me, the highlight of the entire tour. Once all of our bags and such were placed in the lockers, we were off to the VIP entrance. While waiting for our own private ride vehicle, Jacob shared with us some of the tributes to the previous resident Kongfrontation that can be found in the attraction. I won’t spoil all the secrets but, the next time you are in the queue, pay attention to the hieroglyphics. Plus, one of my favorite tributes in the treasure room on the ride itself. After a quick trip on one of the best attractions at Universal Orlando (in my opinion), we were taken through a side door and actually stood on the floor as the coaster ran around us. This was the point where I felt this tour was worth every cent. If you have ever wanted to feel what it is like to have a roller coaster speed by you just a few feet away, this is where that dream can come true. As we headed out the door to return to the park, the light shown enough on the ceiling that we were able to catch a view of some of the leftover pieces of Kongfrontation track that were too large to be removed. 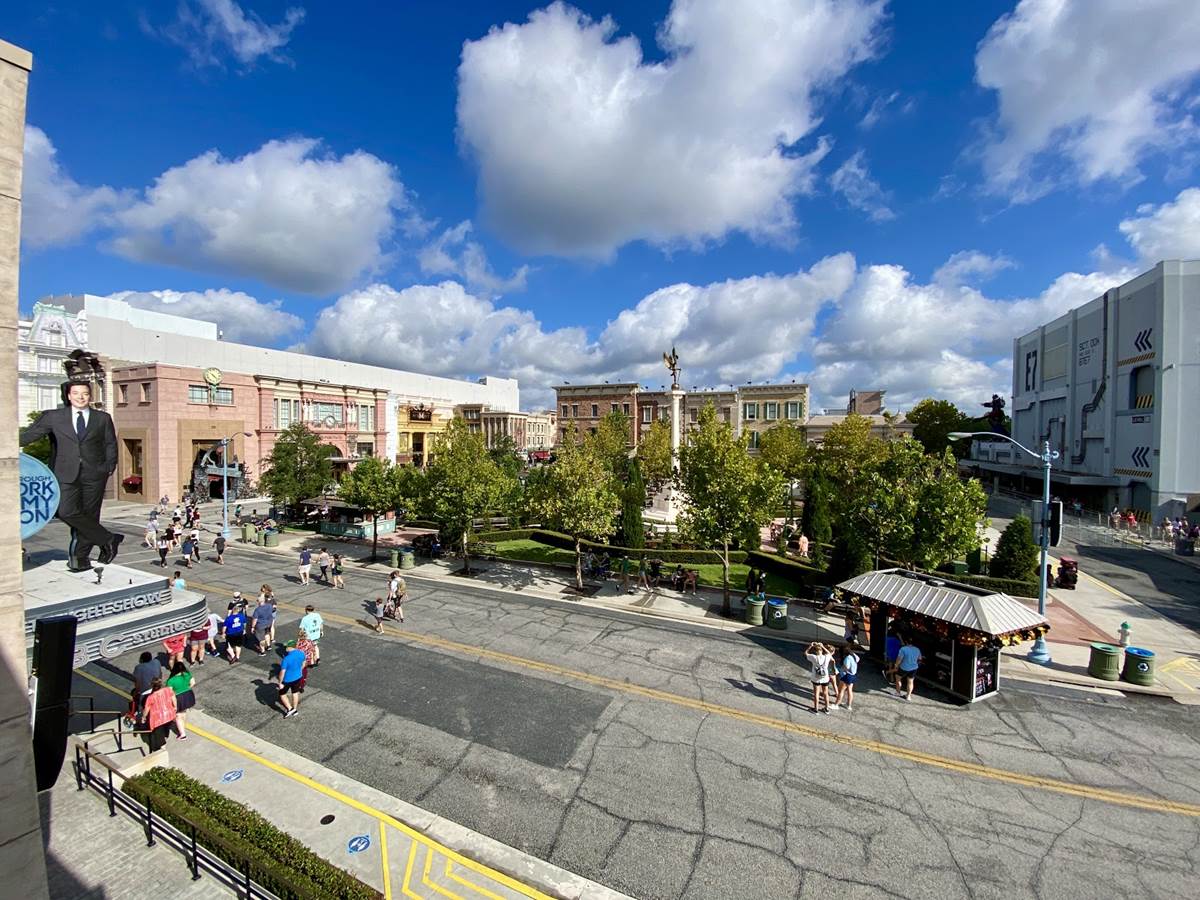 Our next stop was a nice breather: a chance to sneak a peek at the control room for Race Through New York Starring Jimmy Fallon. This was followed by one of the most beautiful views in all of Universal Studios Florida, as seen from the second floor of that attraction. While not a “thrill” part of the tour, it was nice to be able to enjoy some air conditioning and a few moments to get to know the other people on the tour as well our amazing tour guide Jacob. But no rest for the thrill seekers because, as soon as our bodies cooled down, we were off to Islands of Adventure for a snack and the biggest, greenest coaster in Orlando. The path to the other park took us through the soundstages where Jacob really shined with his knowledge of the parks and productions that have filmed on the lot. But before we could get into any trouble on the front lot, we were relaxing at Circus McGurkus Cafe Stoo-pendous waiting for our snack break. Our snack consisted of some Who Hash tots from Green Eggs & Ham Cafe and a cup of water. If I had one critique of the entire tour it would be this part. While the snack was perfect for a 2 ½ hour tour, our cup of water was very much a small cup of water. I would have enjoyed the option of a soda for a little caffeine boost, but I understand that might not work for everyone on the tour. Still, perhaps a bottle of water would have worked much better that a plastic cup with no ice. In any case, I will admit the Who Hash was really tasty. 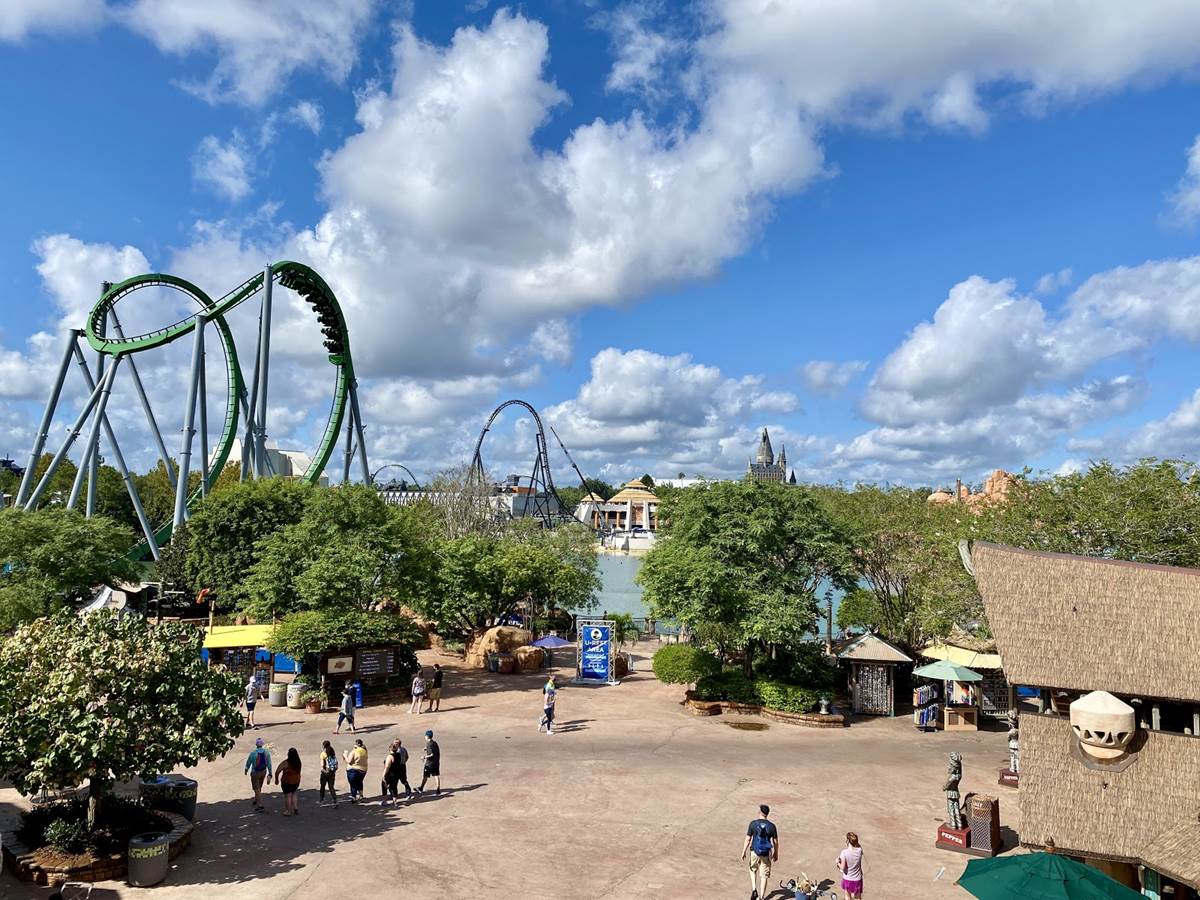 Next on the itinerary was a stop at the Annual Passholder lounge, the Navigators Club, above the Confisco Grille for a special photo op on the bridge. This was a unique experience because, as a long time park goer, I had never had the opportunity to visit this area of the park, much less be able to capture the beautiful view. But just as quickly as you could say “HULK SMASH,” we were on our way to our last destination: The Incredible Hulk Coaster. This coaster is the definition of THRILL, so it was a perfect ending to the tour. Sadly, because it is a outdoor coaster, there isn’t much “behind the scenes” to see — but, after our ride, Jacob did take us out back so see the building that houses the generator that keeps this monster from causing a brown out every time it launches. Overall, the VIP Thrills Tour was lots of fun. However, I am not sure the price equaled the value. On the other hand, the guests in my tour seemed to feel it was a great experience, so it may really depend on what you are looking for. As I said, the highlight for me was the chance to walk on ground level of Revenge of the Mummy while it was running. Also, Jacob our tour guide was very personable, had great stories about the history of the park, and just was fun to talk to. As of now, this tour is only running until the end of the month and is only available to Universal Orlando Annual Passholders. So, if you want the chance to avoid some lines and see behind the scenes of some of the attractions, reserve now at a discounted rate of $59.99 + tax (does not include admission to the parks) at the UOAP Lounge or through the VIP call center at (866) 346-9350.