Mayhem and personal drama continues on the streets of San Fransokyo, and Big Hero 6 is still finding themselves caught in the middle of it, in this the third season and fourth episode of Big Hero 6: The Series. 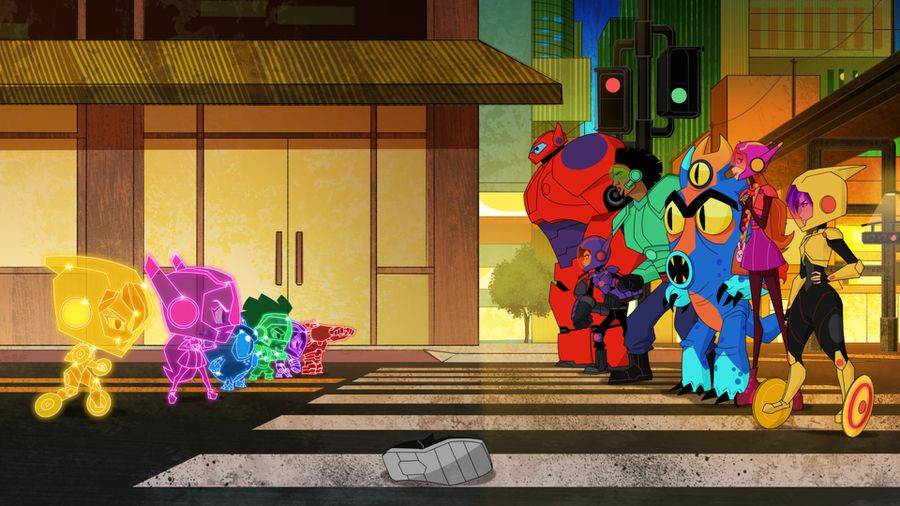 Krei is developing a self-driving, solar powered bus, but based on previous experiences with his technology, the residents of San Fransokyo are hesitant to welcome any new vehicle from Krei. The mayor knows this and refuses to buy the vehicle until Krei suggests she sees the prototype…which doesn’t exist.

Hiro (or “Intern” as Krei calls him) develops a new prototype and gives it a friendly face to welcome passengers by giving Honey Lemon an AI headset to give the bus her personality. After going around the city, the friendly, positive personality is adopted into the bus and they pick up the mayor for the ride that will hopefully sell her and the city on the new transportation.

Noodleburger Boy and his new family that he put together from other robotic mascots at the beginning of the season are lurking in the city though and want to make the new bus a part of their villainous family. Just as Krei is about to close the deal, the mascots hijack the transport that is all too positive and welcoming to the villains. Baymax, Hiro, and Honey Lemon get off the bus to make sure they regain control, leaving Krei and the mayor aboard in the process, all while Krei is still trying to close the deal while chaos ensues.

Eventually the evil mascots take the bus, along with the mayor and Krei, to the city dump where unrest grows amongst the evil mascot family. The bus, with Honey Lemon’s positive upbeat personality inadvertently unites the group together again before being welcomed into their evil clan. Noting that her personality on the bus worked too well, Hiro reprograms her AI headset so she can talk live through the bus and for the first time, has to be negative, to hopefully divide the mascot group.

After giving them a dose of pessimism, the group fights amongst themselves yet again and Hiro, Honey Lemon, and Baymax get Krei and the mayor off the bus. The mayor doesn’t sign off on the bus, and Krei orders it to be melted down for scrap, leading Honey Lemon to take it home and have a sticker party much to Go Go’s chagrin.

With 2.5 million views, Big Chibi 6 is a series by Karmi that is taking off, and she’ll be in San Fransokyo for an autograph session. While Hiro is avoiding it, denying the crush he has on Karmi, Baymax reveals that he has no plans, and finds himself in attendance with some VIP passes courtesy of Fred.

The gang is not the only one in attendance as Hardlight crashes the event with his own diabolical versions of Big Chibi 6 who are ransacking the event. Karmi promises that Big Hero 6 will defeat him, but he states that in order to beat him, Big Hero 6 must defeat themselves…the “fun size” versions.

While fighting in the street, they find the smaller versions of themselves too cute to handle and Hardlight starts distributing more versions of the tiny Hiro. Karmi shows up (complete with her own jingle) and wins over the cutie versions of Hiro by blowing digital kisses at them that she previously put into the game coding that prompts their catchprase “I’m a dreamboat!”

Programmed to protect his “girlfriend” Karmi, the cute Chibi Hiros get the gloves off of Hardlight and save the day. Karmi reunites with Hiro (unknowing that its him) and saying she can’t kiss him because she is in love with someone else (implying Hiro, obviously) and it is suggested that she tell him, which she says she will. The rest of the team delights in what just took place and its insinuated we’ll probably see more developments with this later.

You can watch this entry of Big Hero 6: The Series on the DisneyNOW app!