The adventures in San Fransokyo continue on Big Hero 6: The Series, though in the latest episode we didn’t quite get the battles and destruction we’re used to but that doesn’t mean they weren’t fun. The focus was on Fred for both parts of the episode, one story with his Butler heathcliff, and the other about his love life. 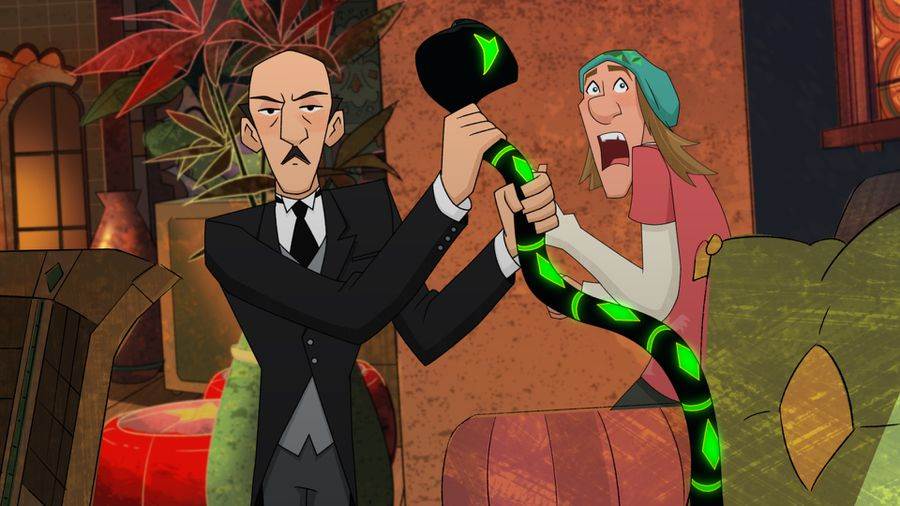 Fred is sitting at home playing video games with Hiro, about to enjoy some nachos when a cobra made of tech shows up and attacks him with a neuro-toxin that leaves him in a state of temporary paralysis. The Fredrickson family butler Heathcliff replaces his meal, and explains that the cobra was sent for him.

As Heathcliff goes into hiding, Hiro promises Fred that they’ll find him, and after reprogramming Base-Max with a little lesson in what it means to be a B.F.F., they find him at a nearby restaurant.

Fred and Mini-Max find Heathcliff at the Caviar Bazaar, where he fills them in on the extensive backstory that led him to his family. You see, Heathcliff was a spy that would constantly stop master thief Cobra (Guest Star, Kirby Howell-Baptiste (Killing Eve), becoming her adversary affectionately known as Mongoose.

In an intense encounter many years ago (though you’d never know how many, because a true gentleman always moisturizes) where Cobra wanted to cause all the volcanoes in the world to erupt at the same time, Heathcliff/Mongoose saved hero Boss Awesome (Fred’s Dad) by knocking her in to the volcano. He was then welcomed into the Fredrickson family with open arms.

As Heathcliff/Mongoose heads to face Cobra, Fred knows he must do something and can’t let Heathcliff fight alone, even though we swore on his Captain Fancy #1. Cobra learned her lesson climbing out of the volcano that it was because she worked alone that she never defeated Mongoose, and now has a surplus of tech cobras to help.

Although hindered by the cobras and his costume, Fred and Mini-Max are there to help before Hiro and Baymax show up and get the controlling headband off Cobra’s head telling her to get her own tech. Everything is powered down and Cobra is apprehended. The world is safe again, and now Fred and Heathcliff can go get some nachos! 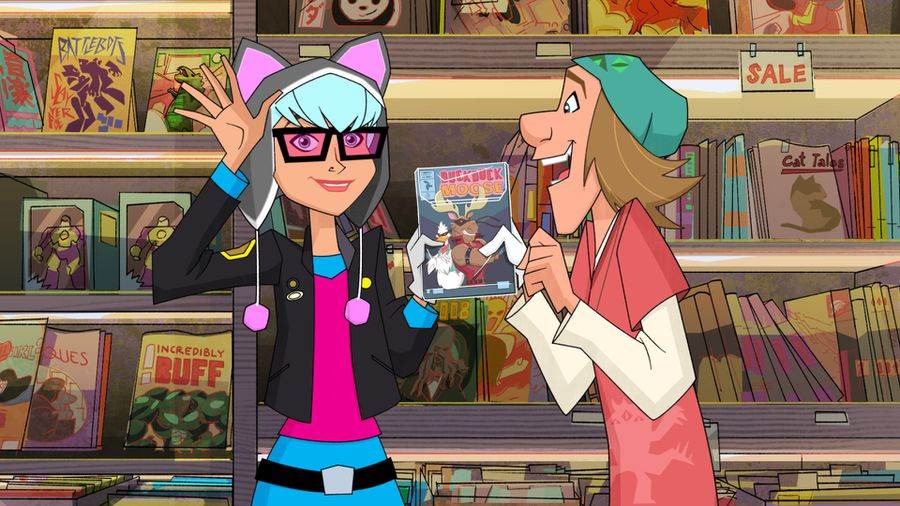 After showing up at Aunt Cass’s coffee shop in a depressive state, Fred talks about a heartbreaking incident that happened earlier that day. At the comic shop, Fred has a meet-cute with the girl of his dreams, Olivia, when they both geek-out over an issue of an obscure comic, “Duck Duck Moose.” The series has numerous little jingles, but one of the best ones comes out with a subtle song about a “nerd crush.”

Calling it “Love at first obscure reference,” Fred asks Olivia to a charity benefit that he is going to, only to find out that she is going as well, and that both of their families are involved. Olivia (Nichole Bloom (Superstore) asks what his family name is, only to be repulsed when she finds out and leaves him alone at the store.

As Fred is explaining the story, Richardson Mole pops up to explain that Olivia is his cousin, and show some laugh-out-loud worthy slow motion footage of Fred getting rejected in his store. But all seems okay as Richardson offers to give Fred a makeover to woo Olivia back to him. The gang all thinks this is a bad idea, with Honey Lemon even elaborating that nobody should change who they are for someone else.

The “Nerd Crush” jingle peppers throughout again as Fred sees Olivia at the charity benefit, only to get rejected again immediately. Turns out, Richardson planned this whole scheme just to see Fred get embarrassed again, going so far as to pay the local news to show up and make this his top story.

It seems all is lost before Supersonic Stu shows up to try his attempt at his first “solo” heist. Supersonic Sue is nearby however to advise on his progress. Fred, despite his Frederique makeover, now jumps in to save Olivia, and the rest of the gang is nearby, suited up, to help. Fred shouts for Olivia to do a move seen in an obscure reference to Duck Duck Moose, and swings in to save her and the day as law enforcement arrives as Stu and Sue leave the benefit.

Fred, Just Fred, Not Frederique learns that Richardson played both of them, as he also told Olivia that Fred was a jerk. Fred asks her to a screening of some classic kaiju anime together and even Go Go admitted that the whole thing was “kinda cute.”