Peyton’s Places is beach for a second season, and it follows the NFL great around the country as he explores the history of the National Football League, one piece at a time. The first episode of this second season is titled “Beast Quake” and it sees Peyton talk a little football with one of the greatest running backs to ever play the game – Marshawn Lynch. 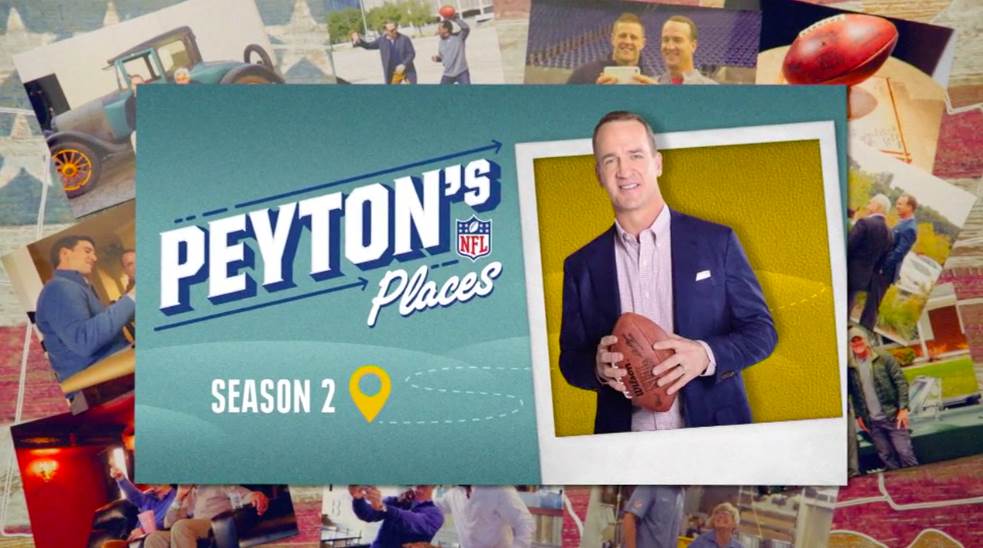 The episode opens with Peyton on the field ahead of Super Bowl LIV to celebrate being selected to the team of the NFL’s 100 all-time best players. After sharing a delightfully awkward moment with Tom Brady on the sideline, Manning introduces his son to a host of the best football players to ever do it.

After the introduction to the second season of Peyton’s Places, the episode really begins with Peyton driving a golf cart onto a high school football field, where he meets Lynch. It doesn’t take long for the first bleep as Lynch is not exactly the most family-friendly speaker. That becomes more evident as Manning shares a montage of Lynch’s career, featuring highlights of some of his post game interviews.

The first topic the two NFL legends discuss is, believe it or not, “ghost riding the whip.” One of the most memorable moments in Lynch’s career came when he played at the University of California and drove a golf cart around the field after the game. Lynch actually goes into some history of the phrase “ghost ride the whip.” It’s a funny segment and Peyton is his usual amount of awkward.

They then get into the topic of famous alums from Oakland Tech High School. In addition to Lynch and some other great athletes, Frank Oz, the legendary voice of Yoda, also graduated from the school. They also touch on the topic of Lynch’s love for Skittles, another trademark of the incredibly unique superstar. 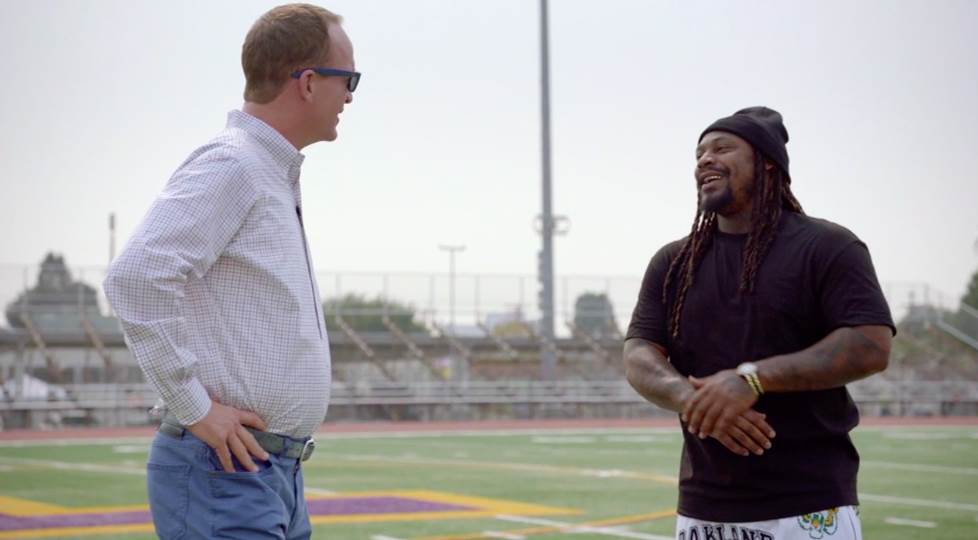 Manning of course beings up the topic of Lynch’s well-documented love for media interviews. That of course is sarcasm as Lynch was known for blowing off reporters and giving hilarious responses like “I’m just here so I don’t go fined.” Even those who don’t watch football are likely familiar with Lynch’s antics with the media. It was great to revisit some of his funniest moments, and I almost wish we got to see more of it here.

If those antics are what Lynch is known for most, a close second is his amazing ability to keep running after contact. Lynch credits this talent to the way he would play football in the street growing up. Lynch talks about how a would-be tackler has nothing on a bus, so first contact was nothing. The episode features all kinds of great highlights from Lynch’s playing career, running defenders over and making them miss.

They then get into the episode’s namesake a bit – “Beast Mode.” This was Lynch’s slogan while he was playing and it was never more evident than in his unforgettable run in the 2010 playoffs against the New Orleans Saints. Manning and Lynch break down that amazing play in what is probably the most entertaining segment for football fans. Just seeing the play again was entertaining enough, but Lynch’s insight and Manning’s commentary make it even better.

On the flip side, they also touch on Super Bowl XLIX, where Lynch’s Seahawks lost to the New England Patriots after throwing an interception in the end zone instead of giving the ball to the star running back. Lynch jokes about running backs not being allowed to be involved in the gameplanning. ESPN could make a full hour-long documentary about this one play, so it was nice that this episode touched on it a little, but football fans would still like to see more.

The episode comes to a close with Lynch once again getting behind the wheel of a golf cart and riding off into the sunset with Peyton. This was a hilarious first episode to kick off season two. Lynch might be a hard guest to top, but I’m sure Peyton has some tricks up his sleeve as this season progresses.

The first episode of the second season of Peyton’s Places is available now on ESPN+. Fans can subscribe to ESPN+ for just $4.99 a month (or $49.99 per year) and can cancel at any time.