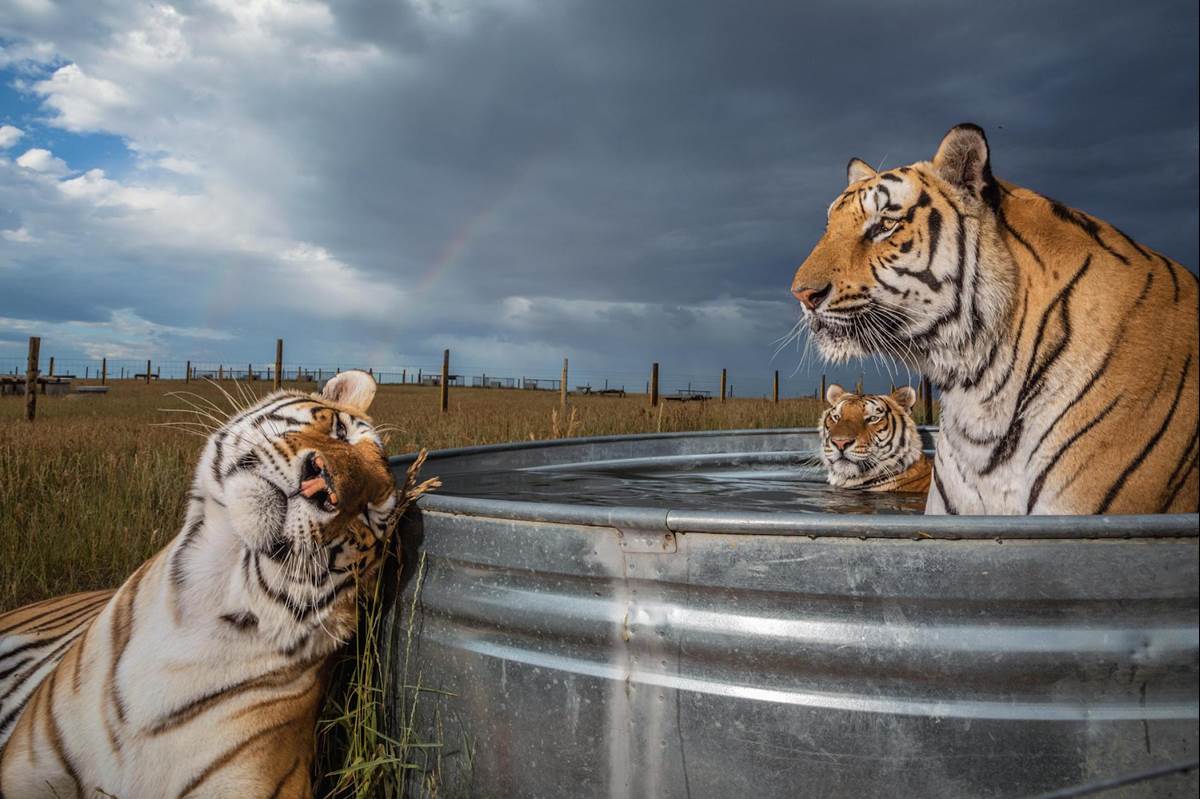 In Rudyard Kipling’s The Jungle Book, the most feared animal in the jungle is Shere Khan, a tiger. Ever since, mankind has been fascinated with the striped big cats and the desire to tame and own them is explored in this week’s episode of Overheard at National Geographic titled “The Trouble with America's Captive Tigers.” It’s an insightful look into a problem most people weren’t aware of before the Netflix series Tiger King and one that will be explored during the eight-part series Trafficked with Mariana van Zeller, which starts December 2nd on National Geographic.

Peabody and duPont Award-winning journalist Mariana van Zeller is the special guest in this week’s episode, who also hosts the investigations in the series Trafficked. This episode instantly demands your attention with a shocking fact: There are 4,000 tigers in the wild in Asia, but there are 10,000 tigers in the United States of America in captivity. How did this happen and what is life like for these captive tigers? That’s what this episode seeks to answer.

Mariana’s journey starts at Myrtle Beach Safari where Doc Antle offers lots of high priced wildlife encounters, including the chance to hold and pet a tiger cub for $500 per person. The experience has been in operation since 1983 and according to critics, the reason tigers in captivity outnumber those in the wild is due to captive breeding. Nowhere is that more true than at places like Myrtle Beach Safari where cubs are taken from their mothers early to cause them to go back into heat to have another baby. For research purposes, Mariana participated in one of these encounters, sitting in a circle with other guests as four-or-five tiger cubs were released to walk around and be pet and sit in laps.

Money from Doc Antle’s Myrtle Beach Safari reportedly goes to the Rare Species Fund to help conservation efforts. But as Mariana van Zeller reveals during her 2019 investigation, she couldn’t get a clear answer on how the money directly supports tigers in the wild. Another question that nobody was willing to answer is what happens to the cubs after they reach three-months when they become dangerous to interact with humans. They seem to disappear, which raises a lot of red flags for animal rights activists.

The podcast then takes a look at a sanctuary called Crown Ridge in Missouri where three retired tigers live under human care, but without physical contact. One of the tigers is 90% blind and manager John Madigan talks about his experience communicating with these big cats, who greet him in the morning with a chuff. Unlike a roadside zoo or attractions like Myrtle Beach Safari, tigers in a sanctuary are never touched by their caretakers and aren’t bred. Sadly, when reports come their way, they have no authority to rescue a big cat without the involvement of a PETA lawsuit or the intervention of the U.S. Department of Agriculture, but things are changing for the better.

In the wake of the success of the Netflix series Tiger King, support is growing for a Big Cat Public Safety Act that would make it illegal to own big cats. Exemptions would be made for zoos, sanctuaries, and private individuals who already own them, but it would ban private encounters like the one Mariana experienced in Myrtle Beach. Another positive effect of Tiger King is that big cat breeders are now afraid to speak up for fear of public backlash. While laws around big cat ownership are loose, there’s a movement to put more restrictions in place for the wellbeing of these animals.

Over the course of a century, we went from 100,000 tigers in the wild to less than 4,000, according to the World Wildlife Fund. Since a lot of the tigers bred in captivity have been crossbred, they are unable to be used to help restore the wild populations, but there is still hope. In Trafficked, you’ll be able to see Mariana van Zeller camp out with rangers in Thailand working to protect a wild jungle from poachers where tigers live, but are rarely seen.