Our ‘Christmas Countdown’ begins with a selection from deep within the Touchstone vault. 1988’s Christmas comedy Ernest Saves Christmas brings Jim Varney back to the screen as lovable bumkin Ernest P. Worrell. With some wit and innocence Ernest has the chance to save Christmas and restore some faith to a runaway teenager. 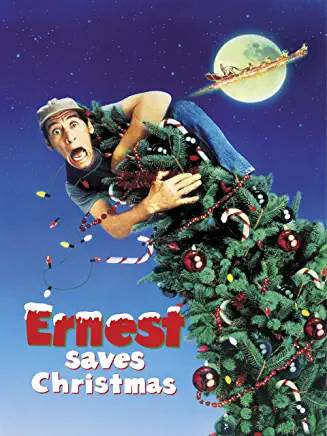 It’s December 23 and Santa (Douglas Seale) has just arrived in Orlando, Florida to recruit a new Santa Claus. After hailing a cab driven by Ernest (Jim Varney), Santa proceeds to the Children’s Museum of Orlando to meet Joe Carruthers (Oliver Clark). A runaway teenager named Harmony (Noelle Parker) hitches a ride with Ernest and Santa. After dropping Santa off at the museum, Ernest and Harmony discover they have Santa’s sack, but can’t locate him when they return to the museum.

Santa has been arrested by the police thanks to Joe’s agent.  When Ernest and Harmony learn about Santa’s predicament, they masterfully spring Father Christmas from the slammer. Ernest hatches a plan to help Santa try and convince Joe that he is perfect to take over the job. Harmony leaves with Santa’s sack, and on Christmas Eve, Santa is left sitting in front of the Children’s Museum in Orlando hoping that Joe will show up to assume his role, and Harmony will return with his magical sack.

Meanwhile, Ernest is trying to spring Santa’s sleigh and reindeer from customs, with guidance from some elves. Only minutes to the 7:00 p.m. deadline Ernest is desperately trying to fly Santa’s sleigh to the museum and save Christmas. Joe, Santa, and Harmony are all waiting for Ernest, but will they make it in time to save the day?

Jim Varney is hilarious in this delightful Christmas tale with a heart of gold. Ernest seems perfect as a cab driver which allows Varney to shine behind the wheel of the yellow cab. Unlike other Ernest films, Ernest Saves Christmas seems to be the most down to earth and cohesive story in the series. Varney’s performance is much more grounded than in previous films, and for once, it doesn’t feel like Ernest is out of place.

Douglas Seale is up there with the great performances of Santa Claus on screen. While this is a slapstick comedy of silliness led by Varney, Seale has managed to bring humanity and care to a well played role. Santa as played by Seale, is at the end of his tenure, and it is the soft moments of reflection that makes the audience connect with Santa and care for this unique portrayal of Father Christmas.

The Ernest films have always made me laugh with their silly jokes and crazy antics, but Ernest Saves Christmas is a sweet tale about the power of faith. It’s the best of all the Ernest films, and the fond memories I have from childhood when I saw this movie at the theatres haven’t changed.

There is a certain level of silliness that comes with an Ernest movie. If you aren’t a fan of Jim Varney’s character than you should skip Ernest Saves Christmas.

There is something magical about a wholesome Christmas movie. Any film that reflects on our belief in a supreme being like Santa Claus and how that belief makes us better is a great film. While Ernest Saves Christmas isn’t Citizen Kane, it is a quality Christmas movie that you can sit down and watch with your whole family. You will laugh, you might get sentimental, but you will cheer for Ernest as he tries to save Christmas.

Next week the Christmas movie season gets a little angelic help from Denzel Washington and Whitney Houston in The Preacher’s Wife.