“When hinges creak in doorless chambers and strange and frightening sounds echo through the halls… Whenever candlelights flicker where the air is deathly still, that is the time when ghosts are present.” If you’re a “Foolish mortal” who loves all 999 “Happy haunts” from The Haunted Mansion, then you’re definitely going to want to attend this séance in The Haunted Mansion: Call of the Spirits Game. Designed by Prospero Hall and released by Funko Games, players will travel through the mansion trying to collect spirits from different groupings and have more of them than anyone else by the end of the game. 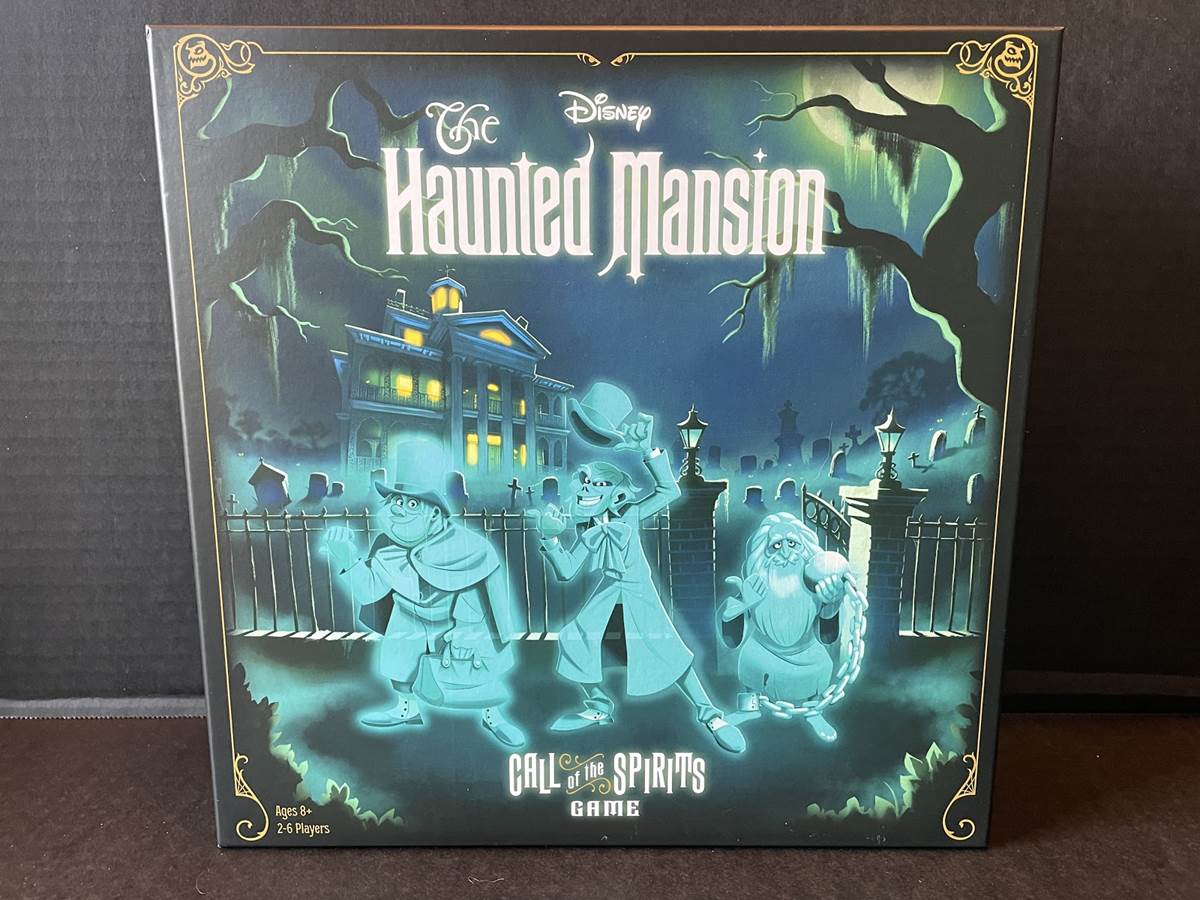 The game might come from Funko, but that doesn’t mean it looks like Funko Pop! figures. The character artwork is very faithful to the classic Disney Parks attraction and the back of the package offers a glimpse of the fun in store. A very nice touch, the underside of the lid becomes the stretching portrait room and the sides of the box are decked with portraits from the mansion’s gallery. Even the backside of the gameboard is themed. The colorful board splits the mansion into six rooms connected by a rotating endless hallway with Madame Leota’s séance room in the center. In terms of moving your pawn, players only really move between the séance room and the endless hallway. The pawns are modeled after the bat stanchions in the queue. Playable by up to 6 players, there are 6 colored pawns to chose from. During each player’s turn, they can make three actions, which are listed on a handy reference card that each player receives with their pawn. The gameplay sounds a little complicated, but it’s not really once you get the swing of things. It would be a pretty big deck of cards if there were 999, so the gamemakers have simplified it down to just 99. There are 7 types of ghosts in addition to stretching portraits and special ghosts in the deck of ghost cards. Here’s what they mean by that, starting with the stretching portraits. With 4 stretching room portraits in total, a player would need to collect 3 of each to get 15 points from the set at the end of the game. Have 1 of each of the 4 different portraits and you also get 18 points. Generally speaking, having 1 of each and several sets would be an easy way to get a lot of points. The other sets are a little easier to earn points with. The paintings and artifacts, for example, give you 3 points for just 1 card and 12 for 3 cards. But the mansion is full of tricks. If the game ends and you had just two, you wouldn’t get any points for your effort in this set. As you can see, the artwork on these cards recreates memorable moments from the attraction in a fun way. Musician Ghosts is a set through which a player could try and get all of the singing busts. The dancing ghosts pair up couples from the ballroom. The ballroom ghosts feature other characters from that famous scene. Tea party ghosts are having fun in the graveyard. 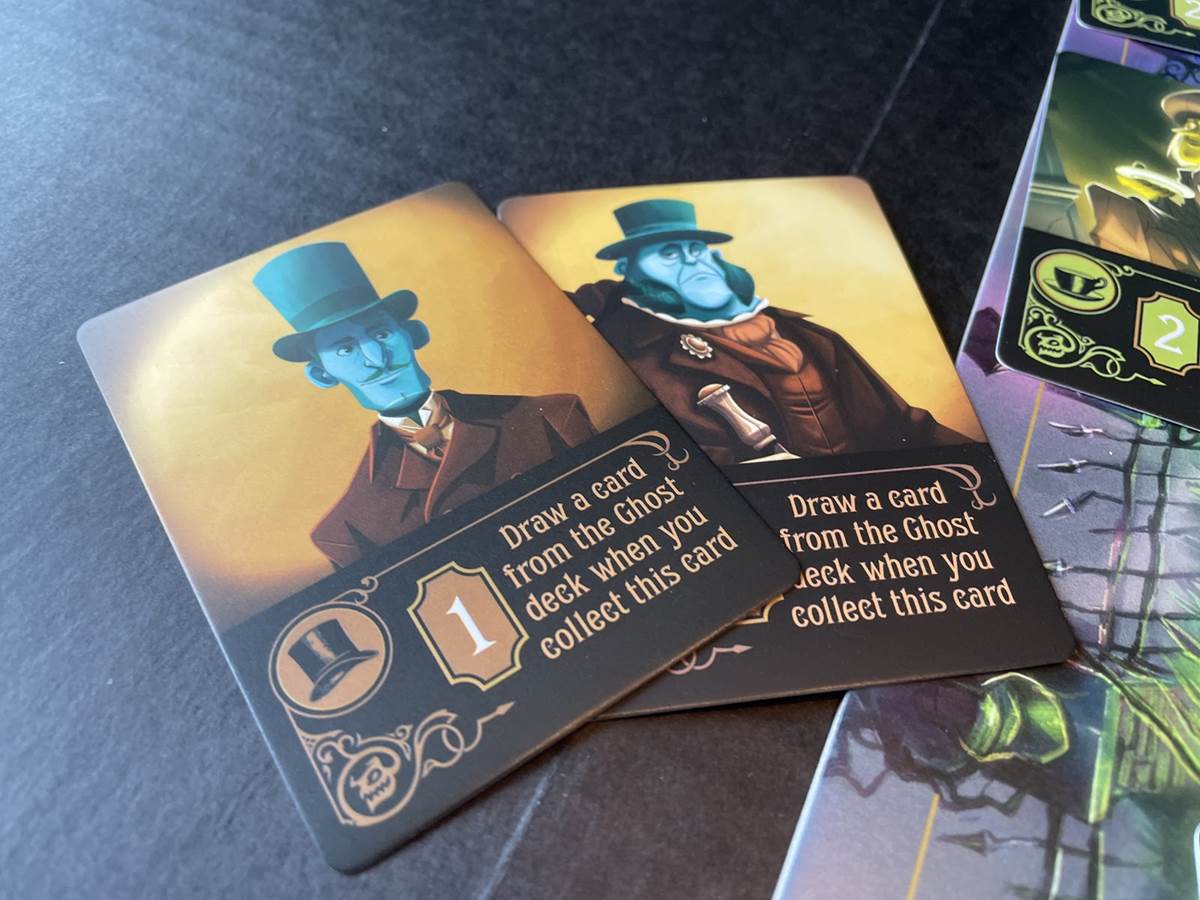 Groom ghosts have met their untimely end as a direct consequence of their marriage to the one and only Constance Hatchaway. Grim grinning ghosts are the last themed collection with a few faces you may have seen jumping out at you from behind a tombstone. Special ghosts come with extra rules for adding points at the end. In the Madame Leota card, there’s an eyeball symbol, which references the Haunt Cards. What a perfect segue! 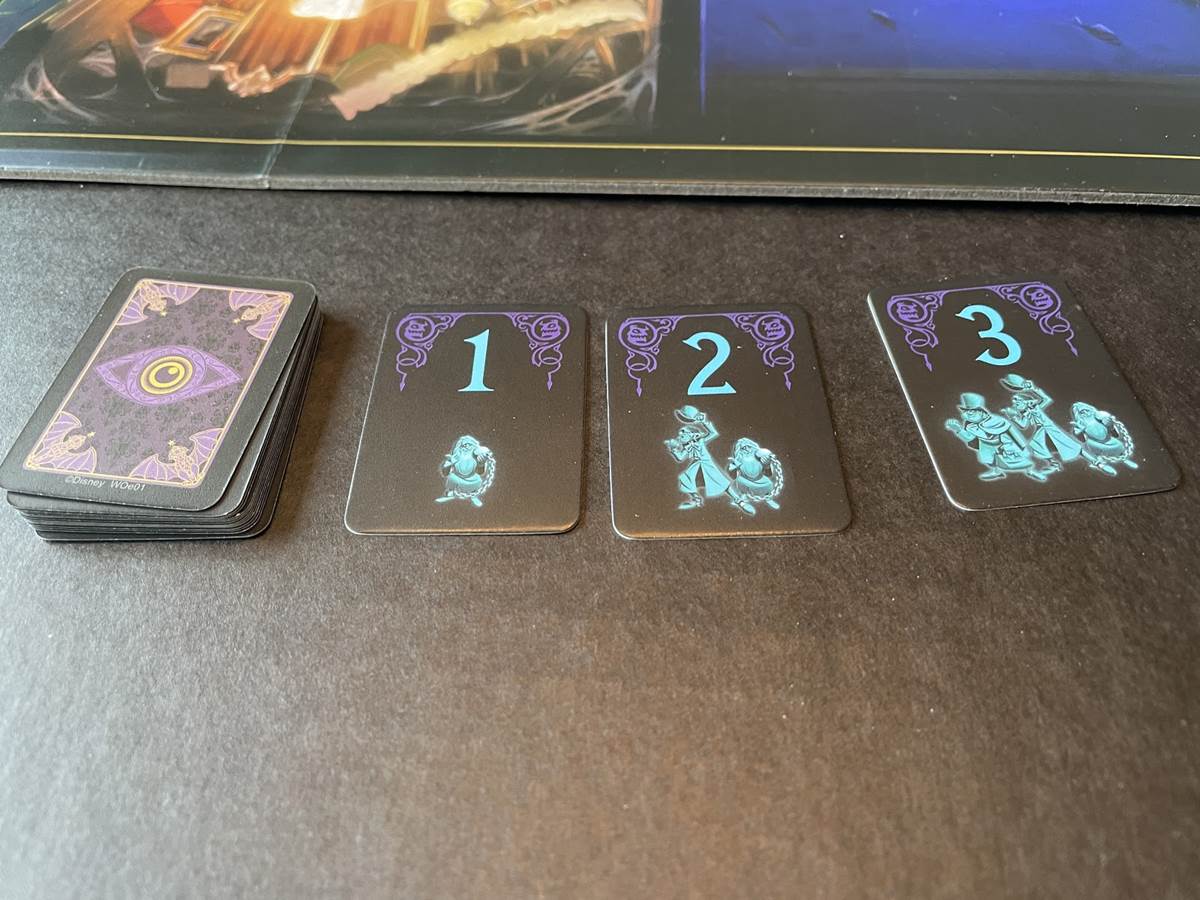 Haunt cards are bad and take away points from your final total, so you want to have little to no haunt cards by the end of the game. You receive them a variety of ways. Sometimes the instructions on a ghost card you pick up come with a requirement to draw a haunt card, or being in a room that is occupied by the hitchhiking ghosts is another way. That’s right, this game has hitchhiking ghosts, so beware! The figure travels through the board as dictated by event cards, which are drawn at the start of each round. When you’re trying to collect ghost cards from a room with the hitchhiking ghosts, you end up taking on more haunt cards. Also just stopping by their room will earn you at least one. These guys are bad news! 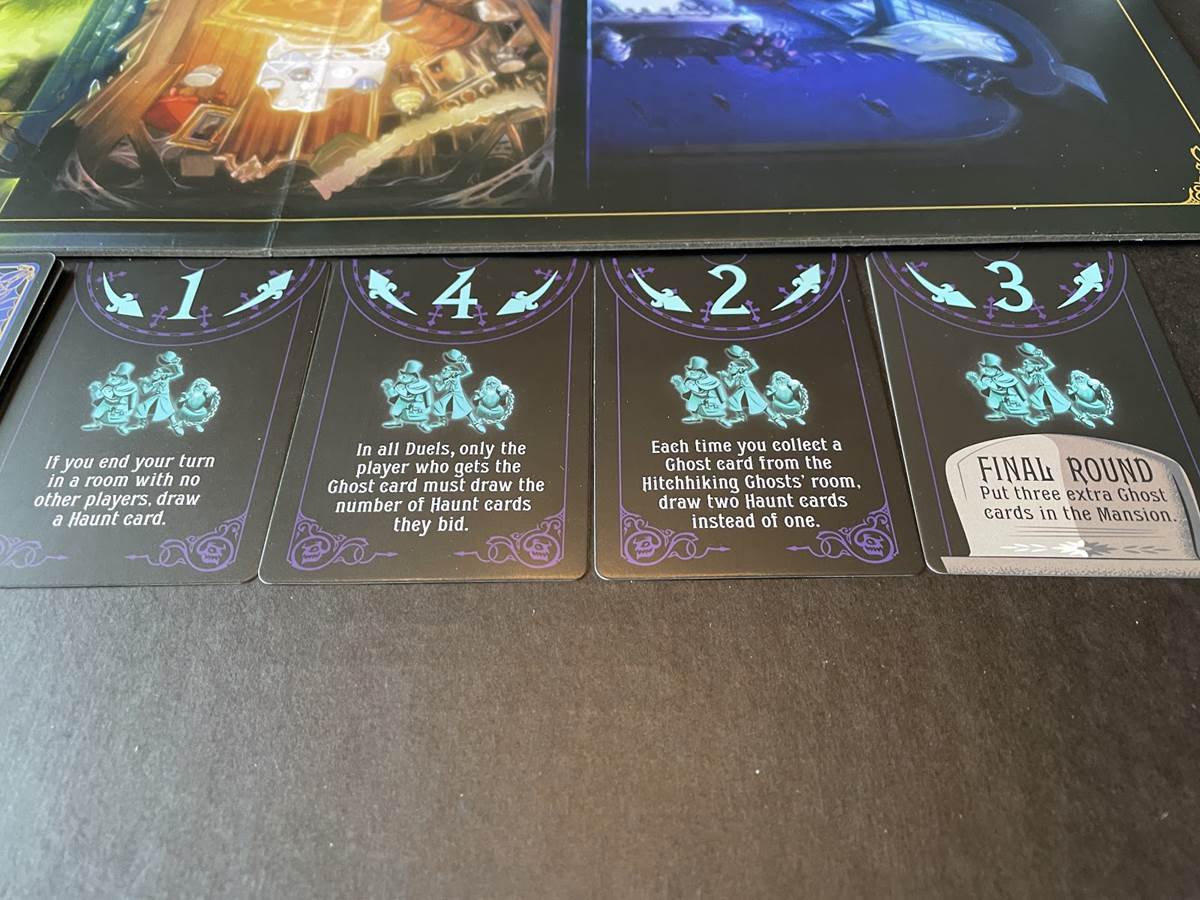 These are event cards. They tell you which way the hitchhiking ghosts move at the start of a round and which direction they go. When you set up the game, you find the “Final Round” card and shuffle it within the bottom 3 cards of the event deck, so you don’t actually know the last turn is about to come. Otherwise you’d have time to “Make final arrangements” and adjust your cards in advance of your last turn and that would just be unfair. Since each player gets to make 3 actions during their turn, a floating candelabra helps keep track of who’s turn is first on the next event. It’s not hard to remember when it’s just 2 players, but if you had a big party, this would definitely come in handy. You may have noticed one of the actions you can take in a turn is “Duel.” The way that works is if another player grabs a card you need, you could challenge them to a duel. There are two bidding dials with a rotating number between 0 and 3. Each player secretly moves the dial to the number of haunt cards they are willing to receive to take or keep possession of that card. Whoever picks the highest number wins, but in the event of a tie, the player who already had the card just keeps it. At the start of each event, ghost cards are distributed around the board starting with the room the hitchhiking ghosts are in. The number of ghost cards varies depending on how many players are in the game. It’s always the number of players +3, which is easy to remember. Then players use their turn by either staying where they are and spinning the endless hallway or moving around it until they reach the room they want to be in. Each action eats up one of your 3 allowances per event, so choose them wisely. Drawing a ghost card is considered an action, but hypothetically if you were already in a room with 3 cards, you could pick all 3 cards as your 3 actions. To recap, you’re trying to strategically collect ghost cards to get more points by the end of the game than any other player while also trying to avoid haunt cards and have the least amount of them in the end. It can feel a little overwhelming when you’re first reading through the instructions, but by the end of the first event round, everyone will feel comfortable with the game play. It’s a lot of fun for fans of Disney’s The Haunted Mansion and players will want to “Hurry back” again and again for more. 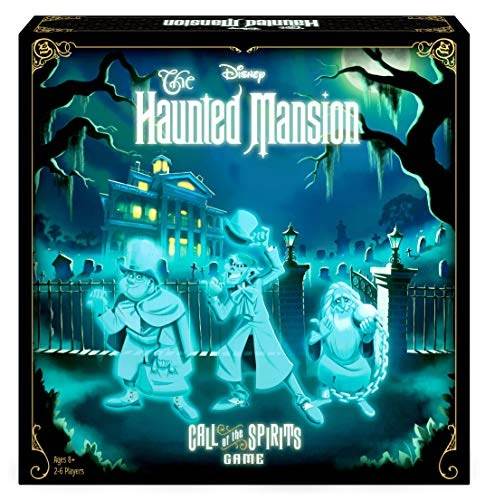 Amazon.com: Funko Disney The Haunted Mansion – Call of The Spirits Board Game