“King in Black” is still shaking the Marvel Universe and now the Black Cat is leaping into the picture. Whenever Marvel Comics puts out a major crossover story arc, there are always some smaller stories on the peripheries that intertwine into the bigger picture. That’s exactly what’s happening here.

“Black Cat #1” sees the notorious thief getting into the action as the world around her begins to crumble. Knull has arrived to end Earth. Unfortunately for him, he also interrupted Felicia Hardy’s job. While luck has been on his side up to this point, a black cat has been introduced to the story. 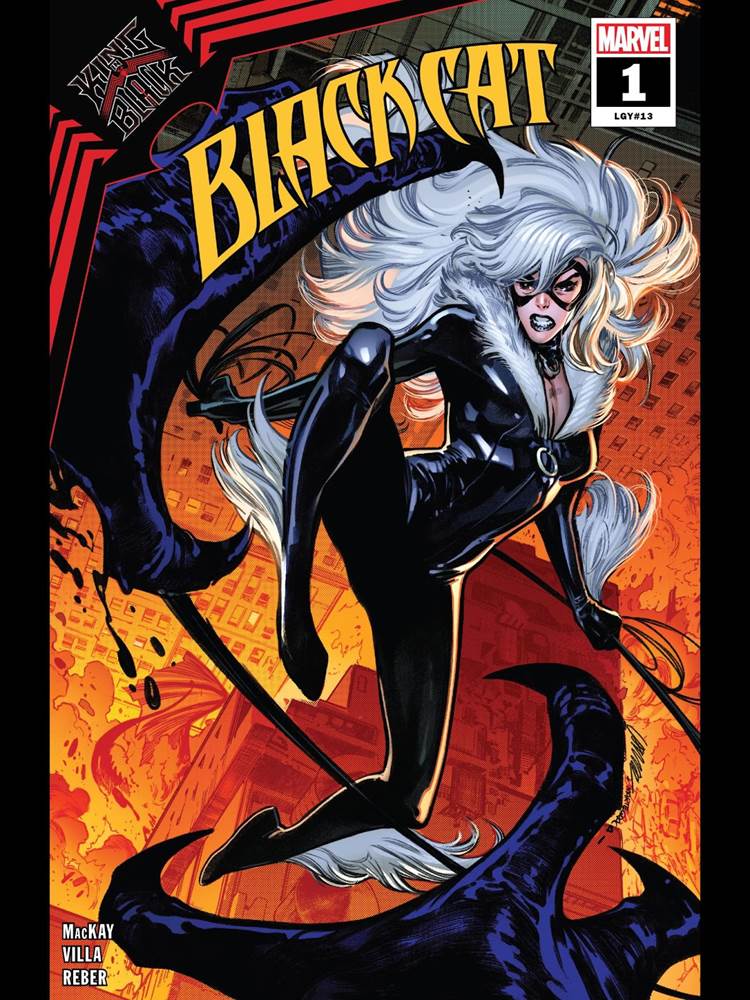 Despite and evacuation order in the city of New York, Felicia Hardy is working on her latest job. She’s hard at work at ripping off some other militant group for her own profit when her mission is interrupted by a massive symbiote dragon. Knull has arrived and now the Black Cat is aware of it.

Felicia has never been one to let things go. Just ask Peter Parker about how long she can hold a grudge. So, following her nature, Black Cat decides to join the fight. But Felicia Hardy is not a god or a cosmic entity or an all-powerful wizard. Felicia Hardy is a thief. This fight is well above her head.

After she sees heroes fall, she see what she has to do and how she can help in this fight. If heroes can’t win this battle against the god of the symbiotes, maybe a thief can. It looks like Felicia Hardy has her next job. This is one of the best tie-ins to a major crossover event Marvel has delivered in some time. It gives us that fun time jump aspect, where the focus of the tie-in enters the events of the crossover at a point we’ve already seen. We also get to see a fun team-up like Black Cat and Captain America.

This issue also introduces a very different type of story from what “King in Black” has previously been. To this point, this crossover has been an epic battle with some elements of horror. Now, it looks like there will be a heist subplot added in as well, making this story even more fun than it already was. 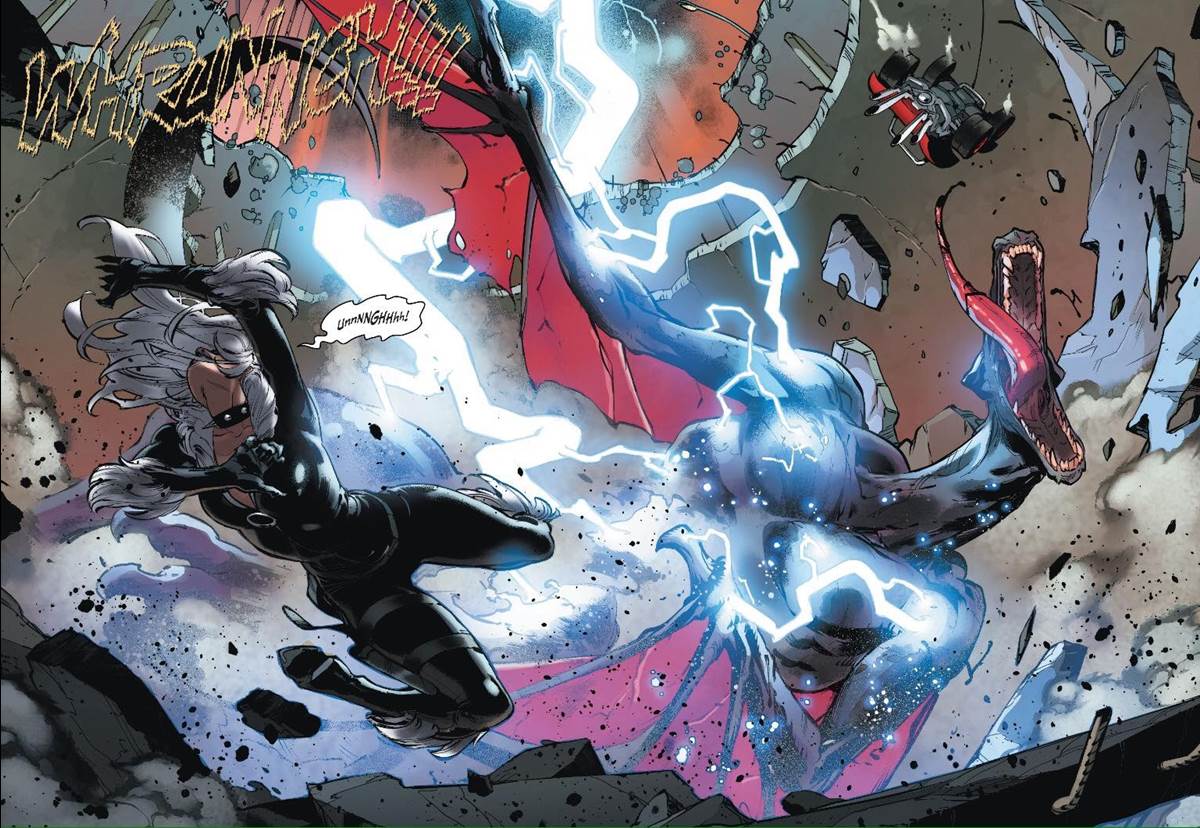 This issue also acknowledges something that so often goes unacknowledged in comics. There are very different levels to superheroes. Some are humans, with some extraordinary abilities but who still have human vulnerabilities as well. Others are gods or wizards or where essentially invincible and can take on unbelievable cosmic threats on their own. Felicia Hardy is the former and this issue makes that painfully clear.

The other great thing this issue does is provide an incredibly narrow ray of hope. To this point, “King in Black” has been completely hopeless for the heroes and therefore Earth. For the most part, things only get worse in this issue. And yet, somehow, the issue ends on sort of a hopeful note. While it may seem fun to continue burying the heroes more than any story has done before, it’s that little bit of hope that reenergizes the reader and gets them excited for the next comic. 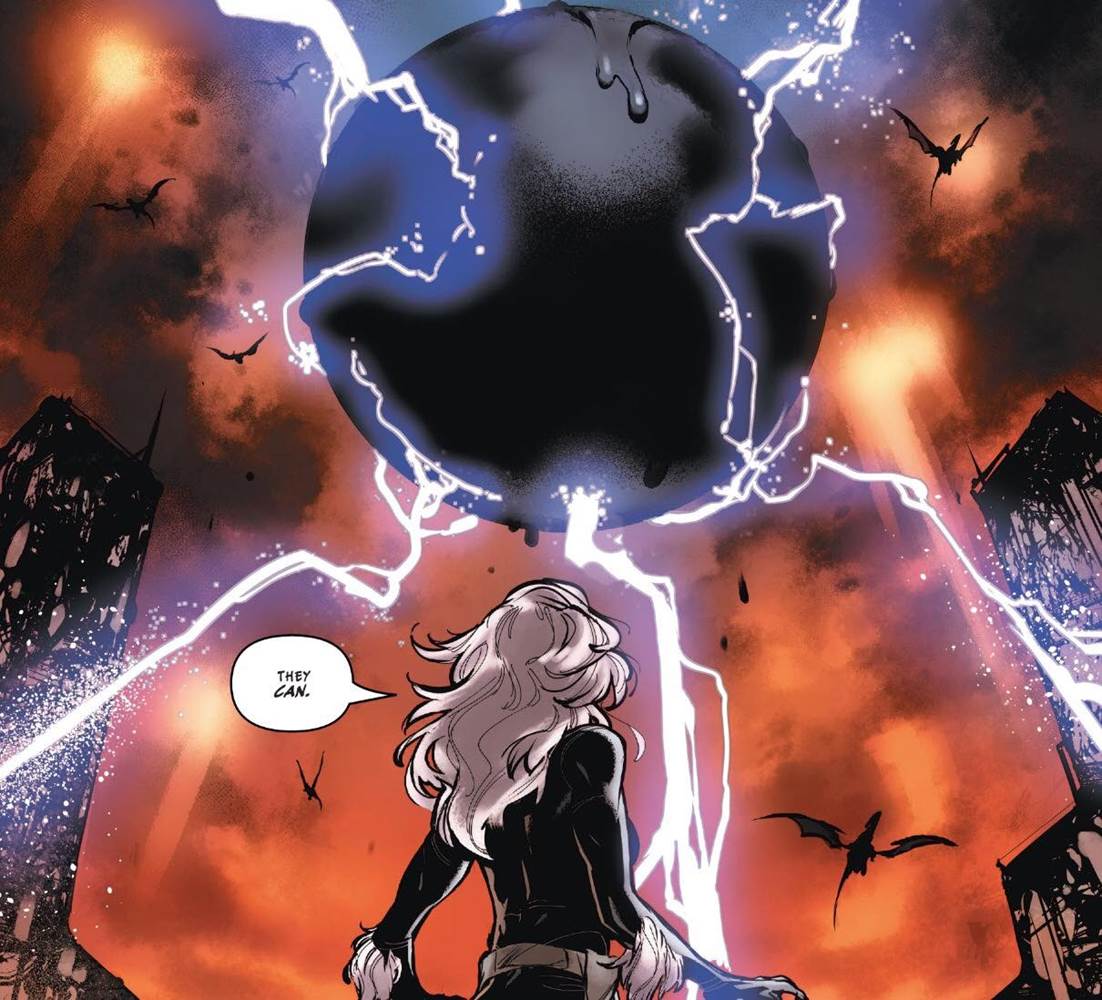