Released on November 6th, author Lou Prosperi’s third book in his Imagineering Toolbox Series, Tell Your Story The Walt Disney World Way shows readers Disney’s Magic Kingdom from a whole new angle and suggests tangible ways for all of us to make our own magic back in the real world. 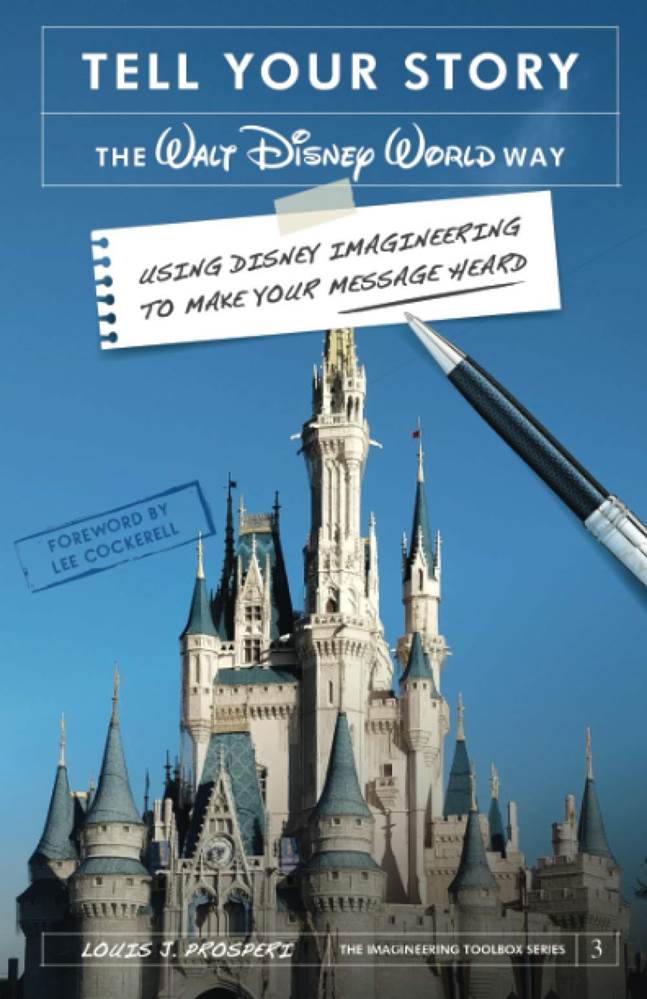 What is Tell Your Story about?

The book follows a group of friends who reconnect after many years apart and decide to go on a trip to Walt Disney World together. Judi happens to be a travel agent who books the best of the best for the trip, including a private tour. The tour is hosted by Jay, a former Imagineer, who teaches the group not just the ‘what’ behind various features and attractions around Magic Kingdom, but the ‘how’ and ‘why.’

Many of the Park’s details – considered and molded by the Imagineers to serve a specific purpose – are uncovered as Jay explains the ins and outs of some of the most iconic features of Magic Kingdom, including Main Street, Casey’s Corner, The Hall of Presidents, The Haunted Mansion and Walt Disney’s Carousel of Progress. Yes, yes, there is of course an element of wanting to go to Walt Disney World while immersed in this book, though the lessons readers come away with are as worthwhile as any Cinderella Castle sighting.

Broken down into three parts, the book first introduces us to its characters before they begin their Imagineering storytelling tour of the Magic Kingdom. Part two comprises an in-depth look at various areas and each of the lands in the Park, and part three hits home with precisely how to tell your very own story the Walt Disney World way.

So, how exactly do you tell your story the Walt Disney World way? Prosperi provides readers with a clear set of Imagineering Storytelling Tools which comprise of Imagineering Foundations, Wayfinding, Visual Communication, Making It Memorable and Walt’s Cardinal Rule. Each of these tools are explored throughout the book in the context of how they are applied to the Magic Kingdom, with the characters using the very same tools to think about their professional challenges back home and how they might more effectively tackle those challenges going forward. Possibly the coolest (and most useful) part, the author succinctly lays out these tools in different ways, via the Imagineering Pyramid and Storytelling Checklist, to ensure that no stone is left unturned in considering each step of the storytelling process.

Practical Tools Combine Work and Play in a Useful Way

I liked many things about this book, but especially part three. The practical application of Imagineering principles is something all of us should consider when working towards effective communication in personal and professional endeavors.

That said, communication was lacking in terms of visual aids in this book. Jay gives the group (and the reader) lots of directions while navigating the Park. More illustrations, maps, and/or photos would have made this aspect of the book more accessible, particularly for those readers less familiar with the Magic Kingdom and all it has to offer. Images would also serve to keep the reader engaged in the story, not just looking for the lesson. Some chapters feature a small illustration of the area of the Park to be discussed at the beginning of the chapter, however given the density of the directions that follow, more illustrations throughout would have made the story more engaging.

Tell Your Story ultimately transcends readers’ longing for their next visit to Walt Disney World or desire to uncover Hidden Mickeys around the park and instead encourages you, me and anyone else who picks up this book to consider how we all might communicate our very own stories and ideas. It is a great outside-the-box read that I would encourage Disney fans and business professionals alike to consider reading and, more importantly, applying to their own stories and ideas.