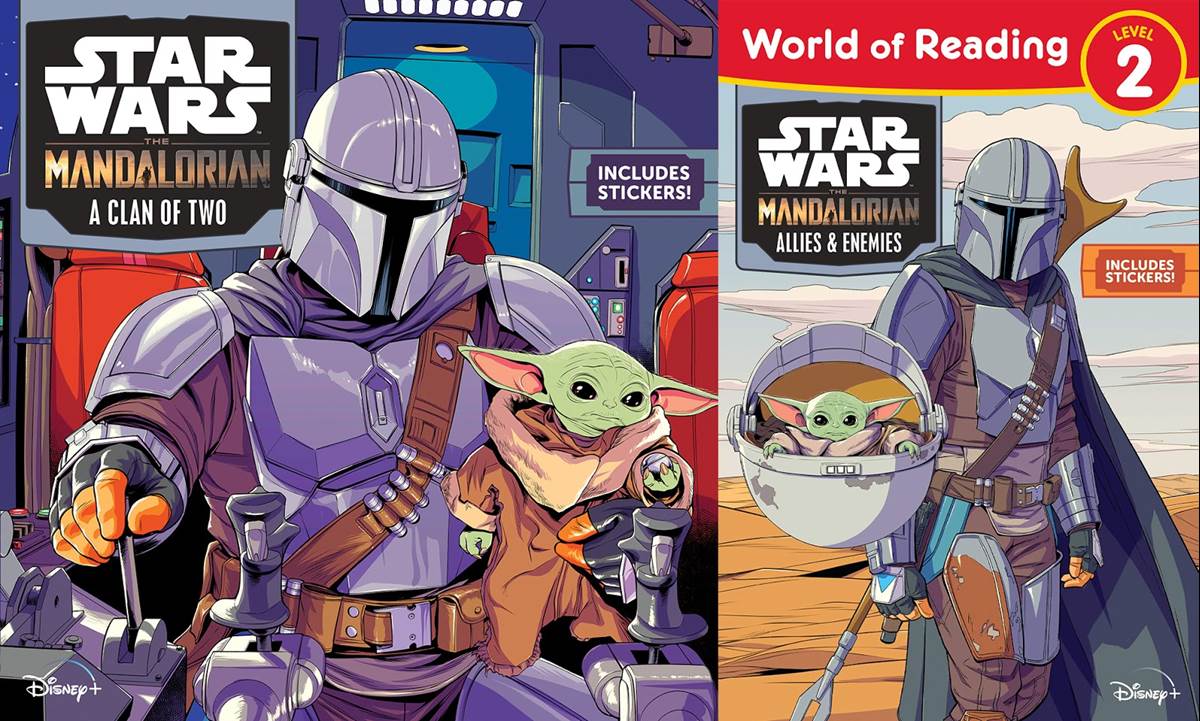 With the saturation of Grogu (AKA Baby Yoda) merchandise in the marketplace over the past year, I imagine younger kids are very curious about the smash hit live-action Disney+ Star Wars series The Mandalorian, though some of the action and themes in the show may be targeted above their current age range. But those kids’ parents need not worry about how to introduce them to the characters and events of the show any longer.

Two young-readers books (released over a month ago on December 1, in time for the 2020 holiday season) entitled Star Wars: The Mandalorian – A Clan of Two and Star Wars: The Mandalorian – Allies & Enemies are now available, and they successfully boil down the eight episodes of the series’ first season into child-friendly content with attractive, colorful artwork by the Italian TomatoFarm collective, who previously contributed to Star Wars: Galactic Adventures Storybook Collection and Star Wars: Guardians of the Whills for Lucasfilm Publishing. Star Wars: The Mandalorian – A Clan of Two is the more story-driven entry of the two, and includes two pages worth of fun stickers for kids who may want to apply depictions of Kuiil the Ugnaught or IG-11 to their lunchboxes or notebooks… do kids still use lunchboxes and notebooks? This paperback picture book follows bounty hunter Din Djarin as he travels the galaxy with young Grogu (known here only as “The Child”) across the galaxy. Mando fights bad guys, barters with Jawas, gets help from the Armorer, and faces off against Moff Gideon to protect The Child’s life and restore peace to the off-the-beaten path planets of the Outer Rim. It’s all presented with straightforward prose and charming illustrations that do a good job of getting across the gist of what The Mandalorian is all about without delving too far into the more nitty-gritty aspects of the Star Wars galaxy that children might be better off avoiding until they’re just a bit older.

Recycling some of that same artwork, but with larger, less complicated text intended for an even younger audience is the “Junior Reader” World of Reading release Star Wars: The Mandalorian – Allies & Enemies, which is intended for kids in grades 1 & 2. This book is more about getting younglings acquainted with the heroes and villains that populate the world of The Mandalorian, from Cara Dune to The Client, Greef Karga to Dr. Pershing. It also includes the same stickers you’ll find in A Clan of Two and incorporates a handful of season one moments not represented in that book. Allies & Enemies will certainly best be consumed by five or six-year-olds, but any Star Wars fan will appreciate the work author Brooke Vitale (Star Wars Rebels: Storybook Library) has done in translating this already-familiar material for a different demographic. After all, The Mandalorian is undoubtedly shaping up to be one of the foundational cornerstones of the franchise’s future, and it’s never too early to encourage kids to explore A Galaxy Far, Far Away.