An old nemesis turns over a new leaf and the Noodleburger Boy family of bots is back with a plan to find out the location of the secret base in the latest episode of Big Hero 6 The Series. 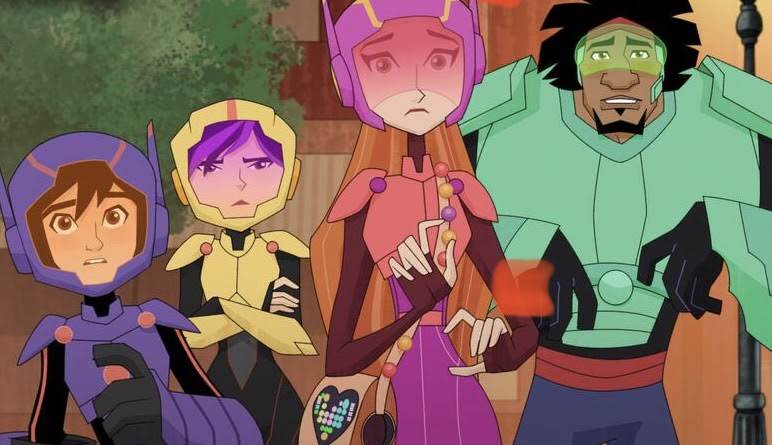 Fred is spending some time at the Pizza Party-torium when one of Big Hero 6’s many enemies, Mr. Sparkles, is spotted. Fred, after calling for assistance, and knowing they’ve previously apprehended the criminal, they keep their eyes on him while he seemingly steals a bunch of tokens.

Turns out, he was fixing the machine as he now is an employee at the party-torium, promising the gang that he has turned over a new leaf. The events involving Mr. Sparkles in previous episodes, including blasting Hiro’s cat into space, turning into a monster to attack them, and double crossing other villains of San Fransokyo are still on their mind, and the group suspects he is once again up to no good. Honey Lemon, however, disagrees with the sentiment saying that he has served his time and deserves another chance.

The gang says that Honey Lemon is too soft, and Go Go pulls out a literal list of examples of incidents where Honey Lemon has let the villain get away by being too nice.

She agrees, and says they shouldn’t trust sparkles, promising to be “a little less Honey and a lot more Lemon.”

The gang follow Sparkles (who we now know as Mr. Frank Sparkles) to catch him doing something evil, and after a series of incidents where he seems to be doing something bad, but inevitably something good, and ending up getting bored following him.

Honey Lemon still doesn’t buy it, and confronts him while he’s eating pancakes at the cafe, where Frank says he realized that the villains weren’t happy. Heroes, like Honey Lemon and the others, have friends. Honey Lemon still doesn’t buy it. She still follows him, and realizes that he’s not at work. A conveniently timed news report reveals that a priceless piece of art has been stolen, and they find Frank in a warehouse, where he tells them the whole thing is a trap. Another throwback villain, Yama (and eventually, Mega Yama) shows up to reveal that it’s his trap to fight Big Hero 6. While the battle ensues, Sparkles grabs the painting and runs away, enraging Honey Lemon and using one of her inventions turns into Bunny Lemon to fight Mega Yama. After the battle concludes (guess who wins) Honey Lemon says no matter what, she will get to Frank Sparkles….as he runs back into the building. Turns out, he took the art back to the museum.

As she realizes that she might be getting too harsh, she lets Yama run off to the “Little Yama’s room” when the group realizes he’s trying to escape.

Fred, yet again, answers a random email, this time saying that he has won a prize. To claim the prize he must go to “an office building” where he enters a room and is questioned by a vacuum cleaner/prize redemption bot that scans him and starts asking questions. Meanwhile, on the other side of the wall, Noodleburger Boy and his bot family are using this information to make a duplicate Fred-bot. Fred thinks the robot version of him is his prize and that they will go on adventures with each other, but Noodleburger Boy has a different idea.

The bots put Noodleburger’s chip into the Fred bot so he can go undercover (tee-hee tee-hee) to find the location of Big Hero 6’s secret base. Fred is flattered they chose him, but in reality, he was the only one that opened the email. The rest marked it as junk. forced to stay behind and watch the Fred bot try and infiltrate the group, he is convinced that they will all see through the ruse immediately. Fortunately for Noodleburger Boy, Baymax, who could have detected that Fred was a bot is powered down by Hiro for the next few hours. Hiro, however, is oblivious, calling his strange behavior “Classic Fred.”

A text to Wasabi and Honey Lemon grows suspicious because he properly spelled the word “Help” instead of “Halp.” Just as Noodleburger Fred Bot convinces the two to take them to the secret base, El Fuego is rampaging through the city, and the gang all show up to fight. However, every member of the team gets stuck in one of the goop explosions caused by one of their weapons, except for the Fred Bot. Only watching Fred Bot fight solo does the gang start to grow suspicious that something is wrong with Fred. Back at the “office building” where the real Fred is being kept, the bots realize that Noodleburger Boy is now in danger, and set out to rescue him while Fred plans an escape while they’re gone.

The bots arrive on scene and start fighting against El Fuego, raising eyebrows. Why would villains be fighting against villains instead of trying to take out Big Hero 6? While still trapped, the team realizes that that is definitely not Fred when the real Fred shows up, and the bots make their getaway after tying up El Fuego. Realizing their scheme is busted (or that “the customer is sending back the order”), the bots flee after retrieving the Noodleburger Boy chip.

The gang gets freed and then proclaims that they knew it wasn’t Fred….eventually…. And Fred, once again, realizes that he shouldn’t open emails without adult supervision. As Go Go so eloquently points out, “A repeat lesson.”

Big Hero 6 The Series is now available on the DisneyNOW app and DisneyXD.