Fitting alongside recent Walt Disney Animation Studios adventure films like Big Hero 6, Wreck-It Ralph and Zootopia, Raya and the Last Dragon ramps up the amount of action in a non-musical adventure fantasy film. Inspired by the cultures and folklore of Southeast Asia, Raya and the Last Dragon feels like a cross between Moana and some of Studio Ghibli’s boldest films, particularly Hayao Miyazaki’s Nausicaä of the Valley of the Wind and Princess Mononoke. At the same time, it’s uniquely Disney, full of inspiring moments and lovable characters you won’t soon forget. 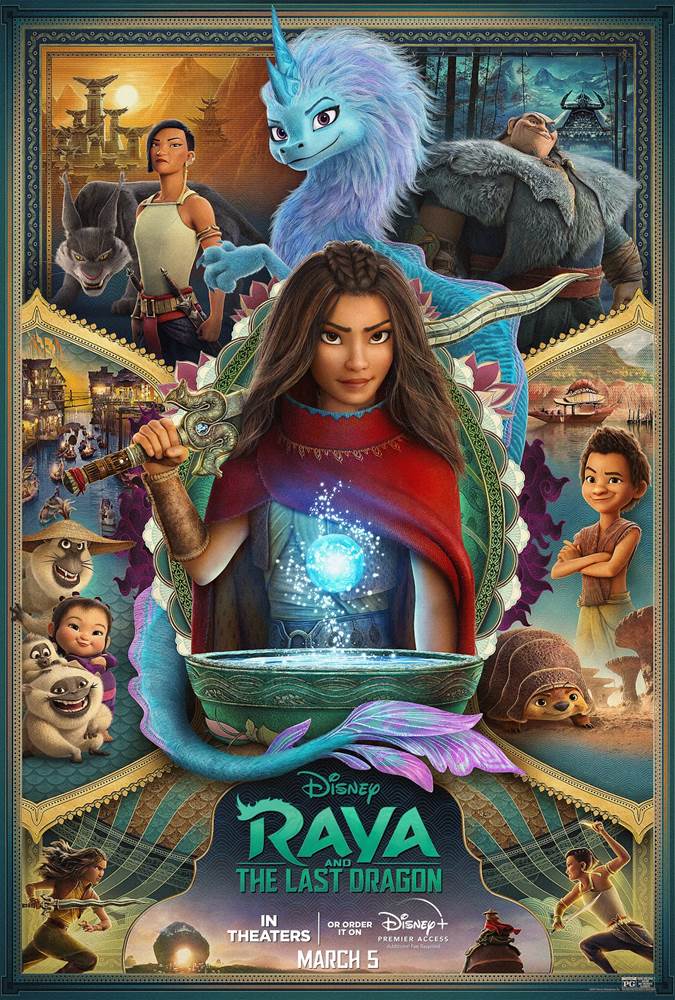 500 years ago, the kingdom of Kumandra was at peace, a magical place where dragons brought prosperity to the lands. But when humans started to fight, they unintentionally gave birth to an evil force known as the Druun that turned dragons and people into stone. In an effort to stop the Druun, the remaining dragons put all of their magic into a protective gem, sacrificing themselves in the process. Lore tells that the dragon who placed the final gem was the great and powerful Sisu (voiced by Awkwafina, Marvel’s Shang-Chi and the Legend of the Ten Rings) who disappeared immediately afterwards.

The film follows a girl named Raya, voiced by Kelly Marie Tran (Star Wars: The Last Jedi), who is the princess of the land of Heart (each land of Kumandra is named after a part of the dragon-shaped river at the center of the kingdom). Raya and her father, Chief Benja (Daniel Dae Kim, Lost), work together to protect the magical stone, but when Raya is deceived by the princess of Fang, Namaari (Gemma Chan, Marvel’s Eternals), the gem breaks and the Druun returns, leaving Raya alone as her father is turned into stone. With only a rumor that the last dragon has survived, Raya sets out to find Sisu in hopes that she can reunite the gem shards and restore peace to Kumandra.

As exciting as the prologue is, all told in flashback while Raya and her faithful companion Tuk Tuk traverse Kumandra in search of Sisu, it takes up a good chunk of the film. There’s a lot of exposition to unpack, most of it given to the audience up front. Moana delivered its exposition through a brief prologue, later learning more about the past through the character of Maui. In the case of Raya, who has lived through much of this history, the film’s first act plays a little bit like a Wikipedia entry on Kumandra, with a few gaps filled in later by Sisu.

Like Frozen 2, Raya and the Last Dragon is ultimately saved not so much by its plot, but by how it makes you feel. With mankind’s avarice having sparked the creation of the Druun and destruction of the dragon gem, the film is ultimately a story about a woman who has lost her ability to trust others. Along the way, she encounters characters that help break down her barriers leading to the ultimate test of faith. It’s a powerful message for audiences that comes at what feels like the right time, allowing the film to connect deeply with audiences in spite of a few plot holes and narrative flaws.

Co-directed by Don Hall (Big Hero 6) and Carlos López Estrada (Blindspotting), the animation impresses with state-of-the-art technology mixed with traditional hand-drawn moments. Hand-drawn animation is primarily used to visualize the mythology of dragons in the first half of the film, saving their 3D form until the audience meets Sisu. Stylistically, the dragons at times feel a bit derivative of the most recent version of Hasbro’s My Little Pony, particularly in the design of the eyes and snout. Human character designs fit right into Disney’s typical style guide, several of whom look like they were uploaded from past project. A boy named Boun bears a resemblance to the hip-hop dancing boy from Moana who became a meme and the thuggish Tong looks like Hook Hand from Tangled with just a few modifications. The design of the lands, however, really set the film apart and Kumandra ends up creating a Pandora effect where you hope that Disney will turn it into a land within one of their theme parks so you can visit it someday.

While Raya and the Last Dragon is not a musical, the score by James Newton Howard (Dinosaur) adds a lot of magic to the film. One of the most unforgettable moments comes from a blend of Howard’s score mixed with visuals of Sisu acquiring new abilities as she comes into contact with shards of the dragon gem. The score stays with you long after the credits start to roll and this score is definitely one to watch when awards season hits.

With a giant pill bug mammal creature (Tuk Tuk), a criminal baby and her band of monkey-like ongis, an orphaned boy who runs his own dinner cruise business, and a strong-silent-type guard joining Raya and Sisu’s mission, the cast of Disney’s latest animated feature is too crowded to develop most of them. The premise is also a lot more complex than the studio typically delivers, causing a few bumps along the way. But if you’re solely judging Raya and the Last Dragon on how the film makes you feel, Disney has another winner on their hands.

I give Raya and the Last Dragon 4 out of 5 shards of the dragon gem.

Raya and the Last Dragon premiers in theaters and on Disney+ with Premier Access on March 5th.