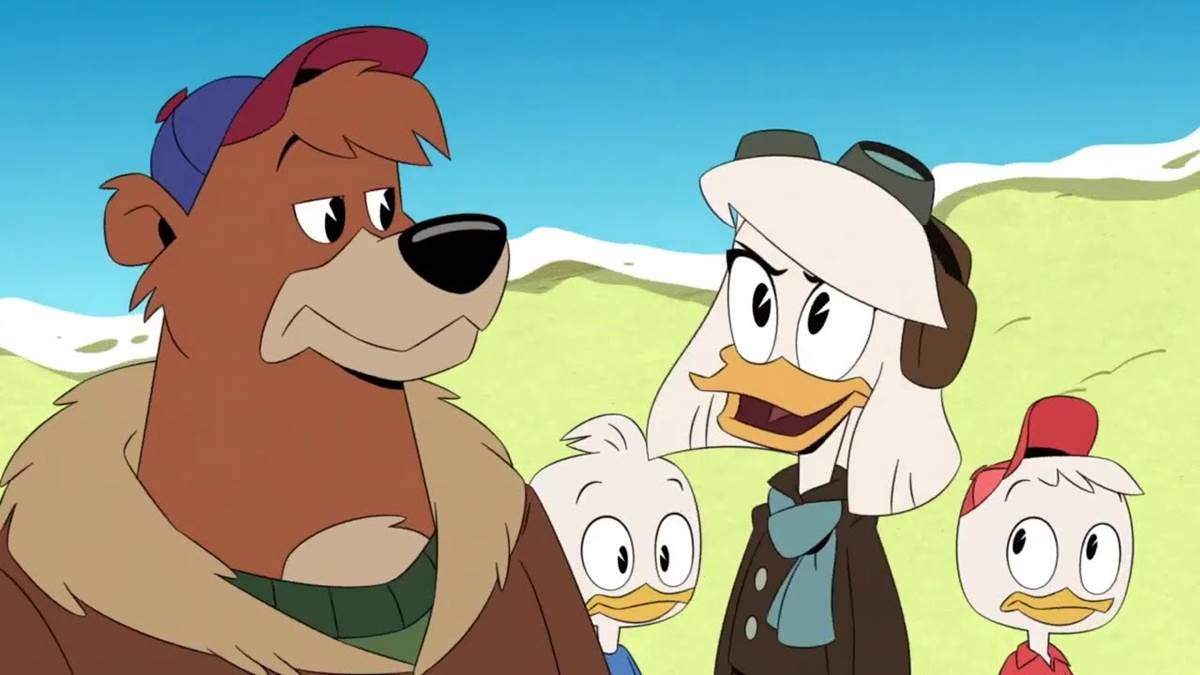 Sealing its legacy as the ultimate Disney Television Animation fan-service series, the soon-to-bid-farewell DuckTales reboot crosses over with The Disney Afternoon’s TaleSpin while simultaneously winking at Disney’s CBS-aired mid-80s cartoon The Wuzzles in its antepenultimate episode “The Lost Cargo of Kit Cloudkicker!”

While Della Duck (voiced by actress Paget Brewster) is training her showboating son Dewey (Ben Schwartz) to pilot the Sun Chaser, Huey (Danny Pudi) reveals the next of Isabella Finch’s “Missing Mysteries” he wants to pursue: The Stone of What Was, which holds the mystical power to combine two animals with each other. We see a flashback to an older Kit Cloudkicker from TaleSpin (now voiced by guest star Adam Pally of Iron Man 3) having been hired to deliver the stone in the Sea Duck– the plane that used to belong to his pal Baloo von Bruinwald. He’s attacked by the villainous TaleSpin foil Don Karnage (Jane the Virgin’s Jaime Camil)– who we’ve seen before on DuckTales as well– and accidentally drops his cargo over the ocean in the ensuing mayhem. 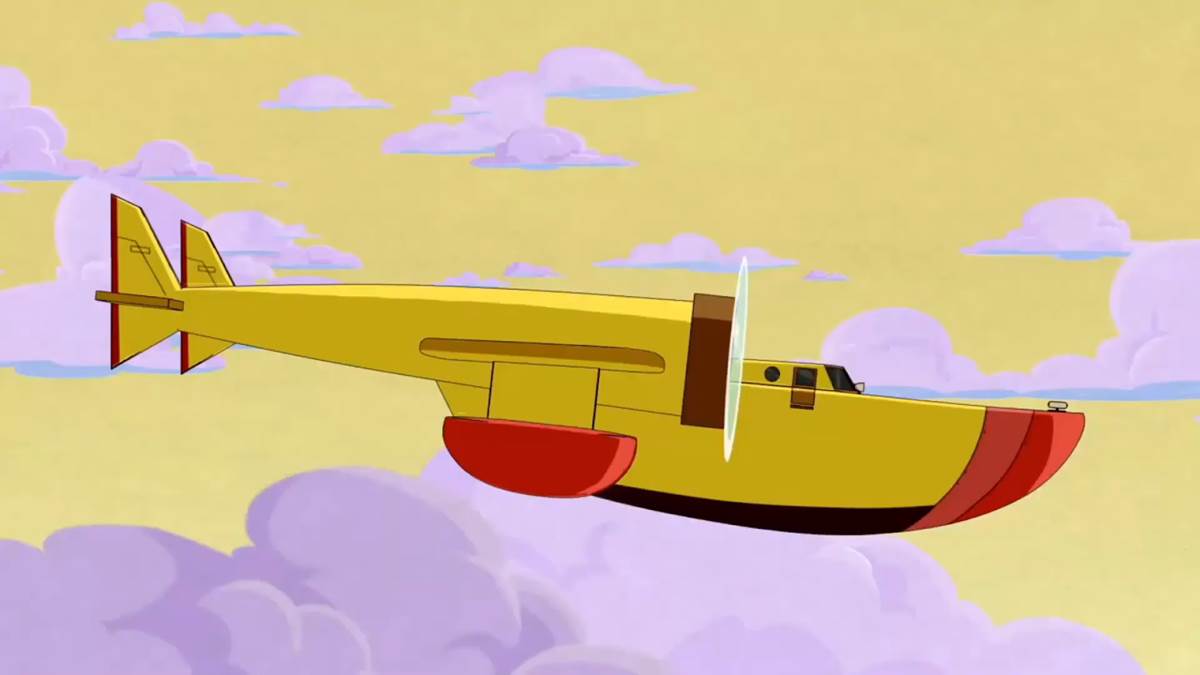 Cut to the present, where Della, Huey, and Dewey are seeking out Kit Cloudkicker in Cape Suzette and they find him to have grown up to be a bit of a slacker. Regardless, Della hires him to take her and her sons to the location where he dropped the stone, and Dewey is immediately enamored by the concept of “cloudkicking”– Kit’s ability to surf the air on the boomerang-shaped board he used frequently in TaleSpin. En route to an island Kit didn’t even realize had existed when he dumped his cargo, the gang is attacked by Don Karnage once again, who’s thrilled to find his two biggest arch-nemeses (Kit and Dewey) aboard the Sea Duck. Dewey attempts some cloudkicking of his own only to require the much more skilled assistance of Kit, and both heroes and Air Pirates soon find themselves on the island together in search of the stone. On the island, both groups must face the reality of the stone and its ability to turn both wild animals and more sentient animals into freaks of nature. Then the episode comes to a climax in a thrilling chase through the skies, with Dewey rediscovering his love of flying the old-fashioned way (in a particularly hilarious turn of events, he must keep the plane perfectly steady and level in order to save the day as an otherwise exciting action sequence unfolds around him). And of course “The Lost Cargo of Kit Cloudkicker!” ends with Don Karnage defeated once again (though he vows his revenge as he recovers a fragment of the Stone of What Was) and– SPOILER ALERT– Kit is reunited with his TaleSpin friend Molly Cunningham (Adam Pally’s Happy Endings costar Eliza Coupe). There’s a very The Nightmare Before Christmas-esque lesson here to stick with what you’re best at, and it’s nice to see Dewey finally settle on a more realistic passion than his usual flights of fancy. 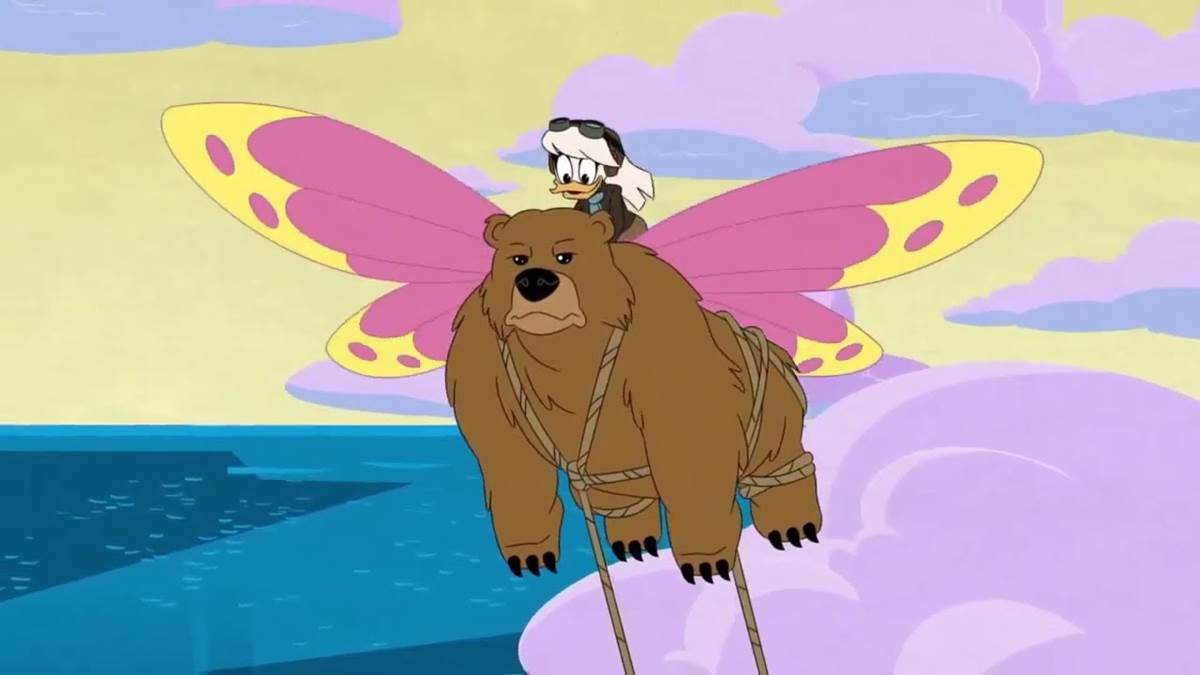 “The Lost Cargo of Kit Cloudkicker!” is going to be most appreciated by viewers who grew up as fans of TaleSpin and the littler-seen The Wuzzles, but it’s cool to see showrunners Matt Youngberg and Frank Angones get this (perhaps final?) bit of Disney interconnectedness out of their system as this iteration of DuckTales nears its end. Plus as usual there’s enough fun action and chuckle-worthy humor here to ensure everyone else to enjoy this episode as well. With just two more installments to go (including the super-sized 90-minute finale coming up on March 15th), this show is certainly going to go out with a bang, and I personally can’t wait to see how they bring the whole thing to a close. 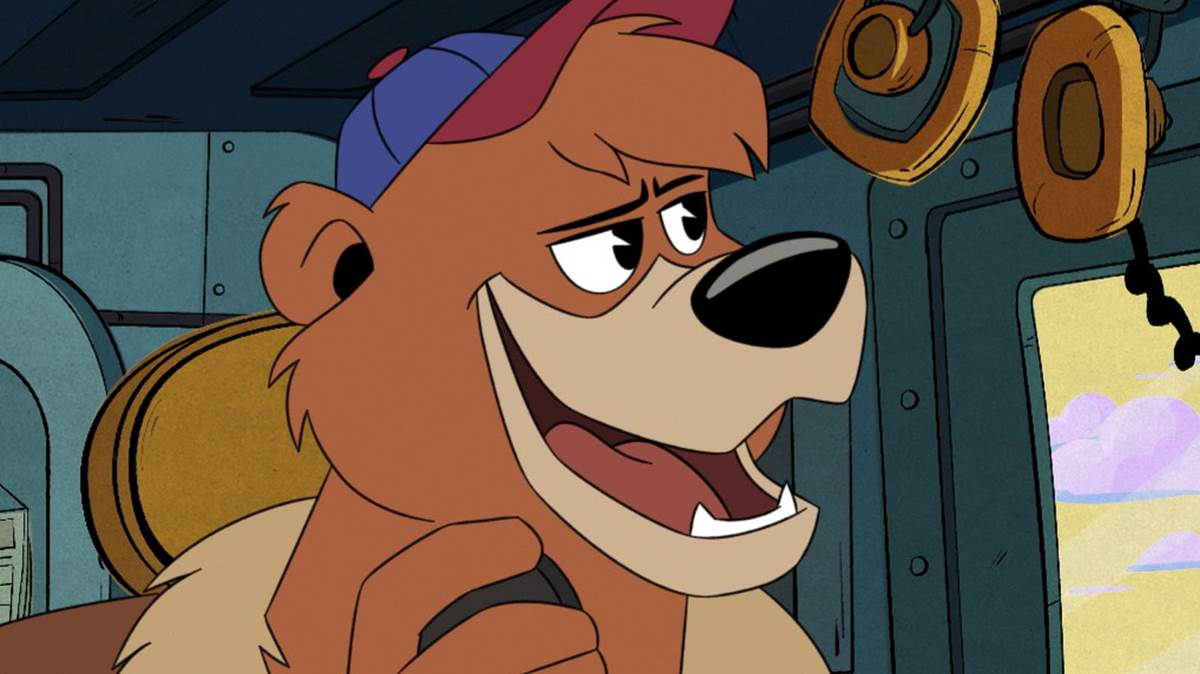 The two remaining episodes of DuckTales will air over the next two Mondays on Disney XD.