TV Recap: “Secrets of Sulphur Springs” – Episode 10: “No Time Like The Present”

The numbers on the radio in the bunker have been set to match the ones that automatically appear on the matching radion in The Tremont’s secret room. That’s where the last episode of Secrets of Sulphur Springs ended and fans can dive deeper into the story with today’s new episode, “No Time Like the Present.” It’s now streaming on DisneyNow and airs tonight (March 5th) on Disney Channel. Here’s a recap of the tenth episode. 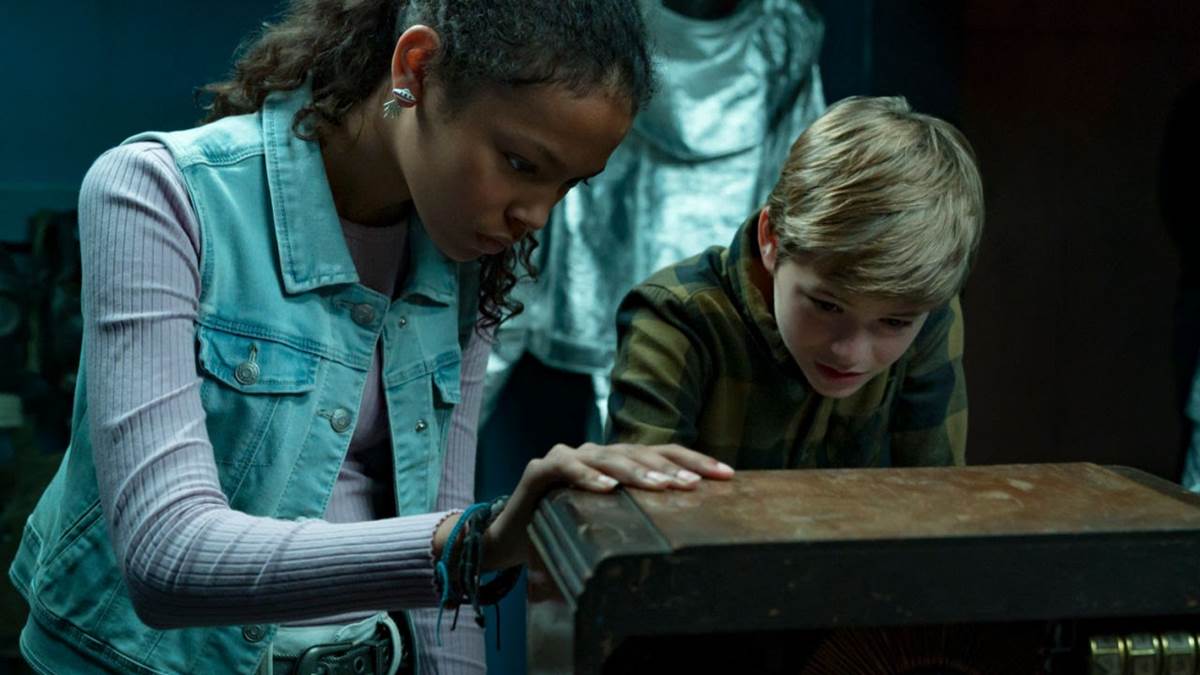 With the numbers matching, a button on the front of the radio pops out. Pushing it opens up a panel to reveal a dial with 4 roman numeral numbers. Griffin knows how to read Roman Numerals and sets the dial to 1962. Nothing happens so Harper hits her hand on the top and suddenly the lights in the bunker flicker. As she and Griffin head down the hallway to the hatch, we see that there are lots of old Edison light bulbs inside.

Upstairs, Ben calls his dad, telling him that it was a mistake that they moved to Sulphur Springs and sharing that they’ll be moving back. Sarah watches him as he agrees to go back to work at his dad’s firm. Ben sounds defeated as he says “You were right, dad. You always are.”

Topher is reading a book on the front porch when Jess comes out with the shoebox full of old photos, preparing to put them away again in the garage. She offers to look through them with Topher when he sounds sad about it and asks her about a photo that shows him as a baby with Harper and their dad in a yellow GTO. Jess says that car was his dad’s baby before they had kids and confirms that it’s what he was driving when he had the accident that killed him, sharing that he crashed near The Tremont.

Back in 1962, Griffin and Harper are delighted by the groovy clothing styles and retro cars until the bellman refuses to let Harper enter The Tremont due to the color of her skin. Griffin has an eye-opening moment, realizing that all the bellmen are Black but all the guests at the hotel are white. “This is what it was like and not even that long ago,” Harper explains to Griffin as he processes the racism he’s seeing. Savannah finds them, interrupting the moment. She’s been adopted and her mom runs The Tremont, with Savannah helping out. 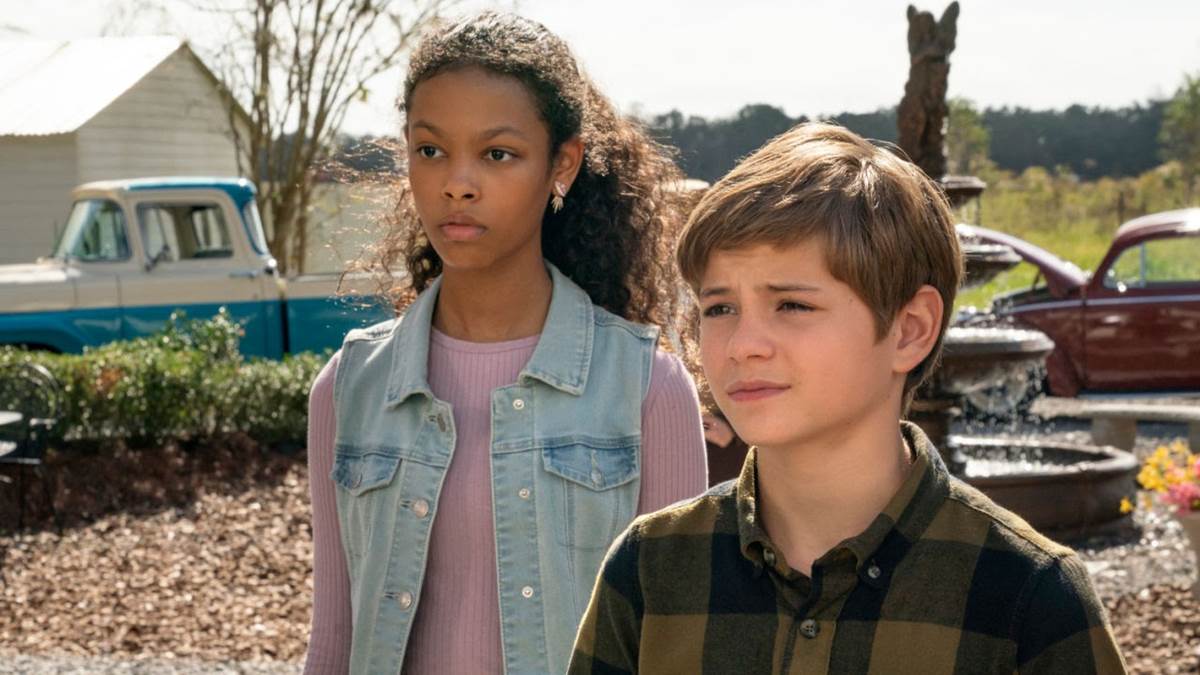 At the treehouse, which was built just for Savannah, she explains that when the tree fell on the hatch, she went back to The Tremont for safety from the storm and Carolyn found her, adopting her officially a month ago. Griffin and Harper come clean, not only about their real names but also that they are Ben and Jess’ kids from 2020. They ask Savannah to come to the future with them just to prove that she’s okay and then she can come back to 1962, but she is worried that another accident like the tree falling will prevent her from getting back to her adopted family. As Savannah heads back to The Tremont, she turns around and tells them she has an idea.

In the present, Wyatt and Zoey have found that the 12 cold spots they mapped inside The Tremont are no longer cold. Zoey suggests that Savannah’s ghost might be happy they’re moving and have calmed down. Downstairs, Ben and Sarah are packing up moving boxes when Wyatt and Zoey come down to tell them about the cold spots. Sarah tells them the hotel was never haunted to begin with. “That was a mistake,” she tells them, justifying the writing on the mirror as a hallucination caused by stress. She takes them to the porch to pack up their stuff as Harper runs in, telling Ben that she and Griffin tried to climb into the decrepit treehouse and that Griffin fell.

When Harber and Ben get to the tree, Griffin stands up and says he’s fine, he just had the wind knocked out of him. Then Ben notices a paint can underneath some of the broken beams of wood and walks to it, opening it up and finding a letter. He looks shocked as he says “I know what happened to Savannah.” Harper and Griffin look at each other knowingly.

In the lobby of The Tremont, Jess is present as Ben reads the letter aloud from Savannah where she explains that she ran away to find her family. Jess questions if the letter is really from Savannah, but Ben says he found it in the old coffee can that they used at camp to pass messages to each other. Jess apologizes for blaming Ben for Savannah’s disappearance. “She’s out there in the world just living her life,” Ben says, finally seeming relaxed.

As Harper leaves, she and Griffin have a bonding moment because Griffin called her his best friend when talking to Savannah. At the Dunn Cafe, Jess tells Harper that she forgot about the treehouse, revealing that she wasn’t invited inside and confessing to having been somewhat of a mean girl at camp. Harper then poses a question to her mom, asking if she ever thinks about if she would do anything differently if she could go back in time and stop her husband from getting in his car accident. Jess tells Harper it would be the best thing ever if she could.

Before going to bed, Harper and Griffin video call each other and Griffin tells her he’s thinking of destroying the radio so nobody else can abuse time travel. Harper agrees that it’s a good idea, but tells him they should sleep on it and talk in the morning. As she hangs up, we see that she’s holding a drawing of her and her dad at a lake. 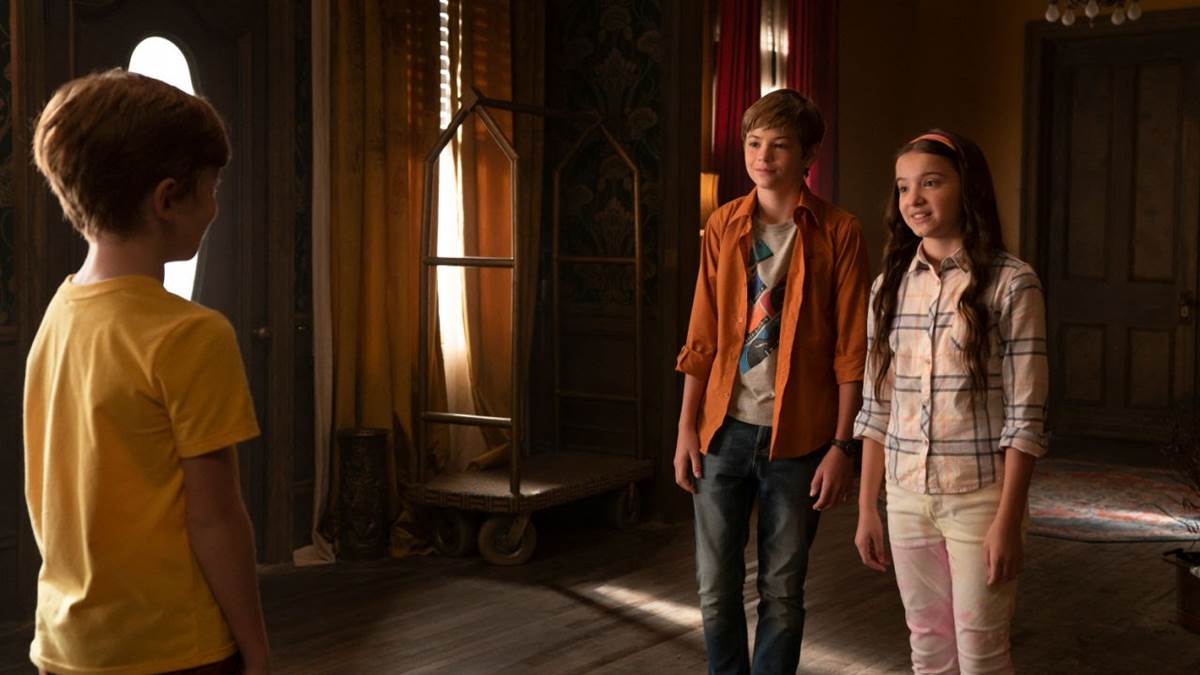 Sarah meets Ben with tea late at night at The Tremont, suggesting that they stay and cancel their plans to move back to Chicago. She confesses to having heard Ben’s call with his dad and knows he sounded unhappy. Since the kids love it there, too, she says she wants to stay. They agree to surprise the kids in the morning.

Jess finds Harper heading out early, assuming she’s heading to the cemetery to visit her dad’s grave. She offers to give Harper a ride, who declines but says she will say hi for her mom.

Griffin comes downstairs to find his parents unpacking boxes, hugging his dad with his excitement that they can stay. He runs upstairs to call Harper and we see that she has snuck into the basement and changed the settings on the radio. The lights flicker and she runs off as Griffin is unable to reach her and leave a voice message saying he has great news. Wyatt and Zoey run in with their excitement and Ben joins them with his guitar, asking Griffin if he wants to jam. As Wyatt and Zoey head downstairs to get some banana waffles from their mom, they pass an empty room with a rocking chair. Zooming in, we see the chair start to rock.

Harper is back in 2011 standing alongside Bayou Road and when she sees a yellow GTO coming, she jumps into the road waving for the car to stop. The driver looks a lot like Topher and asks if she needs some help.

That’s the end of the episode, but we once again get a few clips from next week’s exciting continuation. Wyatt sees the chair rocking by itself and tells Zoey about it while Griffin follows some ghostly footsteps down the hallways. Savannah surprises Griffin in the basement, appearing to have come to the present. Another foggy mirror with writing is seen, this time with the word “No.” With Savannah present, Griffin finds Harper outside and tells her that he saw the dial on the radio was set to 2011, the year her dad died. In the car with her dad, we see Harper telling him not to take Bayou Road, but then an oncoming truck swerves into their lane.

Here’s the official description of the next episode, titled “Time After Time.”

“Harper travels back in time to the date her father died in hopes of trying to change the outcome.”

If Savannah isn’t haunting The Tremont, who is? Could it be Harper’s dad? Will she be able to stop his car from crashing? We’ll find out next week when Secrets of Sulphur Springs returns for its season finale.