Today’s adventures in Big City take us to the community center where Cricket has increased his vocabulary (not for the better) and to the Farmer’s Market, where the Green family must do whatever they can to save their vegetable stand. 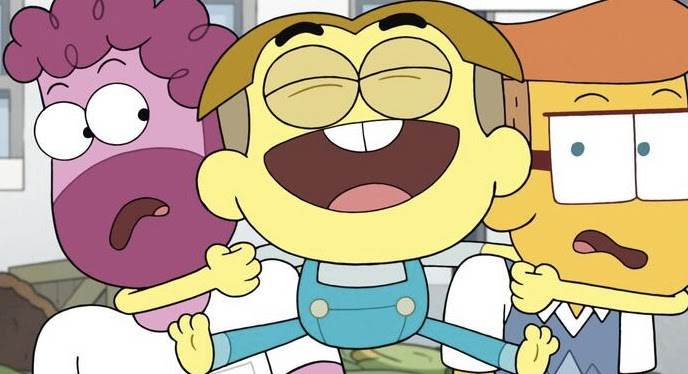 Bleeped – I’ve really come to enjoy Big City Greens because it has a lot of smartly written, sometimes layered humor and sight gags that I tend to forget that the target audience for the program is children. That said, this is not one of those episodes. Sure, it’s amusing but definitely skews far younger than some of the others in the catalogue.

Cricket, Tilly, and Remy are getting ready to perform at the community center choir recital when they go to Gramma, looking for a throat lozenge.

Gramma is visibly annoyed to be setting up the chairs for the recital and, unaware of the kid’s approach, lets out a cuss word. Don’t worry parents, it’s a cuss word exclusive to the world of Big City Greens, “Blort.”

Cricket, squealing with delight over the new word in his vocabulary shares the word with Remy, and the pair begin to say the word repeatedly, getting the whole community center choir group involved in their fun.

Cricket is pulled aside and his dad is called. Bill shows up, knowing that this day would eventually come. He forbids Cricket from ever cussing again, to which Cricket rebels and runs around the office screaming the word.

Bill teams up with Officer Keys to lecture the kids about cuss words, with Keys employing some of the “Can’t You Speak Sweetly? (C.U.S.S.)” Program, which inevitably backfires because Keys plays the children music featuring all kinds of cuss words, explaining to Bill that the children need to know the words in order to avoid them. The kids start chanting all the words, prompting Bill to go “Full Dad,” and scaring the kids straight easily.

Bill realizes as the choir is about to perform that everything went a little TOO easily. Borrowing Gramma’s binoculars, Bill reads Cricket’s lips as he’s explaining to Remy his plan to scream the cuss words at the end of the song. He then sneaks behind the stage and pulls Cricket down to try to stop him. After a chase where it’s revealed that Cricket is prepared for anything, wearing two sets of overalls, Bill finally accepts he won’t be able to control his son all the time, and has to trust Cricket to do the right thing.

The performance is in progress and Cricket rejoins, fully intending to shout the words at the end, but in doing so, inadvertently knocks everyone down so he is the only one left standing, center stage with all eyes on him. He makes eye contact with his dad, and ultimately decides not to say the words.

Tilly, who throughout the episode has been trying to perfect her high note, succeeds in doing so, with animals all over the city coming to applaud her performance in windows of the community center.

The Green’s vegetable stand is going broke. Bill tries to keep his cool while he explains this to his family, but is having a hard time doing so. He says they need to sell all the fruits and vegetables today. The family is working together, and even Gloria offers to help, even though Bill forgot she lives there. Bill thanks her for the offer, but says she can just stay home and relax.

Gloria knows that if they’re this desperate they must need help, so she tries to help out anyway she can, and takes them up on the suggestion of feeding the chickens while they go to the Farmer’s Market.

Every family member has a different approach on how to save the vegetable stand. Cricket takes the notion of a “Publicity Stunt” a little too literally, and sets up a contraption that definitely garners attention, including exploding bath bombs that will go off when he lands in the water.

Gramma is going around harassing everyone eating fried foods and hot dogs explaining she didn’t eat enough vegetables and they should, since she looks that old at only age 25.

Tilly had the most frightening plan, making a personal connection with each customer…by making direct eye contact and not breaking it until a sale has been made.

Meanwhile, back at the house, Gloria is attempting to feed the chickens (a banana) and one gets loose. She finally catches the chicken on the roof, thinks it actually looks cool, and posts a picture of it on her social media before realizing she left the door open on the coop, inadvertently letting ALL the chickens out. She chases them down the street where they are boarding a bus, prompting the question, “Do chickens understand bus travel?”

The chickens end up at the farmers market, much to Gloria’s chagrin, as that’s where the Greens are, thus proving her lack of being able to handle the simplest of tasks.

As the Greens attempts each fail individually, Gloria apologizes and explains that she just wanted to help before realizing her chicken picture was going viral. Turns out, the Green family farm isn’t on social media, so after some quick lessons and advice from Gloria, the vegetable stand starts trending (Gramma becomes an influencer thanks to the number sign!) and people come from all over Big City and Medium City too, buying up all of the Green’s vegetables.

The latest episode of Big City Greens is now available on the DisneyNOW app and the Disney Channel.