Touchstone and Beyond: A History of Disney’s “Quiz Show”

Robert Redford’s 1994 Quiz Show had all the ingredients for awards season. Based on a true story, a committee/courtroom scene, idealistic characters getting to the bottom of a scandal, and a fallen hero trying to set the record straight. Based on the quiz show scandals of the 1950s, which rocked America with the revelation of cheating by network executives and contestants, Quiz Show would be nominated for multiple Oscars including Best Picture, Best Director, and Best Supporting Actor. 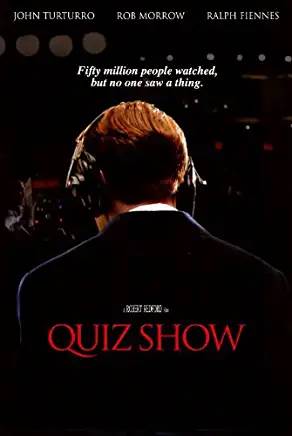 Twenty-One is one of the biggest quiz shows in America. It’s the 1950s and America turns to their television to watch reigning Twenty-One champion Herbert Stempel (John Turturro) rack up victories by showing a mastery of multiple quiz show questions. Stempel has kept the ratings big, but the network executives are not sure how long the champ can keep people glued to the television sets. A challenger is needed.

Enter Charles Van Doren (Ralph Fiennes) the son of prominent professor Mark Van Doren (Paul Scofield). Charles is young, single, an instructor at his father’s college, and the perfect champion for the show. Told to take a dive on a simple question that Herbert knows, Van Doren is now the toast of America.

While Charles gains fame, money, and an appearance on Time magazine, Herbert is cast adrift by network executives Dan Enright and Albert Freedman (David Paymer and Hank Azaria). Stempel pleads his case to the New York District Attorney and the resulting grand jury investigation brings in Dick Goodwin (Rob Morrow) from Washington DC. As an investigator for the House Oversight Committee, Goodwin dives into the world of Twenty- One and it’s contestants.

While Stempel comes across as a fame obsessed maniac, Goodwin sees a kindred spirit in Van Doren. They bond over their educational backgrounds and when the committee calls for testimony by the executives and contestants, Van Doren is left off the docket. Through the insistence of his wife Sandra (Mira Sorvino) and Van Doren’s own actions, Goodwin is forced to call Charles to testify.

As the national champion comes clean about his role in the scandal, the lives of the television executives will go on, while the role model of America is forced into his own personal exile.

Paul Scofield is so talented and skilled with his role as Mark Van Doren. He plays the father role to Ralph Fiennes will love and compassion and a hint of disconnect that only makes his scenes with Fiennes even more enjoyable. The role of Mark Van Doren is a small part of the larger story and could be easily thrown away and forgotten depending on who is in the role. Scofield makes the most of his scenes and turns a small role into a pivotal role for the film. The look Scofield gives Mark as he learns about Charles losing his teaching position is tragic, and a sign of the talent that Paul Scofield could bring to the role.

I feel like we shouldn’t like Charles Van Doren. He’s a complicated man who hasn’t found his place in the world and struggles to establish himself outside the shadow of his father and mother. Charles has everything, and yet that doesn't make him happy. He starts his run on Twenty-One unwilling to cheat but gets caught up in the whirlwind of success and goes along with the charade. The audience really shouldn’t like him, but thanks to Ralph Fiennes’ performance, he makes the audience have empathy for Charles. We want Charles to be successful and get away with the cheating, even though we shouldn’t.

When Doren testifies before the House Oversight Committee, the final statement by one of the members is perfect and picks up on the dislike for Van Doren’s actions. While everyone has commended him for his reflective statement, the final member states that no one should be commending him for finally doing the right thing and telling the truth. The eruption of applause by the audience who only minutes ago admired Van Doren tells you how fast public opinion can change.

Rob Morrow’s thick Brookline accent is distracting. Throughout the film the accent becomes so thick it’s hard to pay attention to his character and the role he plays in uncovering the fraud.

Mira Sorvino deserved a much bigger role in the film. When she is on screen, Sorvino is powerful and reminds us what a talented actor can do with minimal screen time and dialogue. It’s a shame she didn’t have more screen time. I really enjoyed watching Sorvino confront Morrow’s character and held him accountable for worshipping Van Doren.

While the fraud conducted by the executives and contestants is wrong, I didn’t find the story to be compelling. The sense of trust was broken by the revelation of the cheating, there was no real crime that resulted in people getting hurt. The payoff is anticlimactic. By the time the film ended, I cared little for the consequences of the committee hearings because the audience knows that the people who perpetrated the fraud for the network would receive no real punishment.

The premise of Quiz Show is interesting, but the execution of the story leaves a lot to be desired. Other films have taken on topics that aren’t as thrilling and made better films. Quiz Show suffers because the audience doesn’t connect with the characters. Paul Scofield is the standout, and Mira Sorvino should have had a bigger role. Quiz Show would be better suited in the limited series category of today which would give the audience time to really appreciate and see how the scandal paved the way for media manipulation of today.

Next week journey back to 1990 and Julia Roberts Golden Globe winning and Oscar nominated role in Pretty Woman.