This week’s new episode of The Simpsons is momentous for a number of reasons, not least of which because Albert Brooks returns as a guest star for the first time in five years. His history with the show goes all the way back to the first season and in “Yokel Hero,” he plays a character with a distinct name like so many on the show, “Slick Manager.” It’s not just the 14th episode of the 32nd season, but it’s also episode 698 total. That means we should be expecting a 700th episode spectacular in about two weeks. In the words of Homer Simpson, “WOO HOO!’ 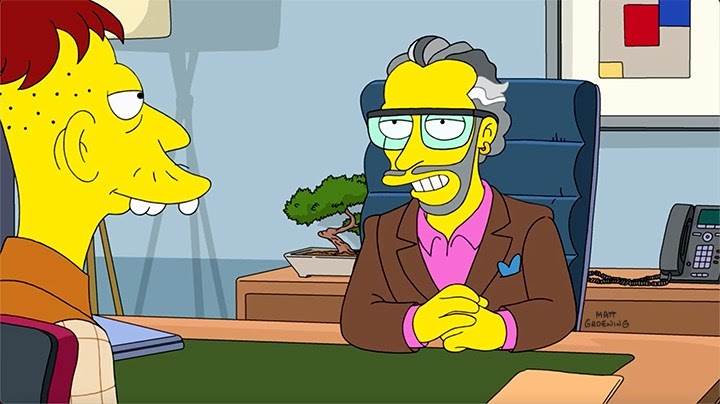 It’s Carl’s birthday and all of his friends are drunkenly celebrating at Moe’s Tavern, with Lenny finishing the song “Happy Birthday” with “And Lenny more!” Homer gets a call from Marge who’s worried he will drive home drunk. As a result, Homer gives Moe his keys, who goes to the backroom and tells a man at a machine “Make me two sets of these and get ‘em to me by closing time.” A board on the wall has several keys identified which include Burns’ Vault, Lenny’s House, Carl’s House, Barney’s Panic Room, Krabappel’s Diary, Hibbert’s Drug Cabinet and an elusive mystery key.

Outside, Moe calls an Uber for Homer and Barney pulls up. “Are you Homer?,” the clearly drunk driver asks. Moe tells him he's better off walking. Barney gets into the backseat and tells the empty driver’s seat to take him to Moe’s, surprised that he got there so fast and giving himself five stars.

On his way home, Homer walks through downtown Springfield singing a parody of “Singin’ in the Rain.” He passes Kirk Van Houten busking on a peer before getting arrested by a cop he’s never seen before. “We have other cops in town?,” he asks surprised.

Oh Homer, what have you gotten yourself into now?

Inside the prison, Homer calls Marge on a phone that features “El Barto” graffitied above it. Sharing a cell with Cletus, who’s doing time for moonshine, the yokel borrows an acoustic guitar to sing an original song and Homer finds himself touched. Borrowing a reflection mirror, he says “I’ve gotta be a better man for Marge and Grandpa and the kids and the dog.” Cletus looks up from the moonshine still he just erected over the toilet. “Don’t you have a cat?,” he asks. “Screw the cat,” Homer replies.

Returning home, Homer keeps his promise to be a new man, waking up the kids to confess to having spent the night in jail. “I’m a new, better man thanks to Cletus,” he tells them after making them join him in a prayer circle. The end, roll credits.

“We ain’t done, we got two more acts and a whittled by credit,” Cletus interrupts in a “That’s All Folks” circle, getting his credit before the commercial break. “Whittled by Cletus Spuckler.”

Homer wakes up the next morning to Marge, who’s eager to see if he remembers his promise from the prior day. “I remembered I’m a better man,” he replies to her question. As he looks out the window, he says “Where the hell’s my car?,” after bragging about not forgetting important things. Cut to Moe driving Homer’s car, taking it through a car wash, sadly thrilled at finding out what it’s like to have a car. 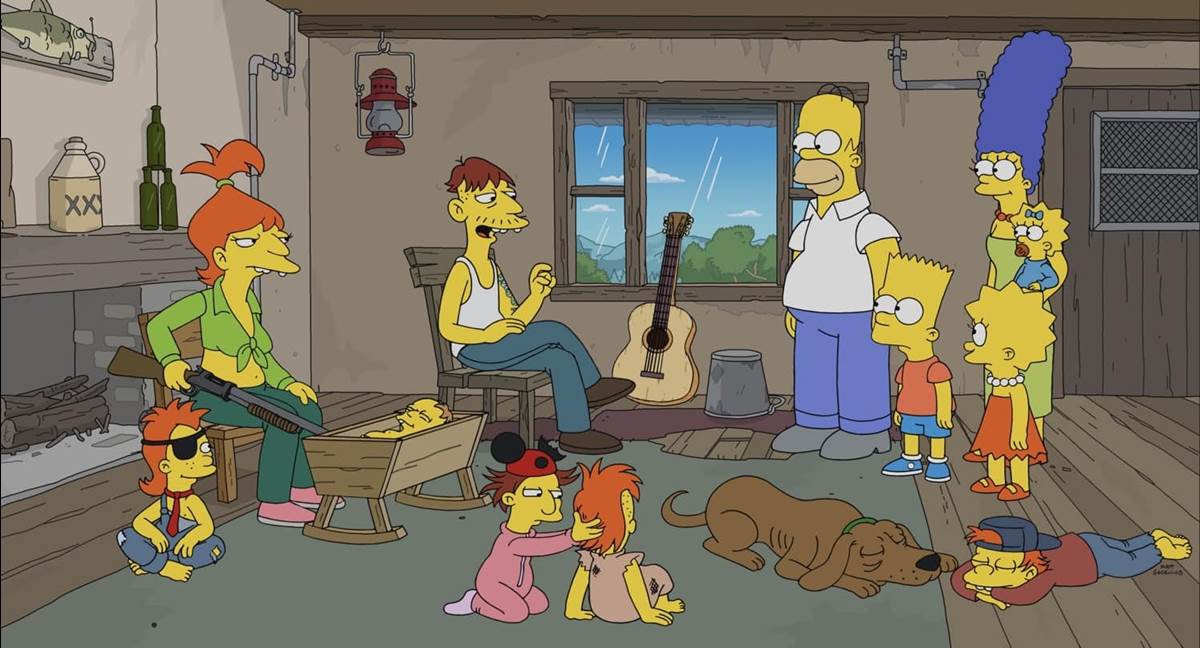 The Simpsons family visit Cletus’ shack so Homer can find a way to repay him for changing his life. “This goober?,” Bart asks. “My wife’s a Goober,” Cletus corrects him. “I come from a long line of no accounts.” He points to the Spuckler Family Tree on the wall, which has Brandine on it no less than three times plus the Georgia Bulldogs mascot, the entire state of Florida, a donkey and a catfish. While Cletus plays a song, Bart plays the pig tails like Mickey Mouse in his old black and white shorts.

Homer takes Cletus to Divey’s Bar to start his singing career. When Cletus asks him how this would help, Homer asks if he’s seen A Star Is Born, listing the casts of all three versions. Cletus says no, but he has seen What Price Hollywood? upon which the first A Star Is Born was based. Homer tells Cletus his plan to make him a singing star, but Cletus shares a very real concern. “Show Business has screwed up a lot of country folk, from Elvis to Britney and Mr. Ed.” Cletus gives in quickly, signing Homer’s contract, which is actually a Beer of the Month Club membership signup form with just a few words changed, including the length of time from five months to “A Gazillion.”

Inside the bar, Cletus is performing with a band. “One and a two and a one and two and a…” he intros, when his guitarist whispers in his ear. “Three? When did that happen?” The original song he performs references quite a few country songs in the lyrics, including “9 to 5.” Homer records and posts it on social media with some hashtags that include “#KanyeWestVirgina” and “#YokelOno.” In Hollywood, Elin Degenerous (spelled that way on purpose) is dancing in her office when an assistant interrupts her. “Yes, I’m exactly as I seem,” she says before her sixth sense tells her someone is getting clicks. Cletus is suddenly a guest on “The Elin Degenerous Show” where she pushes an eject button on the audience who isn’t responding the way she wants. Outside the studio, the eyes on her billboard shoot lasers at one of them as they flee. Back on set, Cletus tells her “You sure look different than you do in your Finding Nemo movies.” Opening up, he tells her about the police problem he has in Springfield and then turns to the camera, asking his fans to do something. We then see Chief Wiggum in his car turned upside down with graffiti on it.

Flying back to Springfield on a private jet, Cletus fires Homer as his manager. “Aww, nothing good ever happens to you when you’re talking to the person next to you on an airplane,” Homer says dejected. In the next scene, they’re both in an office at United Parasites Management Company (UPMC) meeting with Slick Manager (voiced by Albert Brooks, who is also Ellen Degeneres’ vocal co-star from Finding Nemo). He seals the deal when he reveals that Duffman, no longer employed by the beer conglomerate, will now be Spuckman, the mascot of Spuckler Family Moonshine. “We’re going to make you bigger than Campbell’s soup,” the manager tells him. “Not tomato or chicken noodle, that’d be impossible, but there’s one of them where they put in chunks of potato, bigger than that.” He fans out photos of Hollywood wives for Cletus’ commercial and says “Welcome to UPN. Here’s a blank page, sign it and we’ll fill in the rest.” Adding Cletus’ picture to the wall of fame, Slick Manager asks an assistant if Bert and Ernie are still alive. Other famous people on the wall include The Pope, Barack Obama, Vladimir Putin and Hannah Montana.

At home, Marge tries to cheer Homer up when he turns on the TV and sees an ad for Spuckler Family Moonshine. A disclaimer at the end of the “All-American” branded ad reveals that it’s brewed in Finland and employs no Americans. Brandine shows up at The Simpson’s house, blaming Homer for ruining Cletus. 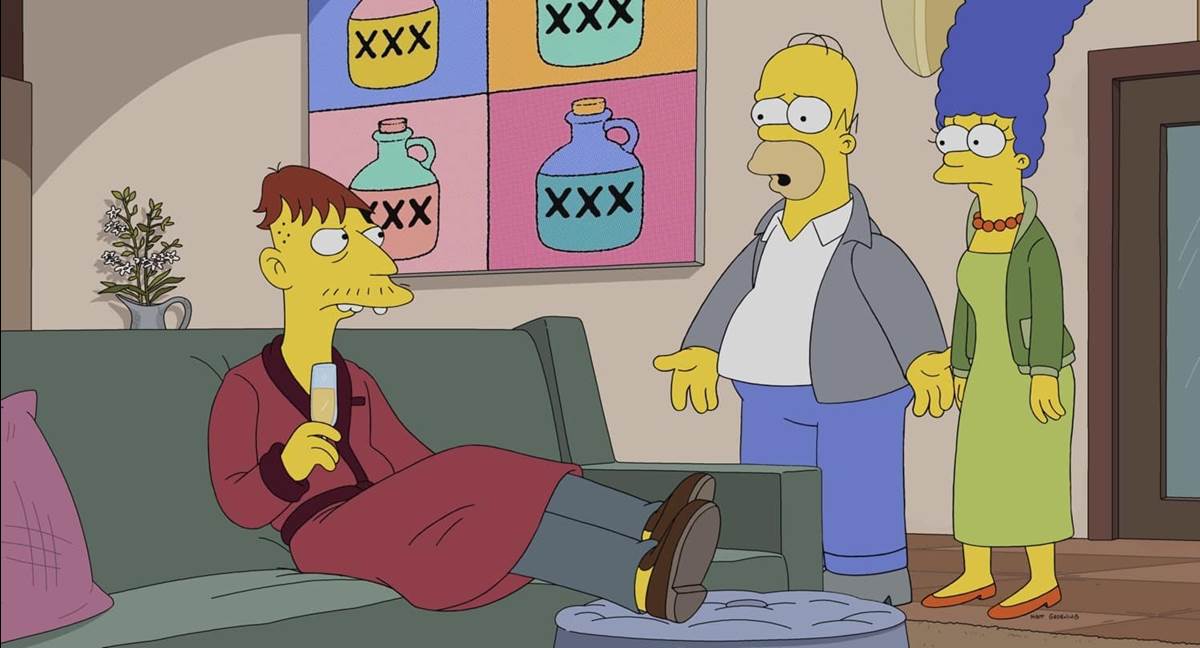 Homer and Marge show up at Cletus’ fancy new apartment, which includes an Andy Warhol-style painting of moonshine jugs. When Homer tells him this isn’t supposed to be how A Star Is Born goes, he points out exactly why he’s not like the film. In response to Marge’s question about how he knows so much about movies, he reveals that he and Brandine used to squat in an abandoned Blockbuster where she gave birth to the twins, Be-Kind and Rewind. Brandine and the kids arrive to change his heart. The kids start singing and he stops them. “No more singing. Not even talk singing, which is hardly singing at all, Mr. Lin-Manuel Miranda.” Addressing his kids individually, three of them are named after streaming services: Disney+, HBO Max and CBS All Access (renamed just a few days prior to Paramount+, although the episode was originally scheduled to air on February 28th before the name changed). Cletus thanks Homer before they part; “You saved my life and then ruined it and then saved me again and for that I am forever neutral.”

Back at UPMC, Slick Manager is trying to woo a basketball player by offering him all kinds of things, including a Netflix special directed by Malia Obama and a role in an animated musical about dinosaurs who survived the comet. He doesn’t take the deal.

In lieu of traditional credits, we get a bonus scene where Chief Wiggum is trying to find the next musical superstar in his jail. Offering up instruments to the inmates, Snake Jailbird says he plays the hacksaw. Chief WiIggum listens to his “song” as he saws through the bars.

We came, we sang, we sawed. ? pic.twitter.com/KN79rhOByT

The Simpsons will return on March 14th with “Do PizzaBots Dream of Electric Guitars?” on FOX.