The second season of Peyton’s Places is in full swing and it follows the NFL great around the country as he explores the history of the National Football League, one piece at a time. For this 15th and final episode, titled “Farewell to Football,” Peyton talks to some of the all-time greatest players, including his brother Eli, about their retirements from the game. 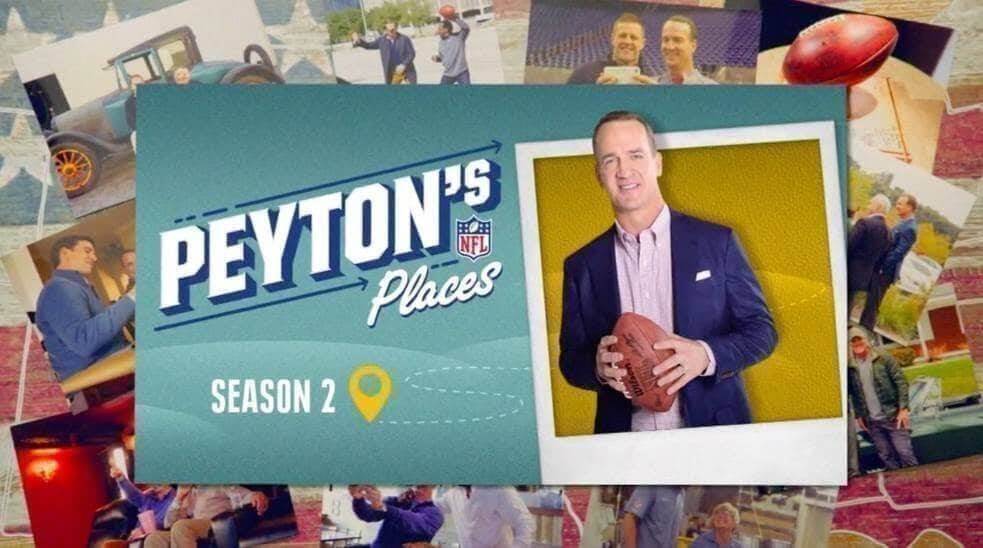 The season two finale opens with a look at Peyton’s retirement speech before he introduces clips of some other press conferences from some of the all-time greats like Dan Marino, John Elway, Brett Favre and many others. If you’re someone who easily cries while watching TV, this episode might just get you.

Peyton then takes a look at some unfortunate retirements that, despite their great careers, didn’t quite go the player’s way. Jim Brown and Roger Staubach headline this highlight segment before we hear about how Washington Hall of Famer Turk Edwards blew out his knee during the coin toss.

Peyton then revisits Lynn Swann who talks about his experience in his last game. Swann tells the story of not getting the opportunity to make a play on a Hail Mary pass on the final play of his last game but also how that surprisingly didn’t change his mind. Peyton then explains what some retirements are planne, but others are not. We then get a look at some players whose careers were ended with injuries, including Ron Jaworski.We then quickly change gears again as Peyton revisits Frank Tarkenton who talks about who talks about how he couldn’t throw the ball more than 40 yards in his final season and yet he led the league in passing.

Peyton then sits down with his brother Eli to briefly talk about his post-retirement experience. Eli tells a story about Arizona Cardinals wide receiver Larry Fitzgerald roping him into a workout after he hadn’t thrown a ball in eight months. Peyton jokes about his brother needing shoulder surgery after that session. There’s something about Peyton and Eli when they get on camera together. The energy between them is always fun.

Peyton then goes back to talking about player who didn’t get to decide when they retied. We revisit with Garrison Hearst who talks about breaking his hand in a game and then not getting any calls from teams after his recovery. Peyton then provides a list of iconic players who didn’t get to retire with the teams they were famous for, including Joe Namath retiring as a Ram.

Peyton revisist with Ronnie Lott who talks about being cut from the Jets by Pete Carroll and how that gave him a level of respect for the longtime coach. Peton then catches up with his father, Archie, and reads him a note that he got from the Vikings. The note was written by Archie to the coach who cut him. It’s a nice moment to see the level of respect that is shared between players and coaches.

Sitting down with Eli again, the Mannings discuss Eli playing his whole career for the New York Giants, even if he was a member of the San Diego Chargers for about 45 minutes. It’s fun revisiting one of the strangest moments in NFL draft history and imagining how things could have been different. Peyton then shifts focus to a player who knows a thing about retiring from the game of football: Brett Favre. The longtime quarterback retired three times and here we get to see news clips from his various announcements as well as some of his on-the-field highlights. We go back to Peyton’s visit with Favre from season one and he talks about how it was never for the money but simply because he loved to play.

We then see more of Peyton’s retirement speech. Hearing weepy Peyton force his way through the speech is always emotional, but he still manages to put a smile on your face when he jokes about his daughter being an informant to NFL insiders like Adam Schefter.

He then explains that the trick to retiring is doing it at the right time. Peyton’s last game was a Super Bowl win and Elway walked away after winning back-to-back Super Bowls. Peyton sits down with Elway to talk about how hard it was for him to walk away on top. Elway explains that injuries helped him to realize it was his time.

Peyton then talks about life after football. He explains that, when his dad retired, there were no jobs on ESPN+. Archie talks about having to go to work outside of football unless you were going into coaching. They then joke about Eli needing to get another job. Peyton joins Swann again, who became an on-the-field reporter for ABC. In fact, he interviewed Peyton’s parents during Peyton’s first game at the University of Tennessee.

Peyton says the urge to get back into football can be irresistible before rejoining Marshawn Lynch, who has also retired three times. Lynch talks about the great opportunities he had to get back into the game, including playing for his hometown Oakland Raiders.

Peyton then revisits with Darrell Green who says the thing he misses the most about football is actually playing the game. Green’s positive energy is just infectious and it kicks off a great ending to this episode. Rodney Harrison keeps it going by saying he will always be grateful for having the opportunity to play against guys like Peyton and Tom Brady. Archie explains that he never took a win for granted and just always made sure to enjoy the game. Swann talked about holding a special play for the end of the game and the thrill he got from that play finally working.

The episode comes to a close by getting back to Eli’s retirement speech. Peyton and Eli then sit down again for the credits, during which Eli explains that he has his own show coming to ESPN+, breaking down College Football. Peyton jokes about Eli not having to do everything his big brother does and Eli retorts that Peyton will be his backup in two years.

This episode may have bounced around between topics a little bit, but it was a great finale to the second season of Peyton’s Places. It was a good balance of emotional moments and goofy humor and of course plenty of football history throughout. We will certainly be looking forward to the third season of Peyton’s Places, which will debut this fall.