Today’s adventures in Big City took us to a newly opened location of Cricket’s favorite fast food restaurant, and a chaotic adventure throughout the city proving Tilly’s “Spaghetti Theory.” 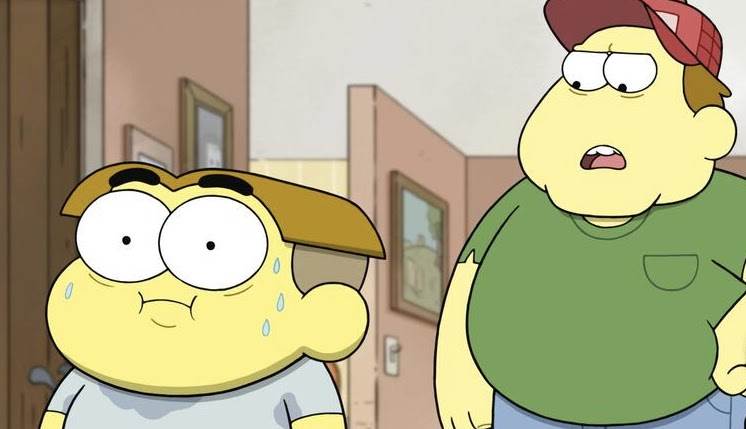 After being occupied by both Big Coffee and Wholesome Foods, the retail location next to the Green’s house is now home to a new Burger Clown location.

As Cricket realizes what is now next to his home, fast food die-hards will easily realize the cravings that he goes through. See Also: In & Out Burger Fans, WaWa Fans, and Whataburger Fans (and others I probably failed to mention). As part of the opening festivities, Burger Clown is offering free food for the first week that they’re open.

Cricket, who formerly ate at Burger Clown every once in a while, is now ecstatic that the Burger Clown is next door and that they can eat it everyday, much to Bill’s chagrin due to the lack of nutritional content.

Cricket argues that with the french fries (potatoes!) and pickles, the meal is basically a salad so he should be eating there all week. Bill says that he bets if Cricket ate there everyday, he’d be sick within a week. Cricket, though his father was speaking as a turn of phrase, takes that bet, bringing Tilly along for the ride.

The pair show up at Burger Clown and tell Mr. Burger Clown himself that they will be eating there all week, much to the burger mascot’s delight. After a rousing song, which I’m fairly confident is simply titled “Burgs and Fries,” performed by Cricket and Mr. Burger Clown, voiced by special guest star Dan Fogler (Fantastic Beasts and Where to Find Them), Cricket and Tilly wake up at home. Cricket wakes up and is now sweaty and overweight, and Tilly is literally green and sick to her stomach. Bill comes into their room, shocked at the appearance of his children. Cricket suggests that all they need are a few Burger Clown burgers to make them feel better. Tilly though, never wants to see another burger again, and is fighting off the burger demons. Bill cuts the children off, demanding they stop going to Burger Clown, especially since Cricket can’t get through a sentence without panting.

Cricket obliges, which regular viewers of the show know means he has something up his sleeve. Moments later, Remy appears at the door wearing a heavy winter parka. When Bill points out the nice, heavy winter jacket that Remy is wearing this time of year, he panics while explaining he has thin blood and “is often chilly.” Bill unzips the jacket and a dozen burgers fall out. Bill sends Remy home and sends Cricket to his room, where after struggling to get into his hammock, spots balloons and something fun happening on the other side of the fence.

At the table, Tilly is eating fresh fruits and vegetables with her dad, when they realize Cricket has been awfully quiet and go check on him. As they go in the room, they find Cricket’s body has been replaced with a dummy and Bill looks out the window to find that that fun thing Cricket spotted earlier was a newly opened play place at the Burger Clown. Panicking, Bill heads over to the Burger Clown to retrieve his son, who is eating a burger in the ball pit, but he can’t. There’s a sign saying “Kids Only,” and rules are rules. So he calls in Tilly, who is spry thanks to all the fresh fruit and a high-speed (?) chase ensues.

Cricket tries to escape down the slide, but thanks to all the constant visits to Burger Clown, gets stuck. He screams, echoing down the tube that the slide is now his new home, when he sees his life in the slide flash before his eyes. He tells Bill he doesn’t want to eat at Burger Clown anymore, and wants to go home. Bill tries climbing up the slide from the other end, and he gets stuck as well.

Smash cut to the news report, since the two are stuck in the slide, the newly opened Burger Clown must close. Don’t worry though, Mr. Burger Clown is on the scene to remind everyone there are over 600 other Burger Clown locations.

Bill loads up the fresh fruits and vegetables of the farm for delivery, and sends the kids out to deliver them with their wagon while he tends to…an issue…with the oven. Tilly loves walking through the city and the people, and tells Cricket the city is intertwined, like a bowl of spaghetti, referring to Spaghetti Theory, a real thing outside of the animated world of Big City Greens. Delivering to Brett in the apartment next door, Tilly suggests he cleans his apartment, and Cricket sarcastically warns her that that request might kick off a series of events throughout the city, based on her “spaghetti theory,”

Spoiler alert: It does.

Brett starts cleaning when the mold grows over his arm, sending him into a panic where his downstairs neighbor hears all the racket, starts pounding on the roof and falls, getting stuck in his recliner. The series of events also involves trapped squirrels, a rival spy from Vasquez’s past life, a faux reality cooking show, Gloria’s slow-mo fondue deliveries through the obstacle district of Big City, and an upset and frightened city mayor.

Eventually a rogue Hot Dog Cart (all because of Tilly’s original request) chases the pair through the rest of the delivery, and crashes along with them back at the Green’s house where the oven crisis has been solved, though dinner has been ruined. It’s a good thing they have all those hot dogs.

The story of this episode is very much “blink and you’ll miss it,” with a casual glance at a text message will leave you wondering why a squirrel is running around with a peanut butter jar stuck on its head. Where this half of this week’s episode truly shines though, is that it features a majority of the characters we’ve encountered throughout the show. Remy, Vasquez, Gloria, Brett, Madea Media, Dawn and Don, and tons of others, if even just for a glimpse.

The latest episode of Big City Greens is now available on the Disney Channel and the DisneyNOW app.