Touchstone and Beyond: A History of Disney’s “Pretty Woman”

Pretty Woman launched Julia Roberts into the stratosphere of Hollywood and rejuvenated the career of Richard Gere. 1990’s mega hit also brought Roberts a Golden Globe win for her performance and Oscar nomination. For this week we look back at a film that defied the odds at the box office and continues to hold a high place in many people’s hearts. 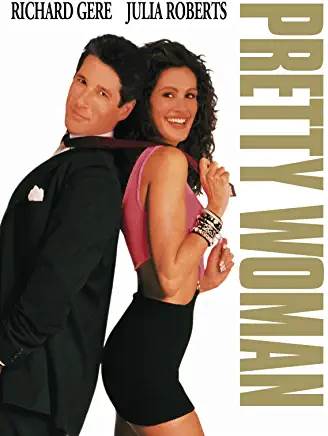 Vivian (Julia Roberts) is a prostitute in Los Angeles whose life is about to change. While working the streets of Beverly Hills, she meets Edward (Richard Gere) a wealthy businessman who needs some directions back to his hotel. For twenty bucks she agrees to get in his car and escorts him back to the hotel. Vivian stays the night and is enticed by Edward to stay for the week as his employee while he is closing a business deal.

Vivian can’t believe her luck, but she has trouble fitting in with the people and world that Edward inhabits. With the help of the hotel manager Barney (Hector Elizondo) Vivian learns to dress and act like she belongs in Edward’s world.

Phillip (Jason Alexander) is Edward’s lawyer and he is very concerned by the presence of Vivian. He sees a change in Edward and starts to worry that Vivian is going to upset the deal. Phillip has spent years working on this deal and could lose a lot of money if the venture falls through.

Phillip is correct because Edward has changed thanks to Vivian’s presence. The business deal changes which ends Phillip and Edward’s relationship. While it seemed like the relationship was too good to last, Edward and Vivian go their separate ways, only to have Edward realize how much he needs/loves/wants Vivian and they reunite on the balcony of her apartment.

Hector Elizondo is the one genuine human amongst the slew of supporting characters who are shallow and only see Vivian as a commodity. Elizondo’s Barney is far different. Barney learns to accept Vivian even though she is a prostitute because Edward is such an important customer. The stern manager role fades to a compassionate human being who is willing to help because Vivian asks.

When Vivian has trouble buying clothes and complains to Barney about the poor treatment that she experiences, Barney makes some calls and enables Vivian to purchase a dress for an evening date with Edward. It is also Barney who Vivian turns to for help in preparing for this business dinner. Patiently guiding her through how to sit and which utensil to use with which food, Barney shows a compassion and heart that most of the characters lack. Barney is the only one who willingly helps Vivian without asking anything in return.

Pretty Woman is supposed to be a feel-good romantic comedy that has a happy ending. I felt no joy watching this film. The movie has taken a dangerous profession like prostitution and turned it into something cute and fun. Vivian is living in a destructive seedy world and the truth of this danger is on the outskirts of the film. The death of the one call girl at the beginning of the film and the rampant drug use by Kit (Laura San Giacomo) gives viewers a more accurate depiction of the life of a prostitute. This isn’t a glamorous world despite what the movie is trying to tell us.

I genuinely didn’t like the character of Edward. He treats Vivian with the same coldness that he shows when he is buying a company. As nice as Edward is to Vivian, she is coming from a world of nothing. I feel like their relationship is based solely on the fact that Edward is her meal ticket and a way out from having to walk the streets at night. Anyone would be ‘in love’ if in the same circumstances.

The movie is filled with so many cliches that it is hard to watch now and enjoy. Looking at the movie from the lens of 2021, Pretty Woman is a relic of the past that doesn’t hold up to today’s standards.

Pretty Woman is a well-liked film that sits on many must-see lists. While Julia Roberts is a standout, I just didn’t find the movie appealing. The topic of the film has a very dark undertone that isn’t romantic comedy material in my mind. The life of a prostitute is not a glamorous experience, and Pretty Woman seems to push the idea to viewers that if you just wait for the right guy to offer you money, your life will change.

The relationship between Edward and Vivian doesn’t seem genuine. Their affair begins with him offering her money, and the poor destitute Vivian stays with Edward because of a promise of more money. In the thirty-one years since the movie was released the story is riddled with cliches that are eye rolling at best. The scene where Vivian and Edward are in the park and she gets him to take his socks off is silly. Even worse, only a couple of minutes later we see Vivian listening to Edward reading Shakespeare to her.

This was my first time watching the movie and I expected much more from this box office juggernaut of 1990.

Next week we conclude our ‘Awards Season” retrospective with the Tina Turner biopic What’s Love Got to Do With It.