Fans of the FXX comedy series Dave will soon get more of Lil Dickey and GaTa in the show’s second season, which is currently in production. To build up hype, Dave Burd and GaTa joined producers Jeff Schaffer and Saladin Patterson at South by Southwest (SXSW) to talk about why the show is resonating with audiences and what’s in store for the sophomore season. Here is a recap of the event called “Hi, I’m Dave.” 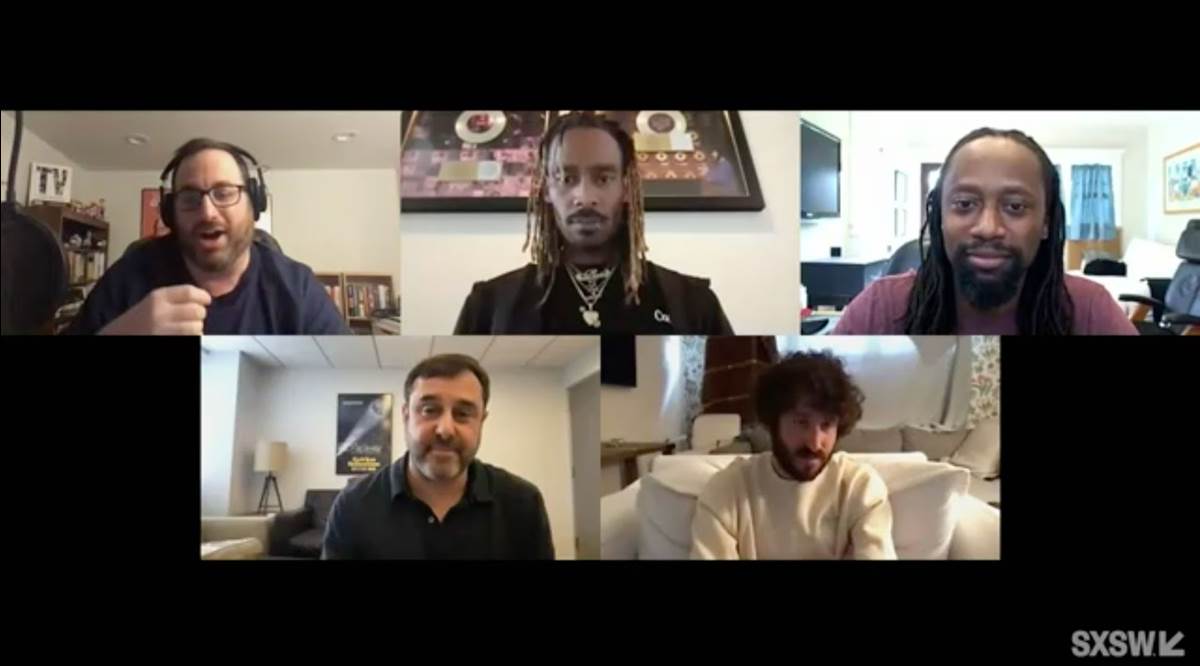 Growing up, Dave confessed to being influenced by shows like The Fresh Prince of Bel Air, Seinfeld, Friends, Martin and Curb Your Enthusiasm, which was also produced by Jeff Schaffer. “I saw there was a lot of Larry [David] in you,” Jeff shared, addressing Dave directly on the video screen. “Whether you were a rapper, ice cream salesman or accountant, the way you interacted with and had problems with a lot of things most people don’t have problems with… that’s what immediately drew me to you.”

Familiar with Lil Dickey’s comedic raps, writer/producer Saladin Patterson thought he had an idea of what his TV show would be. “Probably as many people may do, I probably underestimated just how thoughtful and deep and meaningful he wanted the show to be,” he explained. “That came across very clearly when I first met with him and Jeff.” The show is outrageous, but also profound. “He’s a lot deeper than most people think, but not as deep as he thinks he is,” Saladin joked.

Friends in real-life, Dave chronicled how he first met GaTa when his videos went viral and he was capable of selling out 1,200 seat venues but didn’t have the confidence or experience to perform. Hired originally as his hype man, he and GaTa have been friends ever since. “I have a few friends who are really funny, they’re really funny people, but you put a camera in front of them and they just melt,” Dave shared about needing the real GaTa to do a screen test just to make sure he could be funny on camera, too. “I had to make sure that wouldn’t happen with GaTa.” He killed it.

Part of the process for crafting the series for Saladin Patterson was to sit down with Dave and GaTa and hear both of those stories so he could plot out the season. That made it evident that there should be a GaTa-centric episode about his own mental health. “By the time we got there, honestly, I was eager to get it out,” the writer revealed. “We had been living with it for so long, I was like finally, finally we get to put this down on the page rather than just talk about it.”

While the storytelling process, based on their own lives, had it’s challenges for Dave as well, approach the topic was especially nerve wracking for GaTa. “For me to showcase that, that was deep for me because in the entertainment business, everything is based around that persona and looking cool.” In addition to chipping away his rapper visage, tackling the mental health of a Black man was groundbreaking for TV.

“The authenticity of the show comes from frankly the bravery of GaTa and Dave who are showing themselves,” Jeff Schaffer added. “They’re revealing things about themselves that are true and this is not a character… There’s such a thin membrane between the real them and these characters… You get to see right inside, see what’s really going on and that’s a really brave thing for two people who, this is their first TV show.”

After peeling back the curtain on some of the truth revealed in the first season, the team gave fans a little taste of what’s to come in the second season. “I would say this season, we wanted to explore how more success breeds more pressure and we also wanted to explore as everyone gets more successful, what does that mean for Dave and his support group,” Jeff explained, revealing that Dave is under a lot of pressure as he deals with making his first album.

He’s under pressure with a deal and trying to make an album.

“It’s more psychological and it’s more of an arc of everything, there’s less one-offs, everything’s tied together,” Dave concluded. Now that both he and GaTa have a season behind them, they are better able to handle the pressures of playing characters based on their lives and feel like what they have in store for fans will be an elevated experience.

Season 2 of Dave will be airing later in 2021 on FXX, with new episodes arriving on Hulu the next day.