Anne and the Plantars (with the help of Marcy) are on their way to the first temple to help get Anne back home and charge the stone for the music box. 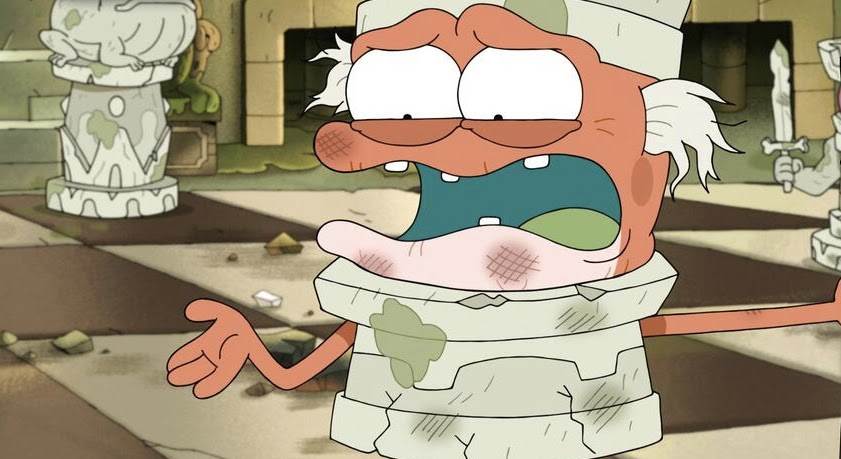 This episode wants to get straight to the point, no fussy intro and theme music to begin with. We see Anne and the Plantars around the breakfast table eating Pancakes, and reminiscing about the last episode wherein we discovered that Hop Pop had hid the Calamity/Music Box from Anne to protect his family.

Marcy arrives and says that they are ready to enter the first temple to charge the stones on the music box to be able to get Anne back home.

According to Marcy’s research, the temple will contain a series of challenges that will test their intelligence, and Anne is concerned that Marcy will get in the zone as usual and lose sight of their safety.

As they arrive, Polly points out that the temple might have been overhyped, seeing only an outhouse before they find the real temple hiding behind a bunch of “brain mushrooms.”

As they enter the temple, the conflict between Hop Pop and Anne is more evident than before, leading Marcy to realize that something has happened while she has been away.

They enter and find the first temple puzzle, similar to a Rubik’s cube, which lifts the holder of the cube into the sky and rotates the walls of the room around them, which is unfortunate for those not holding the cube.

The gang enters the next room which appears to be a giant dance floor, which is full of traps and flaming fountains of fire. However, Marcy is “pretty sure” one other person is needed on the only other green button in the ground, but everyone hesitates, leading Anne and Hop Pop to argue over which of them will do it. Anne suggests that its her quest and she should do it, while Hop Pop argued back suggesting he cares about her too, which Anne points out isn’t true, as he has proven he cares more about his actual family than her.

Anne leaps over him and jumps on to the green space, stumbling and triggering some traps but ending up okay. The two continue to argue into the next room where a game similar to Chess must be played. Almost channeling a different wizard-based franchise, Anne and the Plantars actually become the pieces in play while Marcy plays from her podium. TWIST! Anne got assigned to the opposing team! Now the argument has become all too literal, and the pieces are being controlled by Marcy, who is very much in the zone, and the Temple itself while Anne and the Plantars are at the mercy of the two.

While in play, Hop Pop finally confronts Anne, asking her what it would take for her to forgive him and move on. She said time. In a heartfelt moment, they forgive each other, and Marcy realizes she got so caught up in the game, she was putting them in danger and forfeit the game. The temple bars Marcy from playing the game, and a bunch of “failure arrows” light up pointing their way out of the temple, which leads straight to the outhouse.

Turns out, the last game was a test of humility, making sure someone was ready to lose if they had to, and the podium to charge the stone was located….in the outhouse. The stone, once charged, points to the next temple, though Anne and the Plantars prefer a break first.

We then see a short scene with King Andrias getting a message from Marcy, alerting him to their progress, and we see him go into a private chamber, telling a creature he refers to as “my lord” that the prophecy is being undone, and soon they will have their revenge. Roll Credits.

As a reminder, when Marcy arrived in Amphibia, she was warped inside the walls of Newtopia and after doing some work for the newts, she became the Chief Ranger of the Newtopian Knight Guard, who under her title "Master Marcy" works directly for the king of Amphibia, King Andrias.