Pixar’s Soul may not have had a traditional release, bypassing theaters and even Premier Access to arrive as a Christmas gift to Disney+ subscribers. But despite the film’s unorthodox distribution for a Pixar animated feature, Walt Disney Studios Home Entertainment will release the film on disc and digital on March 23rd. This review covers the 4K UHD/Blu-Ray/Digital Ultimate Collector’s Edition release and fans can also pick it up on Blu-Ray, DVD, and digitally from participating providers.

Joe Gardner has spent his whole life dreaming of becoming a professional jazz pianist, but things haven’t gone according to plan. Feeling trapped in his teaching job to pay the bills, he finally seems like he’s about to get his big break when a misstep sends his soul to the afterlife. Trying to escape, he ends up in “The Great Before” and is assigned as a mentor to a reluctant soul named 22 who decides to help him try to return to earth.

If you’re a Disney+ subscriber who has scaled back purchasing physical media, you may be asking what the allure is of owning Soul on Blu-Ray or 4K UHD. Aside from the film looking better on disc, the biggest sell is a handful of bonus features exclusive to this release, including a feature-length audio commentary and deleted scenes. All of the featurettes are included in the Disney+ Extras section, so if you’re fine with the streaming video quality and don’t care about the exclusive extras, this release probably isn’t for you.

Advertising over an hour of bonus features, some of them are included in the Disney+ “Extras” section. Bonus features with an asterisk are exclusive to the home video release as of the time of this review.

On 4K UHD, the realistic details of the earth scenes have sharp details with lots of texture in what can be described as a photo-realistic environment. Compared to the Blu-Ray, loss of definition is evident primarily on textile textures. The Great Before uses a soft focus and intentionally blurry edges on characters and objects while the blue, purple and green colors feel more vibrant in UHD compared to the Blu-Ray presentation.

Soul arrived in a standard sized black Blu-Ray case with stacked disc holders on both sides of the interior. The entire presentation was housed in a holofoil embossed slipcover and inserts include a Disney Movie Insiders/Movies Anywhere code where you can redeem points and your digital copy, as well as a flier for DIsney Movie Club. All three discs have artwork featuring different characters from the film.

The Blu-Ray disc opens with a preview for Luca. Through the Sneak Peeks menu, an additional ad can be accessed for Disney+. All of the discs use the same menu, featuring an animated environment of The Great Before set to score from the film.

The 4K UHD/Blu-Ray/Digital Ultimate Collector’s Edition of Pixar’s Soul presents the film with a stunning 4K presentation that can’t be matched by streaming along with some new bonus features exclusive to the home video release. Disney and Pixar animation collectors will be grateful for the opportunity to add the film to their shelves and everything about this release is top notch. 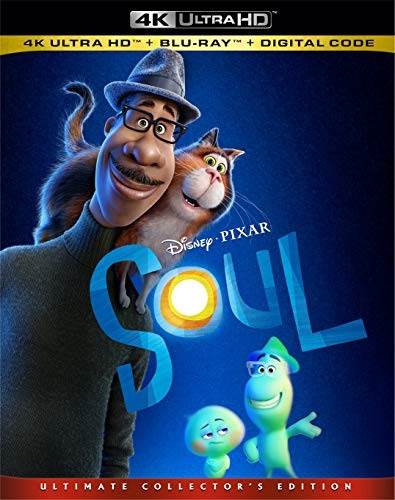 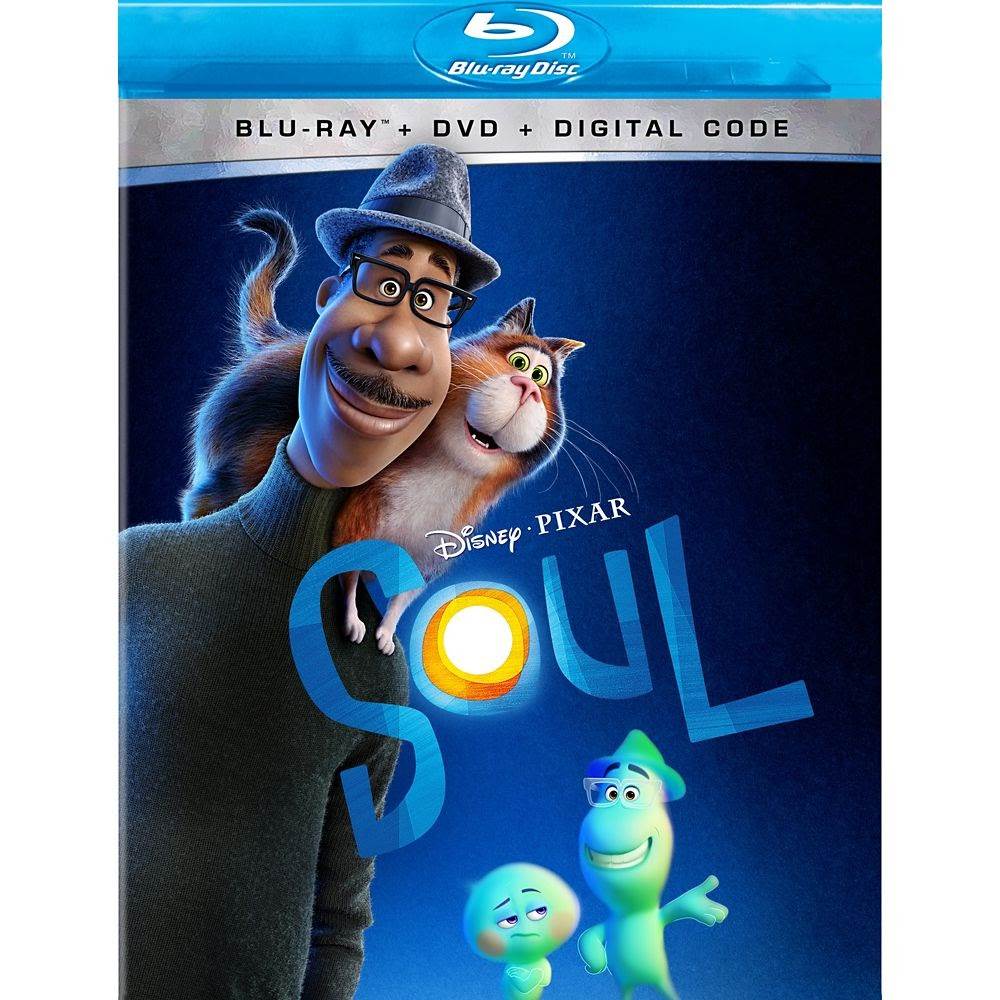 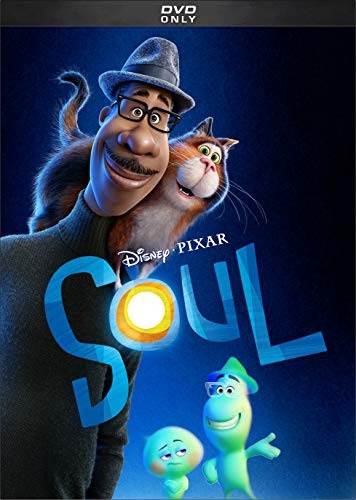 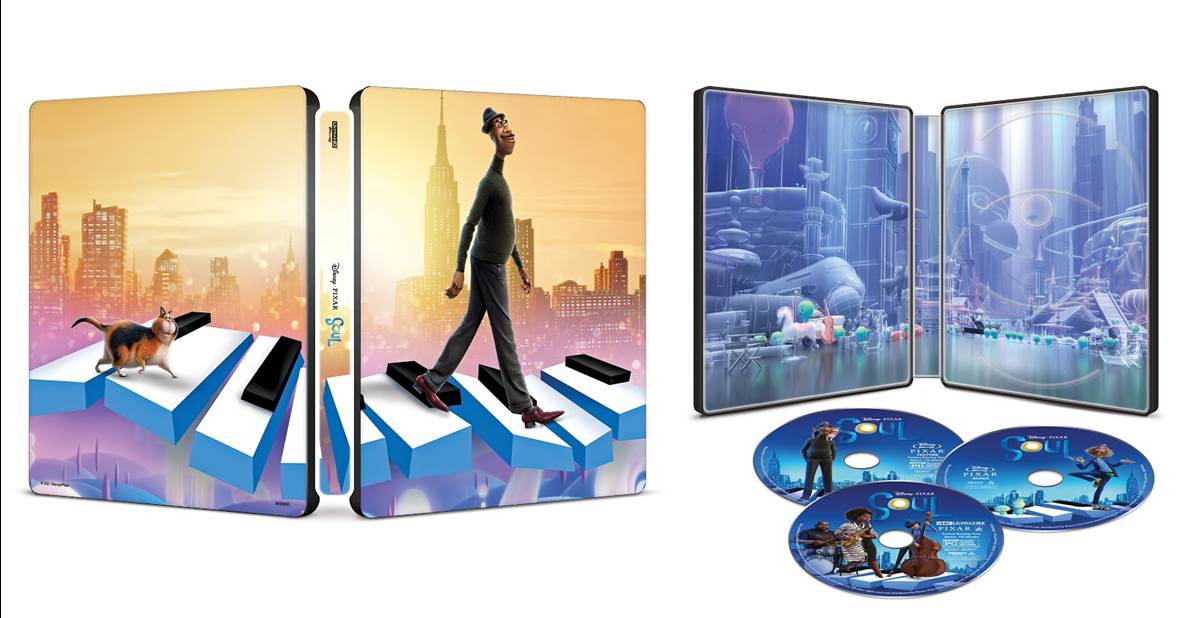 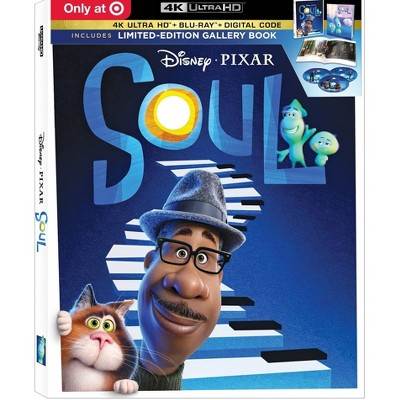