This week’s episode of Big City Greens shows us the addictive nature of social media, and a caricatured look at the modern animation process. 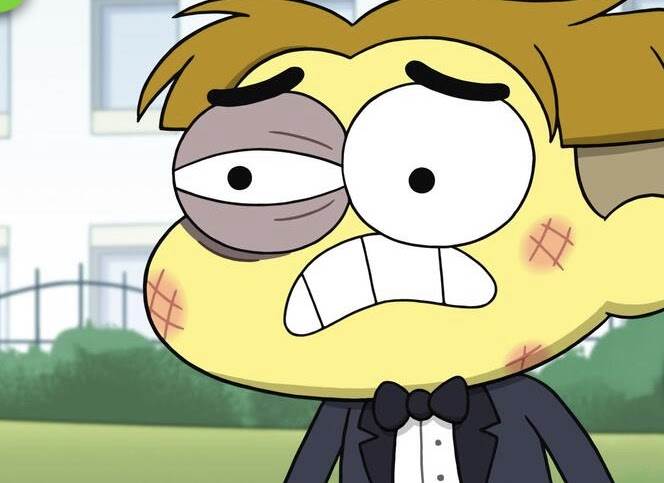 A new social media app is taking Big City by storm, and Remy wants in on the fun. The app, “Ding Dong,” is instantly recognizable as a parody of TikTok (and its users). Remy starts off by doing fun dances for the camera, but receives no “likes.” That is, until Cricket pogo sticks into his window, asking if he wants to come over later.

Cricket’s smooshed face against the glass of his window garnered all the likes that Remy was looking for. They go to Cricket’s house and start filming more stunts and tricks, even getting the animals involved.

The stunts and tricks continue as Remy realizes his new brand and tries to increase his followers to over 100,000 so that he can be verified as an official Ding-Donger.

As Cricket takes time in between stunts, Remy realizes his viewer count is dropping and his special official verified checkmark has disappeared. Comments ask where the next video is, and also accuse Remy of giving up now that he is official. He jumps back online and promises that a huge stunt will be performed later on in the park. Cricket, battered and bruised agrees to help his friend, saying he’ll do anything for his buddy.

The crowds gather in the park for a giant stunt involving ramps, cars, goats, cows, and the hottest hot sauce in the city. When an old timer from social media platforms past shows up begging Remy to “collab” with him, Remy realizes the error of his ways, having left his best friend beaten, battered, and bruised in the name of viewer counts and instant gratification. Shouting “Upsies,” Remy is tossed into the sky by Vasquez pushing Cricket off the car as it’s set to go downhill and setting off the stunt, but Remy can’t get out in time, and is now the subject of his own creation.

The stunt concluded in a splashdown in “Organ Melter” hot sauce, that Cricket goes and retrieves his friend from, before heading home to be hosed down by Gramma Alice, where their notifications go off only to find out that their friend Benny had filmed the whole stunt for his own DingDong, and has now gone platinum.

Meanwhile, Gloria watched a single DingDong video, realized she is now too old for the internet and is now free.

Tilly and Cricket are watching their favorite animated program, Kingdom of Lore. Well it’s Tilly’s favorite, she has written over 1200 pages of Fan-Fiction, but this was Cricket’s first episode but he likes what he has seen so far. Gloria comes into join them and tells them that she got a new internship at the studio that makes the show, and brings them with her to work.

Full Disclosure, I thought that this was going to lead to Gloria losing another job because of the Greens, but alas, it did not. Let’s get that out of the way now.

At the studio, the kids meet the showrunners of Kingdom of Lore, Topher and Blaine, who look and sound an awful lot like the Houghton Brothers, creators of Big City Greens. The kids happen to be at the studio during the production of the finale of their favorite show, which has some not-coincidental parallels to HBO’s Game of Thrones. In the writers room, where the team is struggling, Tilly suggests a complex, more rewarding ending, that justifies all characters that the writers agree is brilliant. However, Cricket suggests an episode that is full of explosions and turns the main princess evil, that Tilly calls “hot garbage” saying that his episode will ruin five seasons worth of growth for cheap spectacle. Of course, the writers want to go with that episode because it's easier to do so.

The siblings now go through a highly comical parody of all stages of the modern television animation process as they try to get their respective versions of the episode made. Luckily, the deadlines are so pressing, that everyone involved is too distracted to care about all the differences they are seeing, including the storyboard artist that is too excited to be drawing 1000 horses needed for a scene.

The pair get into the recording studio where two caricatures of Bob Joles and Artemis Pebdani, Bill and Gramma Alice respectively for the series, are in the studio confused at all the crayon notes over the scripts. Cricket made backup copies of his script and his is recorded before all the parts of the episode are sent, nay, catapulted to South Korea to be animated.

Tilly tries to stop the catapult launch (Production Delay!) but fails. Luckily, Gloria tells Tilly that it's the Studio Executive who has the final approval of the episode. Ed Zecutive shows up immediately after and gives his approval to the episode when Tilly has had enough and screams at the showrunning siblings and executives pleading for her episode. Zecutive likes her passion instead of dealing with a bunch of yes men, and agrees to her ending. Feeling sorry for Cricket, she asks that they combine some of his elements into the episode as well, which is the final version that aired on TV. Excited to see if everyone loves their episode as much as they did, the kids check the internet for feedback and are aghast at what they find.

The latest episode of Big City Greens is now available on the Disney Channel and the DisneyNOW app.