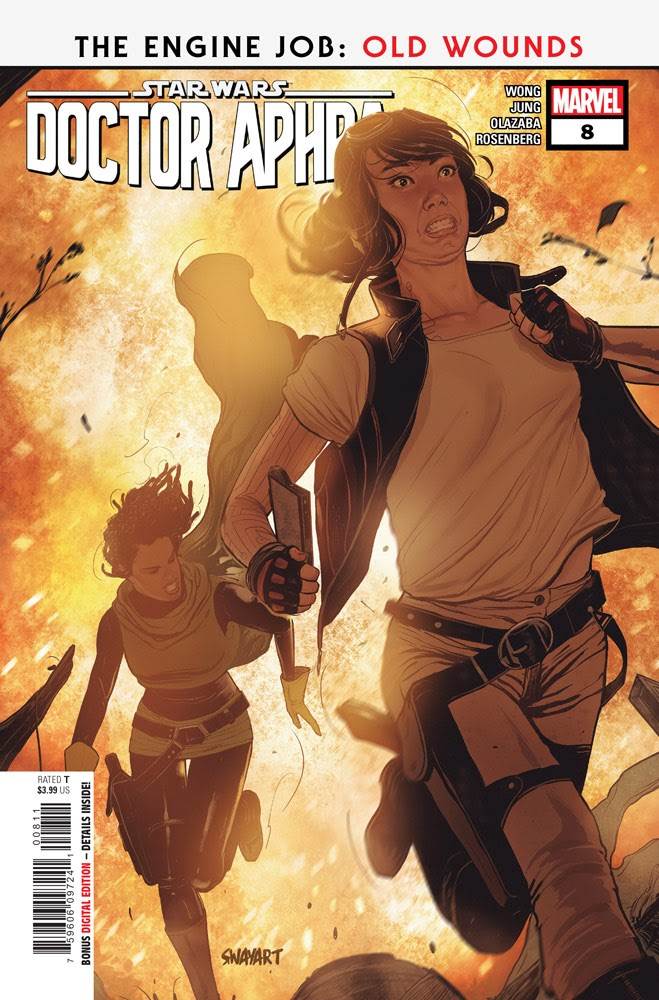 Interrelated stories in Marvel comic books are certainly nothing new, but as a Star Wars fan it’s a relatively fresh idea to have a number of ongoing titles winking at each other as their stories progress through the months. Case in point: issue #8 of Star Wars: Doctor Aphra Volume II, which sees rogue archaeologist Chelli Lona Aphra pairing up with her ex-lover Sana Starros to investigate the derelict wreckage of a Nihil battleship from the Lucasfilm Publishing’s recently launched Star Wars: The High Republic cross-platform initiative.

“The Engine Job – Part 3: Old Wounds” picks up with Aphra and Sana on the Outer Rim planet of Dol’har Hyde (get it?), where an Ortolan bartender informs them of the Sullustan Remy’s (see previous issues) attempts to retrieve ancient technology from the ships mysteriously embedded in the trunks of trees on the planet’s surface. That image alone is worth picking up this issue, but there’s also a cool Indiana Jones-esque adventure to go along with it, as is Doctor Aphra’s usual reason for being. 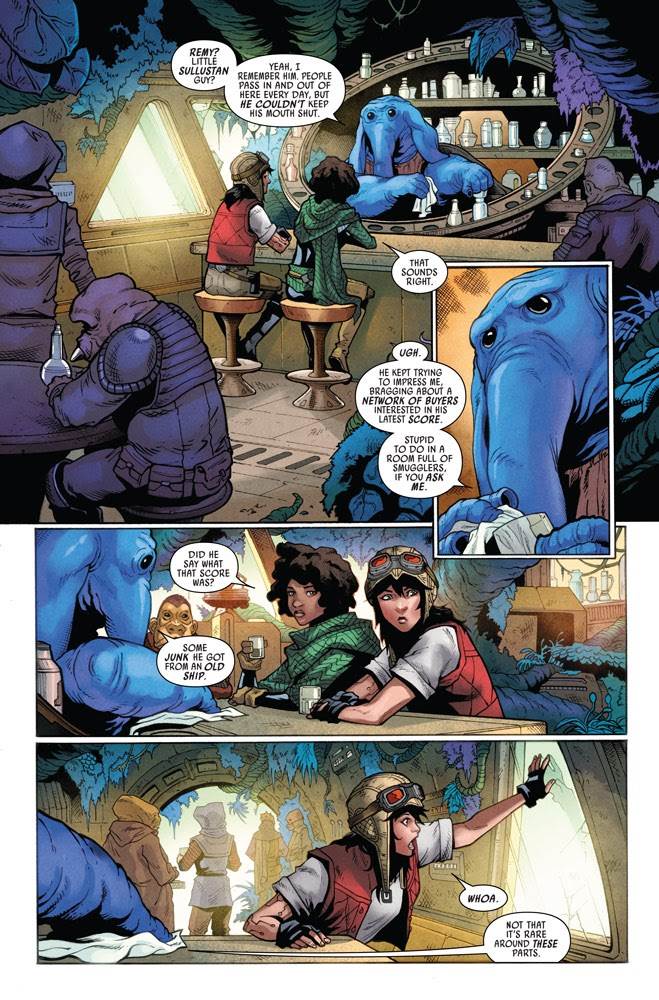 The two women explore one of the Nihil ships and find that Remy may be mistaken (or perhaps intentionally misleading) about what he found inside. But Aphra’s technical know-how means she has a better grasp on how to unlock the centuries-old tech, which may prove invaluable to the Rebel Alliance or the Galactic Empire– depending on which side of the galaxy-wide civil war roves to be the higher bidder for this largely amoral protagonist. Naturally their plan is interrupted by the arrival of General Vukorah of the Unbroken Clan (itself a tie-in with Marvel’s current Star Wars: Bounty Hunters comic), who wants the Nihil’s experimental hyperdrive technology for herself. Can Chelli and Starros escape Vulkorah’s wrath and keep the priceless machinery intact long enough for them to make use of it? 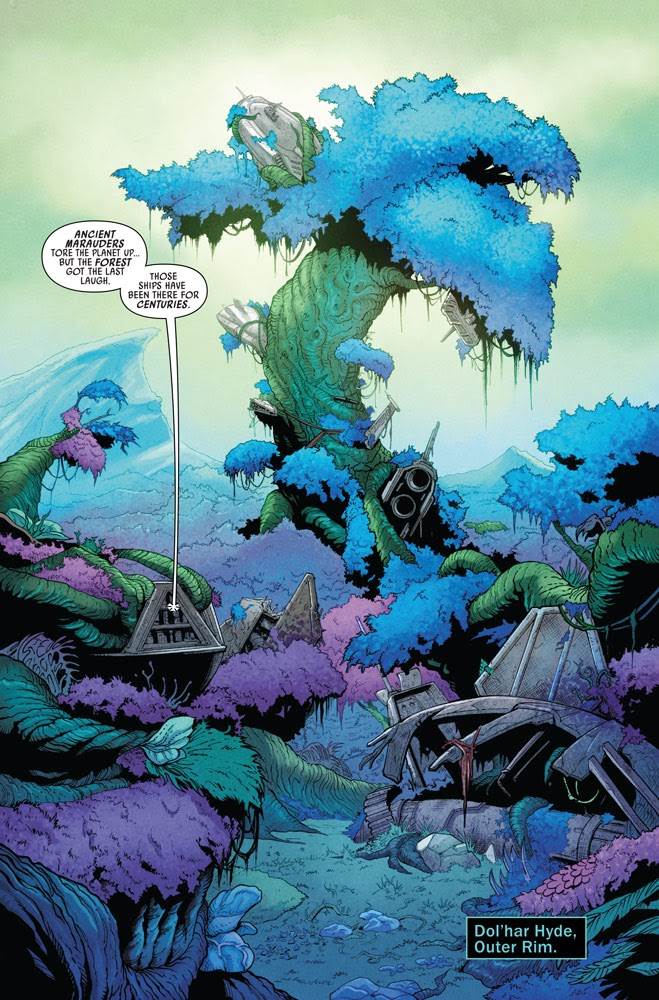 We also get a welcome mention of evil droids Triple-Zero and BT-1 and Aphra’s erstwhile Imperial-turned-rebel paramour Magna Tolvan, plus a brief interlude to Canto Bight, where contract assassin Just Lucky has run afoul of the criminal organization known as the Sixth Kin. Together with his unfriendly associate Ariole, Lucky is brought in front of Sixth Kin leader Wen Delphis for a secretive assignment apparently to be revealed in a later installment. Altogether, this issue continues Doctor Aphra’s trend of being one of the more compelling and exciting series in Marvel’s Star Wars stable these days. Writer Alyssa Wong’s dialogue, plots, and pacing are crisp and engaging, while artist Minku Jung is doing a really terrific job of illustrating the perfect tone and dynamic action setpieces to accompany the story. I am curious to see how this title overlaps with the upcoming Star Wars: War of the Bounty Hunters crossover event, but we’ll find that out before too long, as the next issue is due out near the end of April. 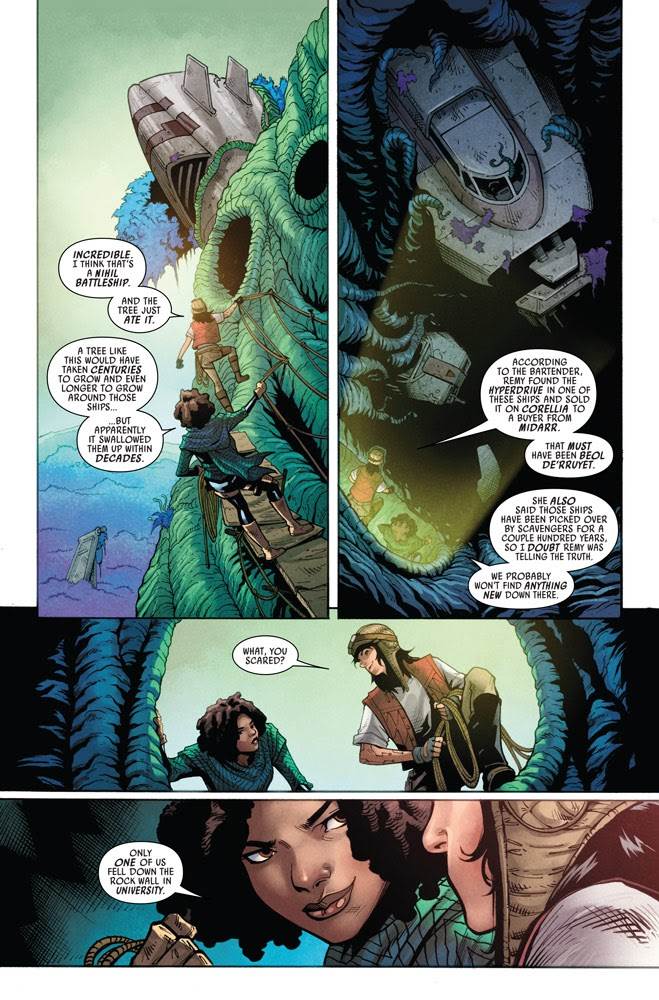