As Marcy tries to be accepted by the residents of Wartwood, Polly discovers a new resident of her own in this week’s episode of Amphibia. 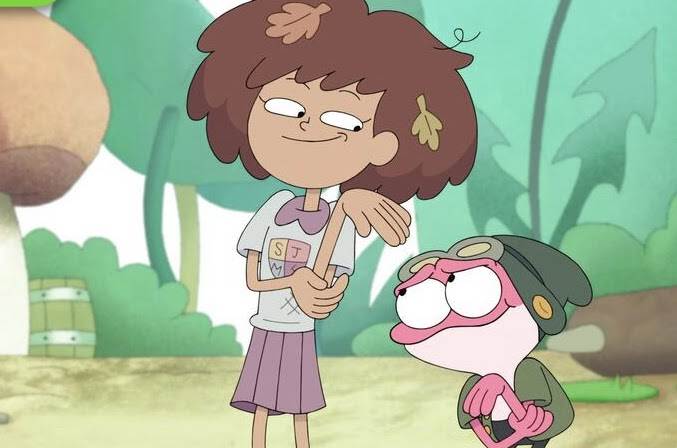 It’s Marcy’s first day in Wartwood, and she is out exploring the town and its residents. When Anne shows up to join her, Marcy is full of fun facts from her explorations, including the fact that small towns don’t take kindly to strangers, meaning Marcy doesn’t stand a chance at being accepted. Especially after she accidentally knocks over a statue of the town founder. She does fix it though, winning a “spit of approval.”

Taking this as her cue, Marcy sets about to fix and upgrade the town to win over the people of Wartwood. She still hasn’t done enough though, so when Mayor Toadstool sets out to revamp the town into a tourist attraction, Marcy (despite Anne’s reluctance) is quick to jump in and start the work.

Overnight, Marcy outfits every residence with a new front facade made of imported Newtopian Marble, a solid gold statue, and even a new train station (which might look a little familiar) complete with toad face designs in the floral.

The weight of all the new construction is too much for the tiny swamp town to bear and the town begins to sink. Marcy, accepting that this is mostly her fault, says she may not be able to save the town, but at least can save some lives, and calls upon Joe Sparrow to help round up the residents, and save everyone.

One resident approaches Marcy and says that the town is pretty mad at her, calling her a walking disaster that doesn’t know when to quit, but also says that she’s just like Anne (whom they all love) when she first got to town.

Anne and the Plantars, with Marcy in tow, head over to the seed store. Marcy is excited to head to the store with Hop Pop, but Polly just wants to be out causing mischief. Sprig and Anne are playing video games but are left responsible for Polly, who then blasts seeds all over the outside of the store. As they are responsible for her antics, Anne and Sprig must now clean up the mess, allowing Polly to bounce away unnoticed. She comes across the town fountain, wanting to create a big splash (but she doesn’t) to cause mayhem, but quickly realizes mischief is no fun alone.

Near a town trash heap, she comes across a mysterious creature that mimics her every move, realizing it's similar to the robots of Anne’s video game, but like a frog. She names the creature “Frobo,” and starts trying to figure out everything he can do.

Upon discovering his skills, Polly and Frobo set about the town causing mayhem, but due to Frobo’s size, they also caused a lot of property damage and destruction along the way.

They return to the town fountain, and now Polly can get the large splash she originally wanted. As Frobo takes the jump, Polly realizes this whole thing might have been a bad idea, and his splashdown attracts the entire town’s attention. They all fear this new monstrous creature, and Polly tries to get him to do a trick, which happens to come in the form of a laser blast of a weather vane, causing more panic.

The townsfolk charge Frobo, with one resident accidentally kicking Polly on the way. Although the resident apologizes restating it was an accident, Frobo saw his only friend being harmed and has now targeted the townspeople as enemies. He goes rogue and starts chasing the town, destroying everything with his laser beams shooting out of his eyes.

Anne and Sprig finally arrive on scene and try to stop Frobo before he hurts anyone, but are eventually cornered by the giant robot. Polly jumps in to save the day and stop him, and Frobo picks up Polly and musters the programming to say her name, his first word. Polly defends him as the town wants to tear him apart. After some convincing, Mayor Toadstool suggests that the town has already accepted two monsters, what's a third?

Unphased while all of this has happened, Hop Pop and Marcy leave the seed store and step into a town turned to rubble, with Sprig, Polly, Anne, and Frobo centered in the middle of it. Polly begs Hop Pop to keep Frobo, with him showing off his planting and cropping skills. Hop Pop’s eyes widen and immediately welcomes Frobo to the family.

Anne and Sprig stay back and comment on how first they find underground computers and now this, before coming to the conclusion that this might have something to do with what got built in the ruins of disaster. At least it could be, right?

The latest episode of Amphibia is available now on Disney Channel and the DisneyNOW app.