Two stories full of wacky hijinks at (or near) the Green family farm that are capped off by suspiciously emotional moments round out this season of Big City Greens. 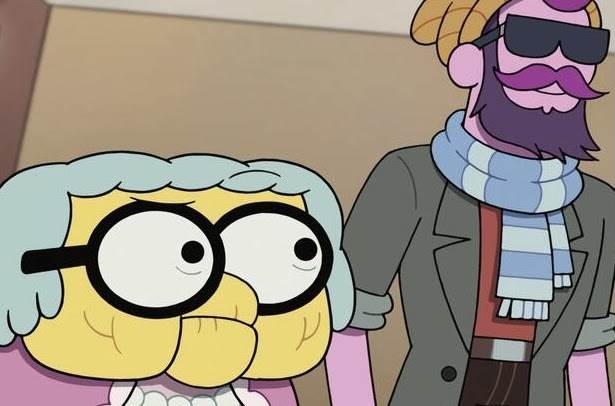 While Cricket is destroying the house while turning himself into a literal human wrecking ball, he knocks over an old photo album and sees a picture of his favorite cousin, Cousin Jilly. Viewers will notice immediately that Jilly looks an awful lot like Tilly, just wearing a pair of sunglasses.

This theory is confirmed when Tilly sneaks away to tell Sackson that Cousin Jilly is a character she made up when she noticed that Cricket was getting bored back home in the country. Problem is, Cricket still thinks that Cousin Jilly is a separate person. He suggests writing to her so she’ll come visit, and she dusts off the old sunglasses and pops in for a visit.

Meanwhile, Nancy is over at the house, making herself at home much to Gramma’s chagrin. It’s her house, not Nancy’s. Nancy twists Gramma’s words, and says that if she’s the guest, that makes Gramma the host, and asks the host for some tea.

Outside, Cricket is having a blast with Cousin Jilly before realizing that he should probably go get Tilly to join them. This ends up as the predictable back and forth where Tilly runs off to “go get Jilly” and vice versa so that Cricket will never catch on to the scheme. Tilly says she is going to take a nap, and creates a dummy of herself in the bed when he sees Jilly again and starts to wonder why they are never together. Then, he puts it all together…. Tilly and Jilly must not like each other! He can’t stand for that, he wants them to be amicable. He goes into the bedroom to wake Tilly and Jilly jumps into the bed and starts arguing, going in and out of the blanket with the sunglasses coming on off as Tilly essentially argues with herself. She eventually sets up the sunglasses just right on the mirror so that Cricket, in the darkness of the room, will see both Tilly and Jilly at once. Cricket demands that they get along and hug each other, saying they are both cool people with different strengths and weaknesses though admittedly, he doesn’t know who to root for. As he pushes Tilly toward the mirror, the sunglasses are knocked over and the charade is revealed.

Back in the living room, Gramma is giving Nancy the full spa treatment when has enough. The pair start arguing and Gramma realizes that despite everything, she is still the mother of her grandchildren, so Nancy is something more than an average houseguest. Nancy apologizes, and openly admits that she should be better about respecting the house that isn’t her own.

Outside, Cricket is still trying to process that Tilly had lied to him for so long when she comes to apologize, adding that she didn’t just pretend to be Jilly again for Cricket, but for herself too. She missed all the adventures that they had together back home while Cricket was still so young. Cricket understands, and asks Tilly if he can read the letter to Jilly that he never got the chance to send out before she came to visit.

In the letter, we find out that Cricket was grateful for all the memories Jilly helped him make growing up and believed they shaped him into the gentleman that he has become today. Of course, this letter is read as a voiceover over a montage of Jilly(Tilly) and Cricket playing while they were younger, ending the episode on an emotional note.

Gloria is rehearsing a pitch to the Greens showcasing a french cafe that she wants to open, explaining to them that it has always been a lifelong dream of hers to open one. Gramma thinks that Gloria doesn’t have what it takes to run her own business, let alone get a loan.

Gloria heads to the bank of Big City and immediately gets rejected for her loan. Cricket and Tilly think they hear a wounded animal nearby, but it’s just the sounds of a devastated Gloria. Outside of the former location for Big Coffee (and Wholesome Foods) next door, the siblings try to console her. They eventually realize that the location is still unlocked, and Gloria gets the idea of turning it into a temporary (and illegally run) coffee shop with a French Revolution theme.

Cricket spreads the word about the new cafe through the city, forming a line along the alley heading to the back door of Gloria’s new cafe. Tilly serves as the door host, in costume of course. The cafe is doing well, until Bill, Nancy, and Gramma show up thinking that there are squatters living next door. Surprised to see that Gloria has opened up shop so soon, the family congratulates her on getting the loan, and Bill gives her a gift and installs a new sign above the shop.

This, of course, happens as Officer Keys is driving by and needs a cup of joe and decides to stop and try out the new cafe. Before he can get out of his car though, Cricket has removed the sign and locked the doors, arousing suspicion.

Also suspicious, are the Green family adults, who just watched Gloria destroy the new sign right in front of them. Gramma still thinks Gloria doesn’t have what it takes, as she is running around frantically.

Keys sees the realtor cards outside of the building and calls Don and Dawn so he can investigate. Gloria is running around to keep from getting shut down and gives all her customers bed sheets so that when Keys and the Realtors show up, they can pretend to be ghosts haunting the building.

It works. The trio run out of the building scared.

The Green adults still think this is a very odd way to run a business, and run into a hipster outside of the building looking for a new place to get coffee that everyone is talking about. Bill, thinking he is being helpful brings the hipster inside so Gloria can have another new customer. When she erupts about him using the front door again, Bill and Nancy explain that they were just trying to help before Gloria breaks down and explains that she never got the loan, that she was only going to run the illegal store until she got enough money to do everything the right way.

Tragically the hipster Bill was helping was right there to hear all of that, and turned out to be Officer Keys in disguise doing detective work after still being suspicious about the haunted building after none of the ghosts said “Boo.” Gloria is taken to jail, and fortunately for her, she made enough money in the shop to cover all the fines and fees.

The family all return home and find Gramma is sitting on the porch swing waiting to say something to Gloria before she can go back into the house. Gloria doesn’t want to hear it, expecting it to be the same ol’ “You don’t have what it takes” bit again. Gramma instead yells at her for lying to everyone who supported her, bending over backwards, breaking the law, and doing whatever it takes to achieve her goal. Something a Green would do. Gramma admits she was wrong about Gloria, and says she has money saved from her retirement that she would like to give to Gloria as an investment. Gloria, bewildered, collapses and hugs Gramma Alice and we then see the family cleaning up shop next door as the episode ends. Since this is the season finale, I think that season three will feature at least some adventures and shenanigans that will come out of the Gloria + Green (not the Gloria Green!) Cafe.

The latest episode of Big City Greens is available on Disney Channel and the DisneyNOW App.