Mayor Toadstool’s fondness for Wartwood is growing and Marcy and Maddie start their own coven without the help of Maddie’s sisters in this week’s Amphibia. 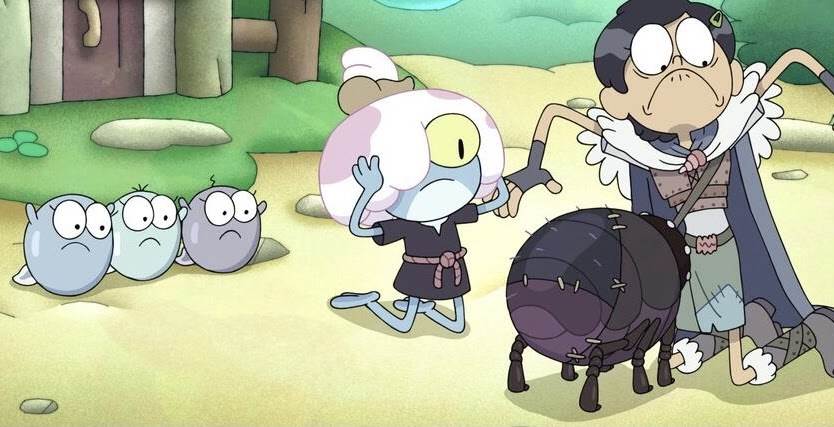 Mayor Toadstool is enjoying his town, and suggests using money to fill potholes instead of embezzling it. Toady fears that something is wrong, but Toadstool reminds him that ever since the incident at Toad Tower, most of the townspeople are seeing him differently, and it’s rubbing off on him.

An Emissary from Newtopia has arrived in Wartwood and is offering Toadstool the job of his dreams, Head Toad of Toad Tower. With the job comes a giant chest of treasure (that can also be used for…personal reasons.) Upon learning that Toad Tower will be rebuilt outside of Wartwood, he begins to question whether or not he wants it.

Anne shows up to the Mayor’s office looking to take care of Hop Pop’s unpaid parking tickets, and Mayor Toadstool asks some advice about his current situation. Knowing he can’t turn down the job or be sent to the deepest, darkest, dungeon in all of Amphibia, Anne suggests that he does what she would do whenever her mom asked her to do chores, and just do a really bad job.

A series of schemes involving fake robberies and mole herding all backfire and make him look better than he intended to, securing him as the right choice for the job he was offered. As they are ready to head out to Newtopia, Bog and his cronies show up to take everything valuable they have, threatening to burn the town to the ground.

Toadstool approaches Bog and offers him to be his second in command at the new Toad Tower, winning him over with the treasure chest before smashing his head in the lead, kicking off a battle between Bog, his cronies, and the village. The emissary from Newtopia comes out and says that Toadstool is too soft for the job, he loves the town too much. She walks over to Bog and says that he has the cutthroat attitude the head of Toad Tower needs to have, and he takes the job.

Seems that Toadstool and Toady are stuck in Wartwood but they’re not complaining, but the future isn’t too bright with Bog in command.

Maddie is annoyed by her sisters while she’s trying to create spells and other witch antics, asking to play tomorrow. She needs to bring a pet flea back to life after all. Maddie used to juggle the three sisters and that's all they want again, but she’s too busy.

Marcy is in the woods studying the plant life and comes across the screams of spells gone wrong since the sisters were bored and started wreaking havoc, with Maddie demanding that they go away and just grow up. Marcy comes in and asks what's going on, saying she read Cynthia Coven books growing up. Maddie is excited that someone shares her interests and asks Marcy to be her apprentice while they bring the flea back to life.

The sisters have been watching the whole time, getting jealous that their older sister has a new best friend. They start getting into Maddie’s spellbook (damaging it in the process) to find a spell that will make them grow up. However, the spell they find is simply a growth spell.

As Marcy and Maddie are resurrecting the flea, a substantially larger sister bounces in and seems to crush the flea. The other sisters bounce in too for a game of hide and seek, but due to their large size, are very destructive as they head toward the village. Marcy wonders why they used a half-baked growth spell on themselves when it dawns on Maddie that it's because she told them to “Grow up.” Problem is, the sisters performed the spell wrong and continue to grow in size, and will eventually become so big that they will explode. The sisters continue to increase in size when they realize that something is wrong. Marcy and Maddie are making the antidotes when Marcy suggests they make four. Why four? For Maddie, who now is growing so large in size to stop her sisters. She approaches them and does their favorite thing, juggling them. While juggling, Marcy throws the antidotes into the sisters mouths, shrinking them back to their original size before the last antidote goes to Marcy. The sisters say that they’re sorry for being horrible, but Maddie says that she was the horrible one, and promises to make time for them, just as the resurrected flea comes wheezing into town, not crushed after all.