In just four issues, Marvel Comics’ Star Wars: The High Republic title has proven itself to contain just about everything I want out of a Star Wars comic book– especially surprising considering I was fairly hesitant going into this series due to my general disinterest in members of the Jedi Order as characters.

But Star Wars: The High Republic #4, out today, really solidifies my admiration for Cavan Scott’s writing and the illustrations by artist Ario Anindito. In fact, I’m prepared to go so far as to say this title may have taken the top spot among my favorite current-running Star Wars comics. Issue #4 opens with a flashback to Jedi Master Sskeer’s training of his then-Padawan Keeve Trennis, echoing a technique used in Charles Soule’s initiative-launching novel Star Wars: The High Republic – Light of the Jedi. Then we return to the “present” where the ending of #3 left off, and Sskeer having been taken over by the villainous sentient plants known as the Drengir– menacing antagonists indeed, as they evidently have the ability to corrupt the minds of the Jedi. We get a bunch more welcome information about the Drengir here, including the fact that they once allied with the Sith (Good to know!) before they were betrayed by the Jedi’s dark-side counterparts. There’s also a visual confirmation that the derelict space station visited in Claudia Gray’s Star Wars: The High Republic – Into the Dark is indeed the same as the one Snoke uses as a base of operations in Soule’s Star Wars: The Rise of Kylo Ren comic miniseries. I’m absolutely loving the interconnectedness of all this, and for that reason I dig that the Jedi characters of Vernestra Rwoh and Imri Cantaros from Justina Ireland’s Star Wars: The High Republic – A Test of Courage show up to investigate the mysterious death of a Hutt crimelord as depicted in earlier issues. Speaking of the dead Hutt, this issue gets pretty gross– not complaining, mind you, just pointing it out– and there’s some potentially disturbing stuff both in the autopsy sequences and back on the planet Sedri Minor where the Drengir and Sskeer have taken the other Jedi characters captive. But it’s all part of what makes this comic stand out from its contemporaries: it’s absolutely willing to take chances. For example, I love the reveal that even though he’s capable of breaking free of the Drengir’s influence, Sskeer may be permanently attached to his new plant-based limb. That’s something I definitely wasn’t expecting, and I really appreciate the idea that things aren’t always going to return to the status quo in The High Republic. Now the Jedi have to battle an enemy whose physical destruction will cause psychic pain to one of their own– that’s a rather intriguing concept. Plus, Sskeer still seems to be struggling with control over his Drengir-sourced dark-side tendencies, which is extremely compelling to me as a reader, and the cliffhanger conclusion to this installment has me chomping at the bit to pick up the next one, as it reintroduces a faction (and some creatures) I’ve been wanting to see a lot more of in Star Wars lately. It will be very cool to see what they’re up to in this era, and I can’t wait to find out what happens to this series’ protagonists as the story continues in coming months. To me, all that adds up to a highly successful run so far, so here’s looking forward to more. 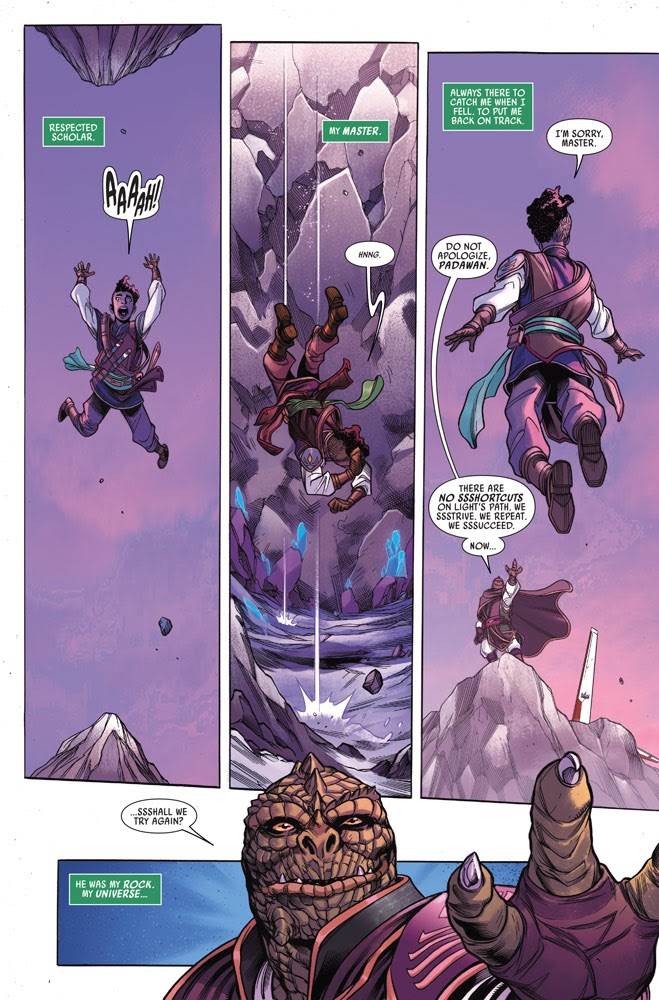 Star Wars: The High Republic #4 is available now wherever comic books are sold.