Tonight, ABC’s newest comedy, Home Economics will premiere — and, despite the title likely triggering memories of junior and high school days for many Millennials, it isn’t a series about education. The show follows three recently reconnected adult siblings living in the Bay Area with very different financial situations. Tom (Topher Grace), Sarah (Caitlin McGee), and Connor (Jimmy Tatro) Hayworth are close in age and have some shared experiences. All three are married with children but their lives have gone in different directions. Tom’s a novelist who’s struggling to write a bestseller; Sarah is a therapist for low-income and at risk youth whose financial stability is challenged when she loses her job; and Connor, well let’s just say he lives in Matt Damon’s old house, and he definitely needs to remind everyone of that fact. Connor has lucked out with business investments and is by far the wealthiest of the trio. While the show focuses heavily on the siblings, their children and spouses—Tom’s wine-loving wife Marina (Karla Souza) and Sarah’s perceptive wife Denise (Sasheer Zamata)—bring much needed conflict, advice, and humor to the story. And let’s not forget mom and dad (Nora Dunn and Phil Reeves) popping up occasionally for a video chat. As one would expect, they’re a little technologically challenged, and slightly out of touch making comments like “we were all homophobic back then!” It might not be the most original attempt at humor, but in any case it’s relatable.

Akin to Carrie Bradshaw’s narration on Sex and the City, the voiceover viewers hear throughout the show belongs to Tom as he pens a new novel… that just seems to include his recounting of recent events he’s experiencing with his reunited siblings. While this framing is fitting enough, it also feels unnecessary as most audiences have grown accustomed to accepting narration without explanation. Additionally, while the show teases some potential tension that could arise once Connor and Sarah learn the true nature of Tom’s latest work, this too feels superfluous. Yet, these small gripes don’t distract too much from what is otherwise a fun and witty ride. I don’t know if it’s separation from my own siblings and wanting to reconnect that makes this series a win for me, or if it’s just the characters and storyline, but Home Economics is surprisingly enjoyable. I had the opportunity to screen three episodes and I watched them all. There’s plenty of physical comedy sprinkled throughout, usually with Tom being clumsy resulting in the collapse of a bouncy house, or a trip and fall on a running treadmill. These gags don’t work particularly well, but I’ll give it a pass as the show finds its footing. 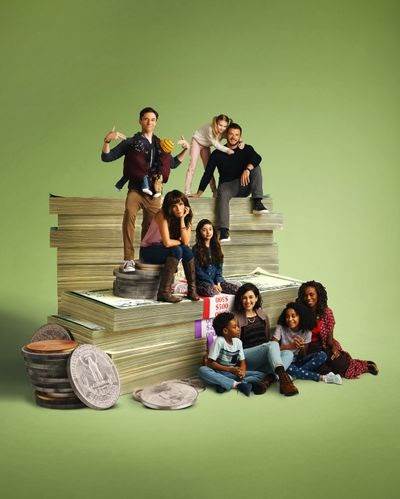 Home Economics perfectly taps into the sibling dynamic and how the need to be noticed doesn’t go away as we age. It touches on a variety of relevant topics including asking siblings for a loan, helping a child through divorce, navigating the stark contrasts between financial lifestyles, and being supportive of the challenges someone else is going through. There’s so much potential for future stories that are timely and close to home. I’m enjoying the journey so far and can’t wait to see where the series goes.

I give Home Economics 4 out of 5 Matt Damon references.