Book Review: “Aru Shah and the City of Gold”

Aru Shah and the City of Gold brings readers on an emotional rollercoaster with thrilling moments that have fourteen-year-old Aru Shah coming to grips with the actions of her parents while trying to save the world from ancient demons of Hindu mythology. 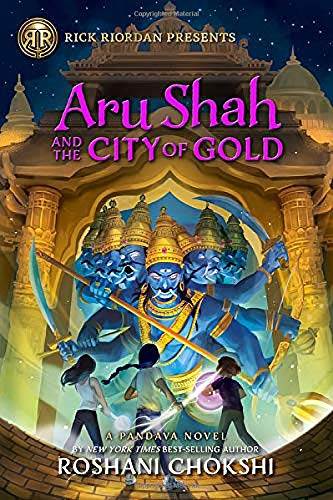 In this fourth book in the series, Aru has woken up at the Sleeper’s home and a mysterious girl named Kara is watching over her. Not sure whether to treat Kara as a friend or foe, Aru is filled with mixed emotions about trusting this new person. She wants to escape, and Aru needs Kara to help her flee the Sleeper’s palace.

Back home in Atlanta, the situation is grim. The Sleeper is advancing with an army, and the Otherworld is closed off to the Pandava’s. Their mentor Boo has betrayed them, and the people and gods of the Otherworld have lost hope in the Pandava’s abilities to protect them. Nothing appears to be able to stop the Sleeper from winning.

The Pandavas only hope is in Lanka, the City of Gold. Their godly mentors Urvashi and Hanuman are imprisoned in this kingdom ruled by Lord Kubera. The Pandava’s must free their godly mentors and win the right to Kubera’s army. Kara joins the group and though she is not trusted at first, her worth and strength is soon relied on by the Pandavas. The group needs to function like a team, or they will all be defeated.

Ratcheting up the tension and suspense throughout the book, author Roshani Chokshi has a difficult task with Aru Shah and the City of Gold. She must maintain a high bar set from the publication of her first book in the series, but not give away too much prior to the fifth and final book to come. Chokshi has done a brilliant job in taking each book as not only a chance to help the Pandavas grow in their skills but help them grow emotionally.

The Rick Riordan Presents Imprint was founded on the belief of telling more diverse stories by authors of different cultural backgrounds. Roshani Chokshi was the first author to publish a book under this new imprint at Disney Books, and she has faithfully delivered an epic tale featuring Hindu mythology that is accessible for all readers but also a compelling narrative that pinpoints and reveals the inner struggles that many teenagers face.

Roshani Chokshi’s Aru Shah series is a flawless success for staying consistent in quality and for giving us complex and dynamic characters that readers of any age will identify with. In Aru Shah and the City of Gold, Aru’s biggest struggle is coming to grips with the idea that adults will let you down and even lie to you. The ripple effect of how teens deal with these moments in life can be some of the most difficult parts of their young lives. One is not a little kid anymore. The world becomes a real place, and sometimes what is being done to protect our kids ends up hurting them the most.

Aru is conflicted about her father. Possessed by the Sleeper, he wants to conquer the world and destroy the gods, but he’s still her dad. How Aru reconciles the good man who was trying to avoid his fate and keep the family together with the monster he’s become is an impossible task for a teenager.

To make matters worse, the one constant in Aru’s life, her mother, has disappeared. Aru struggles to carry on in her role as a Pandava sister. At times she would rather walk away because of the hurt she has experienced. Alone for the first time, Aru must make decisions that will have life altering consequences for everyone.

While Aru is the star of the series, her relationship with the other Pandavas, Brynne, Mini, Nikita, Sheela, and Aiden are an essential ingredient to this brilliantly exciting tale. These kids nurture each other and guide one another to maturity. For a teenager who is struggling to see beyond her hurt, Aru has come to rely on this supportive group of friends.

Roshani Chokshi gives life to these kids and endows them to be wise and understanding to some complex emotional issues that many adults have failed to grasp. What makes Aru Shah and the City of Gold so compelling is that this friendship of the six contains dialogue that is real and genuine. Chokshi offers action packed adventure but gives readers a chance to see inside the mindset of a teenager. While the battles are epic, we learn that some of the most consequential and important decisions for Aru Shah will be rooted in her relationships with her friends and her faith in her parents.

Aru Shah and the City of Gold is another 4 star epic tale. By switching the gender roles and introducing middle grade readers to Hindu mythology, Roshani Chokshi has elevated literature for young and old readers alike.