TV Recap: “Raven’s Home” – Levi Prepares for His Big Role in “Plays of Our Lives”

Disney Channel debuted a new episode of Raven’s Home today on the DisneyNow app called “Plays of Our Lives,” a twist on the long-running NBC soap opera. In this episode, Levi is stressed to be starring in a play, especially when Booker’s vision makes it seem like he’ll be a failure. Here’s a recap of this brand-new episode. 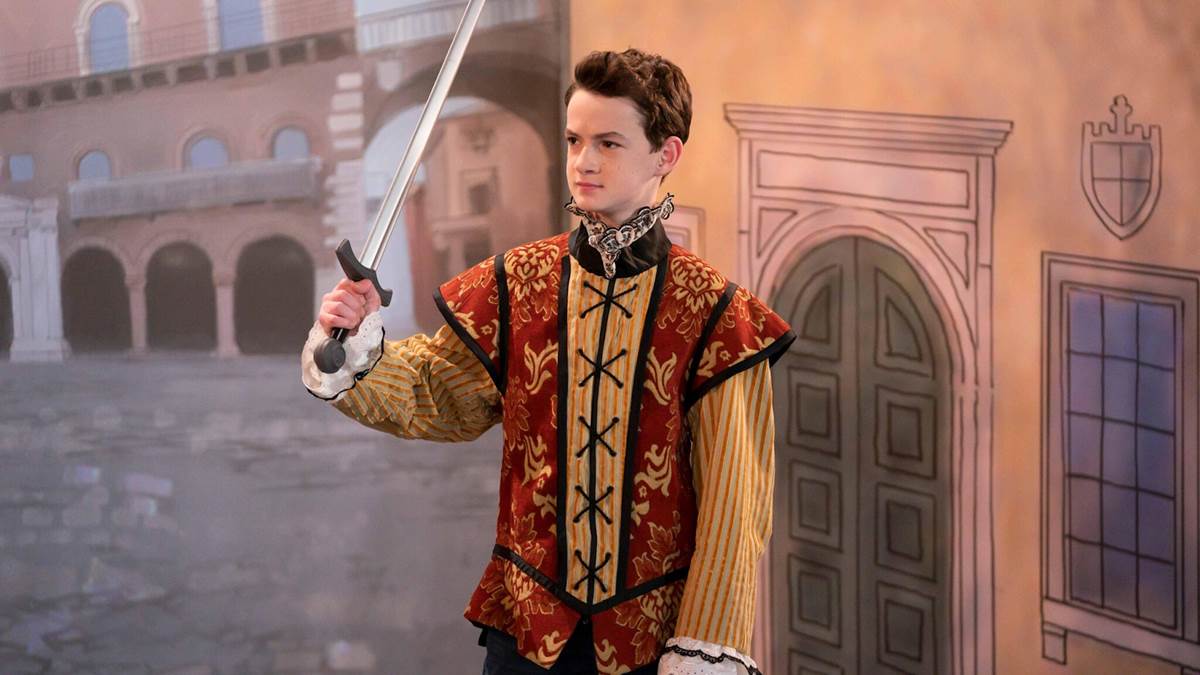 It’s clean up time in the apartment and Booker and Raven are singing a song about it, but Levi is agitated. He says he has a lot on his mind, reminding everyone that he’s been cast as Mercutio in the high school production of Romeo & Juliet. They’ve all heard a lot about it, with Nia telling him he doesn’t have to mention it because she’s the stage manager. Levi says that his understudy, Griffin, is always waiting for him to fail to get the part. Chelsea is overjoyed about her son’s casting, telling him it’s his legacy to follow in her theatrical footsteps, bragging about having been the “Understudy to the lead in the off-Broadway touring company of ‘Bats.’”

Tess and Ramon are helping to paint sets at school, but they each grabbed a different color, blue and purple, and realize they don’t know which is right. Nia walks in and says it should be “Terracotta yellow,” with the couple getting defensive and saying it’s “Burple” because she wasn’t there. Nia is flushed because she saw Wyatt in the hallways even though debate season is over. He enters the theater and tells her he called after her in the halls, but she ran.

Levi is practicing his lines while Griffin lurks in the corner listening. Booker startles him and Levi reveals that the director is a big fan of his mom’s work, which is the only reason he, a middle schooler, was cast in such a big role. He tells Booker his previous acting experience was playing a gym coach with two lines. Booker offers to help him practice, noticing Griffin and agreeing with Levi that he’s intense.

In the apartment building, Raven found a cat and uses an old gerbil carrier to return it to her neighbor, who has other childless adults over enjoying “Fancy cheese.” She gets a little jealous, making jokes about her kids that make them all laugh. They ask her to join their rooftop open mic, saying she could do stand up and handing her a plate of cheese to go.

In their bedroom, Levi and Booker practice the sword fight that leads to Mercutio’s death scene. Booker thinks he’s doing great, but Levi isn’t pleased with his performance. Booker suggest he talk to his mom and Levi begs Booker not to tell her he’s having trouble, saying she did “Shakespeare in the Parking Lot” and would be disappointed that he’s not living up to her theatrical standards. Just then, Booker has a vision of the director looking sternly at Levi and saying  “After seeing that performance, I’ll have to rethink my casting decision.” In his vision, he also sees Griffin looking excited about it. Booker doesn’t tell Levi what he saw.

Out in the hallway, Booker blocks Chelsea from entering the apartment with her laundry, saying he has something he can’t tell her, but she might be able to guess. She’s excited to play charades as he mimes holding a baby, looking worried, and emoting with his hands. She guesses correctly that Levi is worried about the play and says “It’s okay, everyone gets a little stagefright.” As Booker explains that Levi’s under too much pressure, a delivery man arrives with a dozen roses for Levi and a note from Chelsea reaffirming that he’s continuing her legacy, which she intercepts before he sees it. Booker tells Chelsea what he saw in his vision and she gets worried.

Still getting the set ready, Wyatt comes in again and Nia freaks out. Tess places the blame on Ramon, but she encouraged Wyatt to join the stage crew as an extracurricular activity. He tells Nia he was a stage manager at his old school and offers to give her some pointers. He suggests that the flowers being placed on the sets should be roses because of a line in the play, but Nia says she chose morning glories for a similar reason and they argue about it. Ramon tells Tess that they shouldn’t have interfered.

Booker is helping Levi rehearse for the play while Chelsea secretly watches, motioning to Booker to tell Levi what to do. It leads to Levi adopting a cockney accent like his father’s and it doesn’t go well. Later, Chelsea is watching a recording of Raven’s stand up comedy routine from the roof with Booker and Nia, who get upset because all of the jokes are about them. When Raven comes in, they tell her they’re embarrassed and ask her to stop making jokes about them. She tries to make one up about something else, traffic, and it isn’t as funny.

It’s the first night of Romeo & Juliet and intermission just started. The director asks Levi where the kid he cast went, asking him to drop the accent and use his normal voice. Griffin is standing by wearing the same costume as Levi. Booker, giving him advice, uses words that only Chelsea would say and Levi realizes what happened, getting upset that Booker lied to him and got his mother involved.

Booker runs out into the auditorium looking for Levi, who he says ran away. Raven and Chelsea get involved, with Raven doing stand up while Booker and Chelsea go look for Levi. Raven starts with her traffic joke and Booker gives his approval for her to use jokes about him. Chelsea and Booker find Levi backstage trying to get out of his costume, who tells them that all of their help made him nervous. Chelsea tells him that she’s proud of him no matter what, saying that he just needs to do his best, but doesn’t have to live up to her legacy. She gives him a hug as Booker apologizes. Having made up, Booker and Levi stand on stage behind the closed curtain doing a silly dance.

Meanwhile, Nia and Wyatt are having a disagreement about the speed with which they should open the curtain when intermission is over. He asks her why she wants to argue every suggestion he makes. “I’m not fighting with you Wyatt, I’m flirting.” Wyatt says he likes her, too, and in their surprise, they both let go of the ropes, causing a sandbag to fall and the curtains part quickly, revealing Booker and Levi to the audience. They freak out and Booker tosses Levi a sword, starting the death scene they’d been practicing. Levi does a great job and the audience applauds.

Backstage, Tess finds Nia and Booker both taking fault for what happened with the curtains and Tess feels like her plan to have Wyatt join the crew worked. The director approaches Levi with Griffin in tow, saying “After watching that performance,  I’ll have to rethink my casting decisions.” Griffin looks elated, but then he continues, saying that he just saw Levi’s raw talent, even though he died an act too early. Griffin’s smile drops and he looks mad as the director tells Levi if he does a good job in the rest of the shows, he could be the lead in the next play. Chelsea coes backstage with flowers for Levi and the director gets excited to see Chelsea, who’s work in “Bats” inspired him to get into the theater.

That night, Raven makes a celebratory dinner for Levi, hoping that the family will also celebrate her success as a stand up comedian. She offers to let them roast her and Chelsea stands up, with the episode ending before she starts.

Raven’s Home will return with another episode on April 23rd titled “The Slumber Years.” Here’s the episode description:

Raven reminds the kids to take a break from their screens as they settle into their nightly routines, but Booker, Nia and Levi have other plans.