This week we travel back to 1991 for a film that was ahead of its time, The Rocketeer. A co-production between Walt Disney Pictures and Touchstone Pictures, The Rocketeer found praise from critics but not enough box office success for a sequel. 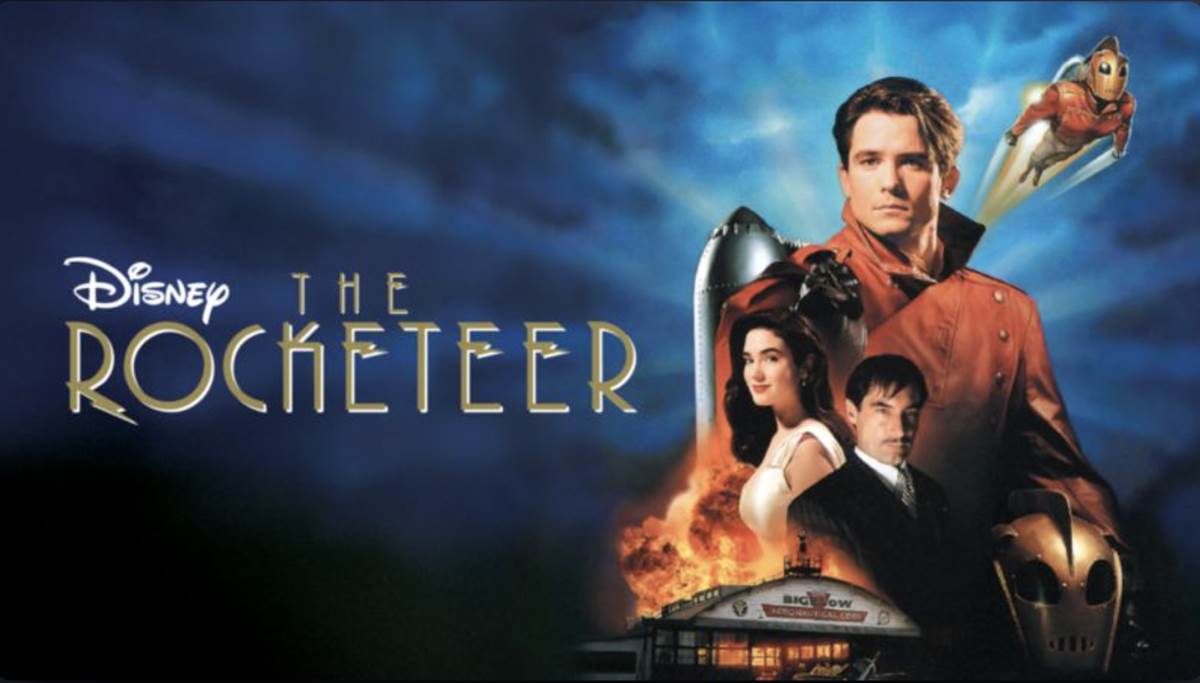 Cliff Secord (Billy Campbell) has just crashed his plane that was going to take him to the national racing competition. All hope is not lost. When gangsters stash an experimental rocket in the hangar at his airport, Cliff finds the mysterious item and with his friend, an engineer named Peevy (Alan Arkin) they rework the rocket and Cliff starts to fly with just the jetpack on his back. After saving a pilot at the airshow, Cliff gets his picture in the paper with a new moniker, “The Rocketeer”, and a whole lot of attention.

The mafia led by Eddie Valentine (Paul Sorvino) are looking for the rocket too. Employed by famed actor/Nazi spy, Neville Sinclair (Timothy Dalton) who is using Valentine and his mob to feed the interest of Hitler and the Nazi war machine.

Howard Hughes (Terry O’Quinn) is also looking for the rocket. As designer of the prototype Hughes knows the Nazi’s plans for his work. While Germany tried to make their own version of the rocket which failed, Hughes prototype is a hot commodity.

Sinclair tries to bait Cliff by kidnapping his girlfriend Jenny (Jennifer Connelly) which results in a fiery clash at the Griffith Observatory. Cliff gallantly fights Sinclair on a Nazi zeppelin saving the day with Jenny, Peevy, and Howard Hughes. The FBI and Eddie’s gangsters join forces to shoot it out with Sinclair’s Nazi troops.

The film is a joy to watch. From the soundtrack to the scenery, The Rocketeer brings 1930’s Los Angeles to life. The scenery turns Hollywood into something magical, with the South Seas Club, the Bull Dog Café, and even the very real Griffith Observatory. As a viewer I want to step inside the television and visit this imaginary world.

Alan Arkin and Terry O’Quinn could not have been better cast for their roles. They bring intelligence, ingenuity, and power to their supporting roles.

Timothy Dalton is an excellent villain. He has the suave personality to be the mega star Neville Sinclair, but his turn to Nazi villain is perfect. It is easy to believe that Sinclair inhabits both worlds so seamlessly thanks to Dalton’s skill.

Billy Campbell and Jennifer Connelly are perfect as Cliff and Jenny. It is easy to see Cliff fall into the role of the Rocketeer, and Connelly makes Jenny standout from not being the damsel in distress character. There are multiple times where it is Jenny who saves Cliff.

I have loved this film since I first saw it when I was eleven, and I still love it now. If you are not a fan of period pieces, or pulpy comic book inspired films, then maybe The Rocketeer is not for you.

The Rocketeer gets an outstanding 4 Golden Popcorn Bucket rating. This is a film worth watching multiple times. It radiates joy with its happy ending and excellent performances. If Disney+ is looking for a film to reboot into a series, The Rocketeer should be the number one contender.

Next week we wander into the Amazon to look for the cure to cancer with Sean Connery and Lorraine Bracco with Hollywood Pictures 1993 film, Medicine Man.