The Rick Riordan Presents Banner at Disney Books has another hit on their hands with Graci Kim’s newest work The Last Fallen Star. Readers are introduced to the world of thirteen-year-old Riley Oh and her life in a world of Korean witches in modern day Los Angeles. 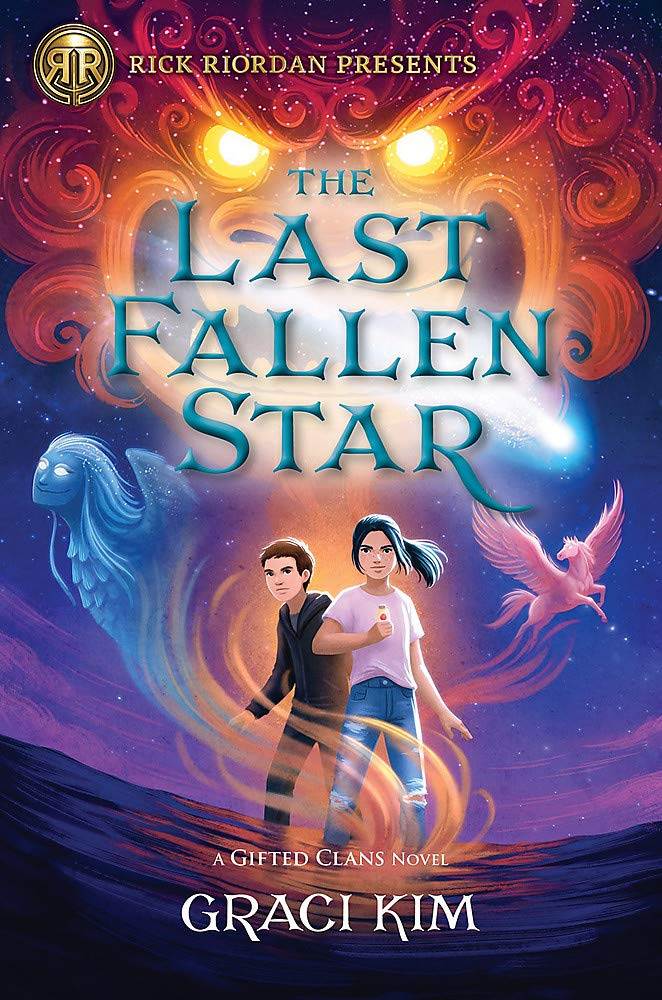 Life is a struggle for this teenager. Riley is the adopted daughter of loving parents who happen to be Gom (healer) witches. From the time she was a baby this is the only family Riley has known. Her loving adoptive parents and her sister Hattie have taught her the different spells that Gom witches use to heal. The problem that Riley has is that she is saram, a non-magical being. From the sidelines of life, Riley watches Hattie prepare for her initiation ceremony as a Gom witch. Riley is excluded from this tradition because she is a saram.

Teenaged confidence leads Riley and Hattie to concoct a plan to use Hattie’s initiation ceremony as the opportunity to cast a spell that would share her magical powers with Riley. When the scheme goes awry, Riley’s parents tell her the truth about her past. It turns out that Riley is a member of the banished clan of Horangi witches. This act of teenage rebellion sets off a chain reaction, placing Hattie in danger and Riley on a godly quest to find the Last Fallen Star, a weapon of immense power that the Cave Bear Goddess wants in exchange for saving Hattie. With only a couple of days to save Hattie, Riley and her friend Emmett must confront their own painful past to save the future.

Riley Oh is a fascinating character. She is filled with doubt that has her hiding from everything and everyone. She feels like she does not belong because amongst a world of magic, she is normal. For all her life, Riley believes herself to be the odd duck because of a lack of unique talent. As she watches her family and friends excel, it must be crushing for Riley to try and stay positive in this environment. She may have a sister who is her best friend and loving parents, but when you struggle to find your place, all the love in the world does not matter. Graci Kim has not only created a complicated character with depth, but she brings readers into the world of Riley Oh and helps us to walk a mile in her shoes.

Everyone, no matter their age, struggles to find their place in the world. Riley is our vessel into this witch world, and it is painful to watch this young girl who has good friends and family, see herself as an outsider. The world challenges us to find our place but imagine for a moment if your world is filled with people who wield magic, and you have been told since your birth that you are different.

Author Graci Kim takes the teenage angst that all kids feel (and adults) and magnifies the difficulty for her protagonist by placing her in a world that is magical. The feeling of being an outsider is universal, and the message that Kim brings to the book is applicable for all readers. To succeed you must be comfortable with yourself.

In this magical world of witches, Graci Kim has taken a very real issue of teenage anxiety and magnified the difficulties that all kids face during this age, while also creating a character that has a deep devotion to her family, and a willingness to face the most difficult truths.

Riley is not alone on her quest. Emmett, her best friend has joined her reluctantly, and both he and Riley share a past where their lives were altered by the revolt of Horangi clan thirteen years ago. Riley’s parents were killed during this event and so was Emmett’s mom. Each main character has been scarred by the trauma of long ago which formed the characters we meet. This hidden trauma has molded two teenagers who struggle to find their place, so they create an artificial life that keeps them separate from their peers, physically and emotionally. They may be damaged by their past, but Riley and Emmett need each other to mend the hole in their hearts.

As the novel progresses, we start to see the scared Riley disappear and she grows more in the two days she spends trying to save Hattie then in the past thirteen years, for her whole life Riley Oh has been lied to and driven away from the truth about her legacy and what happened to her parents. These lies have been done with the best intentions, but this is the lesson that readers should learn. Deceit conceived in the notion of protecting someone only causes damage and does little to help the one you wish to protect.

Sometimes we must learn to confront the most difficult aspects of our family and the past to live fully today. Riley has always felt like an outsider because that was how her world was set up. The moment that we build illusions about the truth, is the moment that we will scar someone for life. Only when Riley confronts the difficult history, and forces her family to tell the truth, does she feel like she belongs.

Graci Kim has accomplished so much in her first novel for the Rick Riordan Presents banner. Riley Oh is an admirable character that readers will want more from. Readers are brought into a world they most likely knew little about and gain an insight into Korean witches that will rival another famous series about witchcraft and wizardry. Not only do we meet interesting characters, get educated about Korean witches, but everyone will want a magical dragon/scooter named Boris to get from place to place.

The Last Fallen Star gets 4 stars for an outstanding introduction into a whole new world.